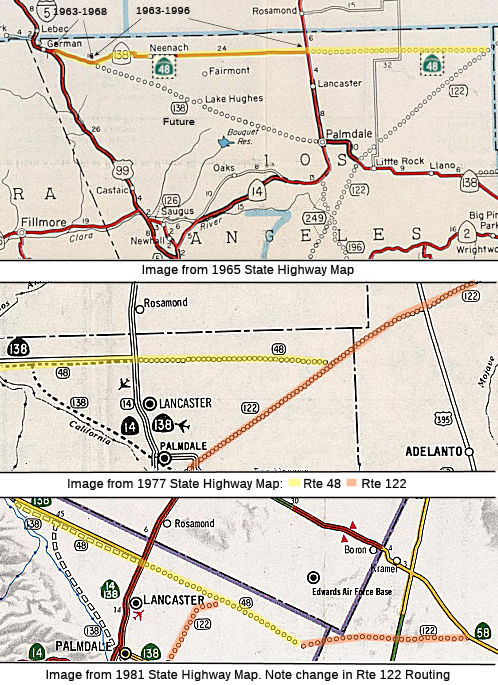 From Route 14 near Lancaster to Route 122 near the San Bernardino county line.

The 1963 alignment arose because Route 138 was legislatively realigned to run along a new alignment along what is modern Los Angeles County Sign Route N2 from Route 138 at Quail Lake southeast to Palmdale, in preparation for the Metropolitan Bypass, which would have run directly to the segment of Route 138 E of Route 14. As such, Route 138/LRN 59 from Quail Lake east to US 6/LRN 23 was given a new LRN 267 designation. During the 1964 Highway renumbering the proposed route of LRN 59 between Quail Lake and Palmdale was assigned to Route 138. LRN 267 to the north was assigned as part of Route 48. By 1967, the path of Route 138 was eventually moved to a new freeway/expressway alignment which bypassed the Old Ridge Route alignment on Gorman Post Road. Eventually there were plans to route Route 138 along Signed County Route N2
(Based on: Gribblenation Blog - California State Route 138)

Although not indicated from the route definition, a redefinition of Route 122 in 1976 created a discontinuity in Route 122 at the point it met Route 48. This essentially extended Route 48 without changing the definition.

In 1996, Chapter 10 truncated the origin even further, beginning the route at "Route 14 near Lancaster". The portion from Route 138 to Route 14 was transferred to Route 138. This just left the unconstructed portion.

A 1965 planning map shows that this was to have been freeway; never upgraded.

This segment was LRN 267 (defined in 1959), and was unconstructed before 1964. Prior to 1964, this segment was signed as part of Route 138, and constituted the constructed portion for LRN 59, established in the 1919 Third Bond Act (Lancaster to Baileys). In 1959, LRN 59 was rerouted to the new Metropolitan Bypass routing through Lake Hughes, and the older routing was renumbered as LRN 267.

In 1921, Chapter 841 authorized the Department of Engineering “...to make an investigation and submit a preliminary report upon a proposed state road with the necessary bridges connecting the city of Vallejo with a point on the state highway near Sears Point in Sonoma County... Beginning at the intersection of Butte and Tennessee Streets in Vallejo, and running thence N-ly along Wilson Avenue to the limits of said city, thence continuing along the paved county roads through the Bay terrace district to a point in the vicinity of the lands formerly owned by Vallejo Brick and Tile Company, thence leaving the mainland and running W-ly across the Napa river to island number one: situated on the immediate W bank of the Napa river and immediately N of Marc island and adjacent to the E short of San Pablo bay; thence NW-ly along said San Pablo shore levee to a point near the mouth of Sonoma creek and running W-ly across Tubbs island and across Tolay creek to a junction with the state highway in the vicinity of Sears point.” It appears that this highway was not added to the state highway system at this time.

In the "great renumbering", Route 48 was subsumed into present-day Route 37. 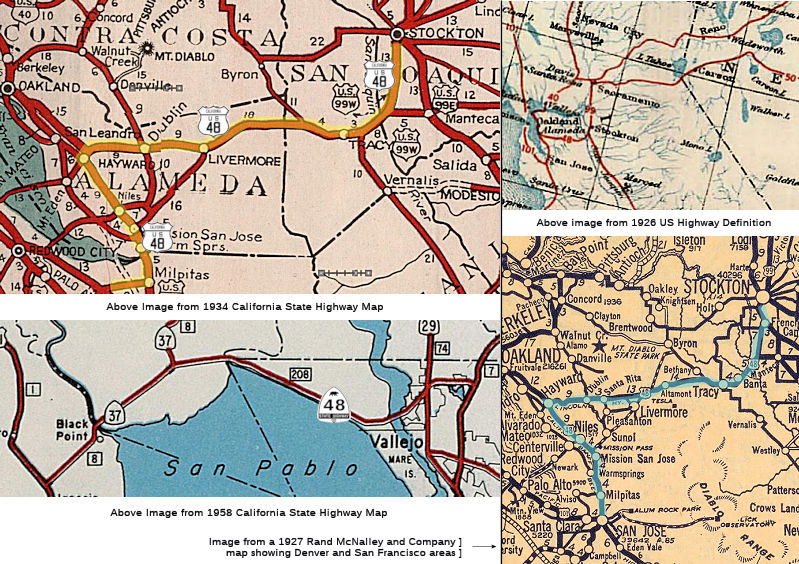 Tom Fearer notes the following regarding US 48:
(Source: Gribblenation Blog: Hunting the early Lincoln Highway and US Route 48 from French Camp west of Altamont Pass)

The Lincoln Highway appears to have been shifted out of Banta by 1918 onto the 11th Street Bypass which can be seen on the State Highway Map of the same year. The route of US 48 was ultimately selected to be routed from French Camp west over Altamont Pass and by proxy San Jose in 1926.  US 48 was largely planned to originate at US 99 in French Camp and travel southwest by way of Altamont Pass to San Jose. US 48 ultimately appears between French Camp and San Jose on 1926/1927 commercial maps. In 1928 State Maintenance of LRN 4 out of Stockton shifted to Mariposa Road.  This eventually led to a request by the State of California to the AASHO to extend the east terminus of US 48 to Stockton and create a US 48N to Oakland.  The request was for US 48 was borne out of US 99 moving out of French Camp to a direct alignment between Stockton-Manteca. The AASHO rejected this concept but offered an alternative which truncated US 48 from San Jose to Hayward and from French Camp to Mossdale. This alternative conceptualized US 101E and the US 99W/US 99E split from Stockton-Manteca. The truncation of US 48, creation of US 101E, and the US 99W/US 99E Stockton-Manteca split was approved in April of 1929 by the AASHO. The State of California made a request to the AASHO to extend US 50 from Stockton to Oakland in 1931. The AASHO approved US 50 to subsume all of remaining US 48 by June of said year. The State of California would not attempt to resolve US 101E and the US 99W/US 99E Stockton-Manteca split by pursuing deletion of those routes until 1932.

West of Livermore, US 48 (LRN 5) continued through Dublin, the Castro Valley, and Hayward, and continued S to San Jose via Mission Blvd. The original plan (proposed in 1910) was to route LRN 5 along Castro Valley Road/Mattox Road, but the decision was made to use a route through Hayward. The first generation of LRN 5 was along East Castro Valley (the old version of Dublin Road, now abandoned) through Castro Valley, and on to Hayward via Grove and A Street. In 1926, LRN 5 became US 48, and in 1930, the state rerouted LRN 5 via Castro Valley Blvd/Mattox Road, bypassing Hayward and building a high-speed connector to Foothill Blvd. It was at this time that Maddox Road was widened to 100'. In 1933, the route was renumbered as part of US 50. It appears the US 48 routing was Dublin Road (Dublin Blvd) to Castro Valley Road, to Foothill Blvd, and then S on Mission Blvd. In 1930, with the renumbering to US 50, the routing changed to run N to Oakland.
(Source: Email from Rick Kelley, 2/23/2021)

This route is unconstructed from Route 14 to future Route 122. There is no paved traversable local highway. For information on the High Desert Corridor, see Route 138.

Note: There is seemingly a Route 48 route marker postmile at the Calaveras-Tuolomne county line on O’Byrne’s Ferry Road between Route 108 and Route 4 near Copperopolis. It is just past the bridge that carries the road over the Stanislaus River. Currently this road is signed as Calaveras County Sign Route E15. The key word is "seemingly", because investigation determined that this is a Calaveras county road marker: The CAL in this case represents the first 3 letters of the County, Calaveras. The 48 is the county road number. Each County-maintained road is assigned a number; they have other similar markers on roads in the County-maintained system. The problem is that this is almost identical to a post mile for Route 48 if Route 48 was in Calaveras County.

The route that would become LRN 48 was first defined in the 1919 Third Bond Act as running from McDonalds to the mouth of the Navarro River. This was captured in the 1935 highway code as:

[LRN 1] at McDonald's to the mouth of the Navarro River

This route was signed as Route 128.