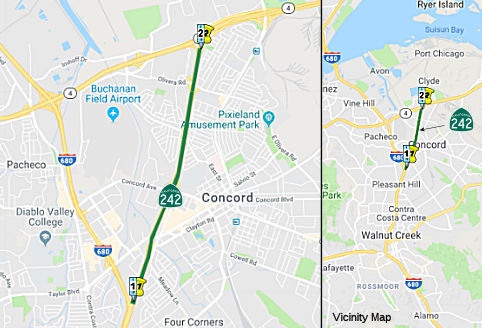 By 1955, this segment (as Route 24) was shown as complete between the Ohmer Hill1 area of Concord (near Port Chicago) south to Concord Avenue, and "proposed" between there and the current I-680 junction in Pleasant Hill. Between Route 21 and the ending of the now-Route 242 freeway, Route 24 took Monument Boulevard, Galindo Street, and Concord Avenue.

1: Locality Naming Note: Ohmer Hill is a current site of a BART station, and used to be a stop on the Sacramento Northern RR. The namesake of the hill, Ohmer Fare Register Company, was a Ohio company that had incorporated back in the 19th century and was in the business of making taxi fare meters as well as those on the Sacramento Northern. The company was merged into NCR. 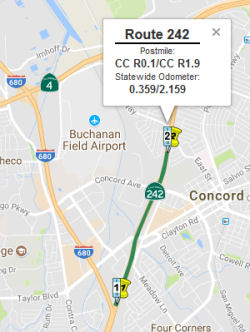 In August 2017, the CTC approved for future consideration of funding 04-CC-242, PM R0.1/R1.9 Route 242/Clayton Road Ramps Project. This project in Contra Costa County will modify and improve the interchange and on/off ramps at the Route 242/Clayton Road interchange in the city of Concord. The project is not fully funded. The estimated project cost is $65.7 million. $34.7 million is currently programmed in the Reginal Transportation Plan. The project start date will be determined when total funding is finalized. A copy of the ND has been provided to Commission staff. The project will result in less than significant impacts to the environment. As a result, an ND was completed for this project.