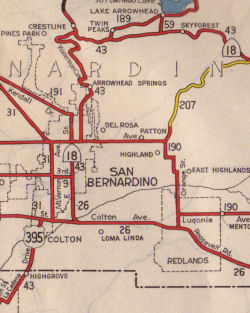 The route that would become LRN 43 was first defined in 1917 by Chapter 697, which called for inclusion in the state highway system of the route "...beginning at a point in Waterman Cyn at the termination of the pavement of the San Bernardino County highway system, thence following the meanderings of the road known as the "Crest Drive" into Bear Valley, ending at a point directly opposite the most easterly point of Bear Lake." The 1919 Third Bond Issue extended the route from Deep Creek to Metcalf Creek, specifically "Deep Creek easterly via Bear Valley Dam to the county road at Metcalf Creek in the Angeles National Forest (Arrowbear to the Eastern End of Big Bear Lake)." This ran along the N side of Big Bear Lake.

In 1931, it was extended further, from [LRN 43], Waterman Canyon via Santa Ana Canyon to Newport Beach. This was a routing from San Bernardino to the coast through the cities lying northeast and southwest of the Santa Ana Rivers. It represented the most direct line to the coast through an area that includes Colton, Riverside, Corona, Santa Ana, and Orange. The route was well-fed by local inter-community and inter-county traffic. There was also a large amount of recreational traffic seeking the mountain through San Bernardino, Redlands, and Riverside. As there was rapid development in the area, the state wanted to adopt the route while they could.

It is unclear, for a time, whether there was a distinct routing between LRN 9 and LRN 26. This is illustrated in the 1944 map to the right.

Note: There are some additional details on the historical routing of LRN 43 in the discussion of US 99 in the San Bernardino area, extracted from a discussion by Scott Parker on AAroads.

In 1961, Chapter 1146 amended the definition to delete the reference to “"Crest Drive" into Bear Valley”.

From Route 30 in San Bernardino N, LRN 43 was signed as Route 18 (and encompassed all of the present day Route 18 between San Bernardino and Victorville, except for the portion around Big Bear Lake). The northern route around the lake was also LRN 43, and was originally Route 18 but is now Route 38.