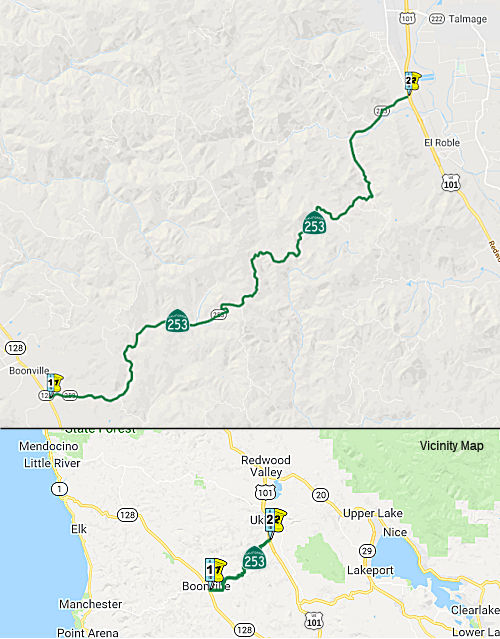 From Route 128 near Boonville to Route 101 near Ukiah.

This route was not part of the state highway system before 1963. This is "Ukiah-Boonville" Road.

In 1959, Chapter 1841 added the condition “Construction on either portion of [LRN 253] described in subdivisions (a) and (b) may be commenced when the City and County of San Francisco has acquired all rights of way necessary for the construction of such portion and has conveyed these rights of way to the State of California for highway purposes.”

In 1961, Chapter 1010 reworded the construction amendment: “Notwithstanding the provision of Section 89 of Chapter 1062 of the Statutes of 1959, construction of any or all portions of [LRN 253] may be commenced at any time, if the City and County of San Francisco has has conveyed or does convey to the State of California, without charge, all real property presently acquired by it for the construction of such route or portion thereof.”