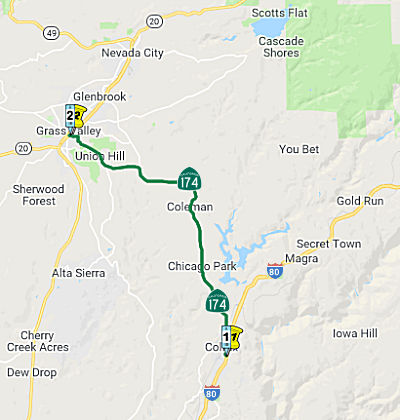 From Route 80 near Colfax to Route 20 near Grass Valley.

In 2020, Chapter 82 authorized the relinquishment to the City of Grass Valley the portion of Route 174 within its city limits. It renumbered the route definition as (a), and added the following clauses: 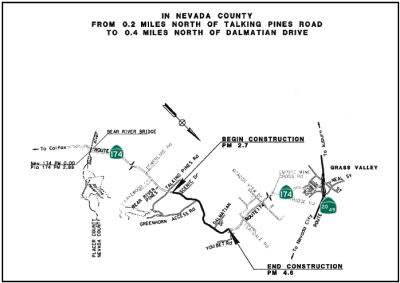 In September 2016, Caltrans published an Initial Study and Mitigated Negative Declaration regarding this project. The project proposes to improve safety along Route 174 in Nevada County from Maple Way to You Bet Road, post mile 2.74 to 4.63 by realigning and widening the highway and providing a clear recovery zone. The project is located approximately 5.7 miles southeast of Grass Valley. Caltrans notes that this 1.9 mile segment of roadway experienced a total of 30 collisions during the three year period from April 1, 2010 to March 31, 2013, and that the observed total accident rate is almost 1.65 times higher than the statewide average for a similar type facility and the observed fatal accident rate is 7 times higher than the statewide average for a similar type facility. They state that the proposed project will increase curve radii, widen shoulders, and improve the clear recovery area. This will provide several benefits to traveler safety. First and foremost, the increased curve radii will reduce the potential for a vehicle to lose control. The wider shoulders will not only provide more room for pedestrians and bicycles to travel the corridor, but they also provide room for an errant vehicle to regain control without leaving the roadway. The removal of fixed objects such as trees and embankments from the clear recovery area will reduce the severity of a run off road collision. Lastly, the improved curve radii, wider shoulders, and removal of fixed objects along with roadway will improve sight distances for roadway users, which will allow more time to identify and react to potential hazards along the highway. They only presented a single build alternative and a no-built alternative.
(Source: Nevada 174 Highway Realignment, Nevada County 03-NEV-174-PM: 2.7-4.6 Initial Study with a Mitigated Negative Declaration, September 2016)

In December 2016, the CTC approved for future consideration of funding a project that will realign the roadway, widen shoulders, and add a recovery zone on Route 174 near the city of Grass Valley (03-Nev-174, PM 2.7/4.6). The project is programmed in the 2016 State Highway Operation and Protection Program. The total programmed amount is $28,456,000 for capital and support. Construction is estimated to begin in Fiscal Year 2017-18. The scope, as described for the preferred alternative, is consistent with the project scope programmed by the Commission in the 2016 State Highway Operation and Protection Program.

In May 2017, it was reported that Caltrans had started to hold public meetings to present information for a project that proposes to improve safety along Route 174 in Nevada County from Maple Way to Your Bet Road. the project would include realigning curves, widening shoulders, adding a left-turn lane at Greenhorn Access Road and improving the Clear Recovery Zone (CRZ) on Route 174 from post mile 2.7 to post mile 4.6 in Nevada County. This project proposed to help reduce the number and severity of collisions within this segment of Route 174. This project is scheduled to go to construction during the summer of 2019.
(Source: Yubanet, 5/22/2017)

In June 2017, it was reported that Caltrans has completed initial environmental review and design processes for road improvements along the two miles of Route 174 between Maple Way and You Bet Road, which were revised after public input was provided at open house events in May 2015 and June 2016, and it plans to begin the process of acquiring any parcels or portions of parcels that will be impacted by the project this summer. Those improvements include realigning several curves and widening lanes— which currently range from 11 to 11.3 feet wide — to the state standard of 12 feet wide. Caltrans also plans to widen shoulders — which currently range from one inch to five and a half feet — to 8 feet, and add 20 feet of "clear recovery zone" beyond the lane on each side of the highway, which includes the eight foot shoulder and an additional 12 feet of area clear of any trees, poles, or other obstructions. Currently, Caltrans has identified 49 parcels that will be impacted, and will send out letters to the owners of those properties notifying them of the impact within the next few months. Construction is slated to begin during the summer of 2019 and be completed by the fall of 2020.
(Source: The Union, 6/9/2017)

In January 2019, there was a briefing at the CTC meeting from the Save Highway 174 group. The briefing was not included in the CTC minutes, but according to their website, the group "consists of affected property owners, residents and citizens of Nevada County who support reasonable safety improvements, but are concerned with the current design standard for the widening and realignment project proposed by Caltrans for a 1.9 mile portion of Route 174." A briefing on the site to the NCTC in September 2017 notes that the concern is over a 1.9mi segment of Route 174 from Maple Way to You Bet Road. It notes the highway will be leveled, straightened, and widened -- doubling to a minimum width of 64', including a 20' clear recovery zone. There would be additional right of way required approx. 120' to 150', and additional clearing to relocate electrical wires. There would be a total acquisition of over 14 acres from 53 parcels, and removal of over 1,700 conifers, oaks, and smaller trees. Their goals are to create a highway design standard and right-of-way width that is significantly less in scope but still preserves safety. In July 2017, the Nevada County Board of Supervisors wrote a letter to Caltrans, District 3 Director, requesting that Caltrans "reassess this project and its scope of work" and to "increase public outreach for input on the project and its design". They appear to have a large number of concerns about the EIR, believing it should not have been a mitigated EIR.
(Source: Save Highway 174 as of 4/7/2019)

In July 2020, it was reported that Caltrans was starting construction on Aug. 3 on a $27.1 million safety improvement project on Route 174 between Maple Way and You Bet Road in Nevada County. The project is realigning several curves, widening shoulders, adding a southbound left turn pocket at Greenhorn Access Road and improving the clear recovery zone, allowing errant vehicles to regain control. The project also upgrades pedestrian and bicycle facilities along a beautiful stretch of Sierra-area highway, continuing our commitment to multi-modal methods of transportation. DeSilva Gates Construction of Sacramento is the primary contractor for the project. Scheduled construction work for the 2020 season includes preparation for AT&T utility relocation, drainage improvements, tree removal, and roadway widening at various locations. This anticipated work will prepare the roadway for core project improvements planned for the 2021 construction season.
(Source: The Union, 7/28/2020)

This route is named the "Officer Bill C. Bean Jr. Memorial Highway". Officer Bean was a Sacramento Police officer who died on February 9, 1999 in the line of duty during a traffic stop in the Del Paso Heights of North Sacramento. Bean graduated from Colfax High School in 1989 where he later coached football. He started his career in law enforcement at the Placer County Sheriff's Department in May 1991 and later joined the Sacramento Police Department in April 1995. Officer Bean had served with the Sacramento Police Department for eight years at the time of his death. Bean was shot and killed as he and his partner attempted to stop a man wanted on an outstanding warrant. The suspect vehicle pulled over and started to drive again, leading the officers on a low-speed pursuit. The vehicle stopped after becoming disabled in the area of Knightlinger Street and South Avenue. As Officer Bean exited the patrol car and attempted to talk to the subject, the man opened fire, striking him several times. Bean had been wearing “body armor” but a bullet entered through an arm hole and hit him behind his left shoulder. Officer Bean's partner returned fire but did not strike the suspect, who was captured several hours later after a manhunt. The man was convicted of Officer Bean's murder and was subsequently sentenced to life in prison without parole on December 18th, 2003. Named by Assembly Concurrent Resolution 68, Chapter 110, on September 14, 1999.
(Image source: Flikr: Officer Down Memorial Page; Additional information: Calif Police Officers Memorial Foundation; ABC 10)

There is a business routing through the town of Colfax. It uses Auburn St., Grass Valley St., and Main St. The routing separates from Route 174 just north of the I-80 junction and rejoins the highway north of town.

[SHC 263.7] From the Bear River to the Grass Valley city limits.

In 1957, Chapter 36 deleted segment (b), and changed the origin of (a) to "[LRN 60] west of Inglewood via Manchester Avenue to [LRN 2] near Miraflores". Segment (b) ran from what is now the Western Medical Center, Santa Ana to Santa Ana and Main, and appears to have been obviated by other routes in the area.

The routing, as of 1963, ran from Route 1 W of Inglewood to US 101 near Santa Ana. This is (former) Route 42 (which itself is former Route 10), and corresponds to the present-day I-105. It ran along Manchester Avenue and Firestone Avenue. LRN 174 also included portions of US 101 between the junction with Route 42 and the junction with surface US 101 (LRN 2). Miraflores is approximately where Main Street meets N. Park Blvd in Santa Ana. As the freeway portion of the route was completed, this was also treated as LRN 2.

This was actually a significant route in its day, prompting numerous articles in California Highways and Public Works.