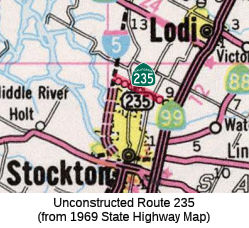 FromRoute 5 to Route 99 north of the Calaveras River in Stockton.

Tom Fearer notes: "The planned route of LRN 260 first appears on the 1960 State Highway City Insert and is shown north of Stockton intersecting Lower Sacramento Street and Thorton Street heading west from US 99/US 50/LRN 4 to LRN 238 (future I-5). When LRN 260 was initially designated it wasn't long before Signed County Sign Route J8 had been applied over Hammer Lane west from US 99/US 50 to Thorton Street in 1960. County Sign Route J8 continued northward onto a terminus in south Sacramento. At the time LRN 260 and County Sign Route J8 had been created Hammer Lane only existed west from US 99 to Thorton Street. By the 1964 State Highway Renumbering LRN 260 had been re-designated as part of the future Route 235."
(Source: Gribblenation Blog (Tom Fearer): Un-constructed California State Route 235)

This routing is unconstructed. The traversable route is Eight Mile Road according to one Caltrans document, but according to a Caltrans map, it may be Hammer lane J-8. The county is placing the road into a state of good repair. In 1983, San Joaquin County passed resolution R-83-1461 for procedures to be followed to include French Camp Road in the state highway system as Route 234 and Eight-Mile Road as Route 235. On November 29, 1993, San Joaquin County adopted Eight-Mile Road as an arterial highway and dropped interest in it as a state highway. Caltrans has no plans to assume maintenance of the traversable route. There is no schedule for Caltrans to assume maintenance.