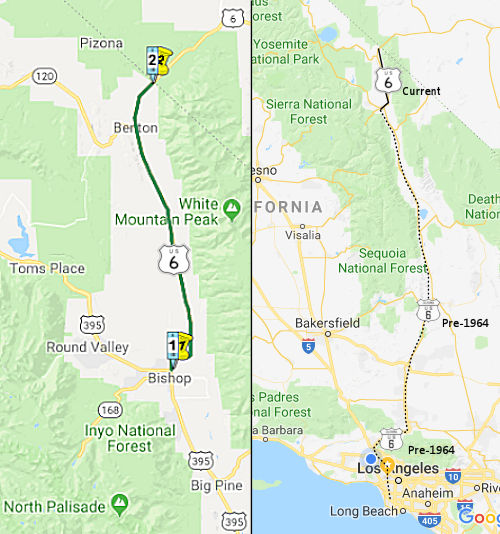 From Route 395 near Bishop to the Nevada state line near Montgomery Pass.

The definition of Route 6 is unchanged from the 1963 definition.

Before US 6 was truncated to end in Bishop, it consisted of the following segments:

Note: Some maps show US 6 running along US 101 and Lankershim Blvd (LRN 159) (as demonstrated by the map on Michael Ballard's site, showing US 6 along Lankershim, together with a short stub on the southern end of Route 170). However, it does not appear that there was any signage in the field along Lakershim. Construction on the extension of the Hollywood Freeway from the US 101/Route 134 North Hollywood interchange north to the Golden State (I-5) freeway in the Arleta district of the San Fernando Valley began in late 1962; under the old numbering system, US 6 was to be rerouted off I-5/US 99 south of Arleta and down the new freeway, and multiplexing SE from N. Hollywood with US 101 to the 4-Level Interchange in downtown L.A., and picking up US 66 in Hollywood for a "triplex" NW of the 4-Level. In fact, as the new "extension" was constructed, signage was placed for US 6 was briefly placed on the southern end of future Route 170. It was planned to temporarily route US 6 down Lankershim Blvd. (LRN 159, the existing route to be replaced by the new freeway extension) to US 101 in the interim while the rest of future Route 170 was constructed. The plans were to place that signage in late 1963; however, those plans were put on hold when it was decided in the spring of 1963 to renumber the entire system, effective 1/1/64. Under those plans, US 6 was going to be truncated back to Bishop under the new system, replacing signage for three or four months was deemed pointless. In fact, US 6 was truncated out of the City of Los Angeles when the first freeway segments of the Antelope Valley Freeway, future Route 14, opened. But plans, showing the planned signage on Lankershim were transmitted to the cartography departments of Gousha and McNally; and Gousha included that signage in their 1963 editions.
(Source: Scott Parker on AAroads, 11/24/2017; Michael Ballard, email and website, 7/16/2020))

It also appears that an alternative routing for US 6 was proposed at the time of its adoption in 1935. This alternative routing would have crossed Tioga Pass and continued to San Francisco. A June 1935 sketch map from the Division of Highways shows US 6 with two proposed alignments in California.  The first alignment shows US 6 entering California near via then Route 168 near Benton.  US 6 is shown terminating to the south at Long Beach by way of Owens Valley and Los Angeles.  The Benton-Long Beach proposed alignment of US 6 was a violation of the numbering conventions where even numbers denoted routes with a cardinal east/west orientation. An alternative proposed alignment of US 6 to San Francisco via Tioga Pass would have maintained the east/west orientation.  The Tioga Pass-San Francisco alignment of US 6 is shown entering California via Route 168 to Benton, encompassing all of Route 120 west to Manteca, US 99W/LRN 66 to Lathrop, US 50/LRN 5 over Altamont Pass to Hayward, LRN 105 from Hayward to the original 1929 San Mateo-Hayward Bridge, west over San Francisco Bay via the 1929 San Mateo-Hayward Bridge and north via multiplex of US 101/LRN 2 into downtown San Francisco.  The AASHTO Database does not provide an explanation as to why US 6 to San Francisco via Tioga Pass passed over in favor of the proposed extension to Long Beach.  Only the proposal to extend US 6 to Long Beach appears on the 1936 AASHO list of recommended additions to the US Route System. A letter dated February 8th, 1937 by the AASHO Executive Secretary to the State Highway Engineers of; Colorado, Nevada and California formally announced the approved extension of US 6 from Greeley, Colorado to Long Beach, California.  The Merced Chamber of Commerce subsequently requested the alternative route be added to US 6, requesting that the proposed US 6A depart from Yosemite National Park via Route 140 via the Yosemite-All Year Highway (completed between Mariposa and El Portal during July 1926) which would have it pass through the City of Merced.  The Merced Chamber of Commerce proposal cited a continuation of US 6A westward via Route 152 over Pacheco Pass and US 101 into San Francisco. The AASHO Executive Secretary noted in respond in October 1937 that alternate US Routes were no longer being considered by the AASHO Executive Committee, and the Merced Chamber of Commerce did not pursue the matter further (however, AASHTO did go on to designate alternative US routes, notably US 101A in California).
(Source: Gribblenation Blog (Tom Fearer), “Paper Highways; US Route 6 to San Francisco via Tioga Pass”, 11/2021)

In 1934, State Signed Route 6 was defined to run from Santa Monica to Jct. Route 39 near Fullerton. This routing was similar to that of what was later Route 26 (also LRN 173), so it is likely that once US 6 was established, Route 6 was renumbered as Route 26, and then 1934 Route 26 was dropped from the state highway system. This routing was along Pico Blvd E from signed Route 3 (Lincoln) [later signed US 101A (LRN 60), now Route 1], N on Robertson to Olympic, E on Olympic to Crenshaw, N on Crenshaw, E on 10th Street and 9th Street, then E on Mines Ave near Huntington Park, then SE along Anaheim-Telegraph Road to Santa Fe Springs, then SE along Los Nietos Road, S on Valley View, SE on La Mirada Road to Route 39. This routing appears to have disappeared by 1939 and for much of it, there is not a parallel legislative route.

Prior to the definition and signage of US 6, the portion of the route from Bishop to the California-Nevada state line was signed as part of state signed Route 168 along LRN 76. This was an eastern extension of Route 168 from its present-day terminus in Bishop. LRN 76 in its entirety was defined in 1931 and largely followed the path of the Carson & Colorado Railway east of Bishop over the 7,100 foot Montgomery Pass to the Nevada State Line. Route 168 east of the Sierras was cut back to US 395/US 6 in Bishop when the latter was extended into California in 1937. Route 168 would not be extended again until 1964 when it was routed east of US 395 to Oasis at Route 266.

In June 2017, Michael Ballard reported that one of the bridges used by former US 6 (Sierra Highway) that crossed the Santa Clara River near Solemint, California, may be replaced in the near future. The bridge, constructed in 1938, is one of the oldest remaining in the Santa Clarita area and is the longest span on former US 6 in California. The bridge has remained almost intact from its original construction. The only changes have been minor to the bridge itself. The highway, however, has changed quite a bit. In 1968, Sierra Highway, then Route 14, was widened to four lanes. A second bridge for northbound traffic was added, with the original bridge being used for southbound traffic. The bridges were essentially bypassed when Route 14 was moved to the freeway alignment later. Presently, Sierra Highway is six lanes wide at the river crossing. As the bridges were built with a four-lane highway in mind, only a narrow shoulder along both directions exists. This condition is one of the reasons the bridges across the Santa Clara River are being replaced. Michael has a nice photo essay on his site (from which this text was stolen, with this credit, of course).

In October 2017, the CTC approved for future consideration of funding a project that proposes to widen shoulders and add rumble strips on US 6, near Bishop in Inyo and Mono counties (09-Iny-6, PM 4.3/8.4, 09-Mno-6, PM 0.0/0.8). This project is fully funded and programmed in the 2016 SHOPP for $6.2 million which includes Construction (capital and support) and Right-of-Way (capital and support). Construction is estimated to begin in Fiscal Year 2017-18. The scope, as described for the preferred alternative, is consistent with the project scope programmed by the Commission in the 2016 SHOPP.
(Source: October 2017 CTC Agenda Item 2.2c.(1)) 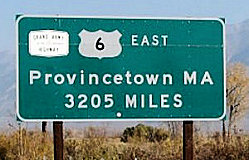 In 1937, it was proposed that US 6, from Provincetown MA to Los Angeles CA be designed the Grand Army of the Republic Highway. In 1943, the California Department of Transportation adopted the name Grand Army of the Republic Highway for US 6. According to CalTrans in March 1994, the Grand Army route is now US 6, then US 395 to Route 14, Route 14 to I-5, I-5 to I-110, and then south to San Pedro. A monument marking the western terminus of the Grand Army Highway may be found on the wall on the S side of Ocean Avenue, in front of the Terrace Theatre. It was named by Assembly Concurrent Resolution 33, Chapter 73, in 1943.
(Image Source: Clamshack on Flikr)

One map from 1938 shows US 6 as being named the "Roosevelt" Highway.

ACR 26 requested the Department of Transportation, upon application by an interested local agency or private entity, to identify any section of former U.S. Highway Route 6 that is still a publicly maintained highway and that is of interest to the applicant, and to designate that section as Historic U.S. Highway Route 6. Chaptered July 3, 2007. Resolution Chapter 67.

[SHC 253.1] Entire route. Added to the Freeway and Expressway system in 1959. Note that although the route is legislatively designated as freeway, it is not constructed to freeway standards (i.e., there are grade crossings).

The routing that would become LRN 6 was defined in the 1909 First Highway Bonds, running from Sacramento to Woodland Junction. It was extended in 1933 to run from [LRN 8] near Napa to Winters via Wooden Valley and Berryessa Valley. By 1935, the routing had been codified as being:

Only the first segment was considered a primary route.

Signage on the route was as follows: