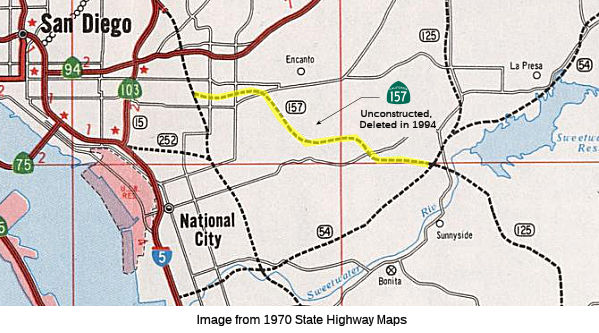 In 1994, the routing (from Route 805 near Ocean View Boulevard near San Diego, through the Paradise Hills to Route 125 near Sweetwater Reservoir) was deleted per AB 3132, Chapter 1220. The route was added to the state highway system in 1959. A routing was adopted in 1962, but it was rescinded locally by SANDAG (San Diego Association of Governments, the regional planning agency) in 1974, and deleted from the state highway system 20 years later. The right-of-way purchased for the eastern portion of the route was sold in the mid-1970s. Together with Route 252 (the Southcrest or El Toyon Freeway) and I-5, the route would have provided direct access from East San Diego County to downtown.

This route would have been named the San Miguel Freeway.