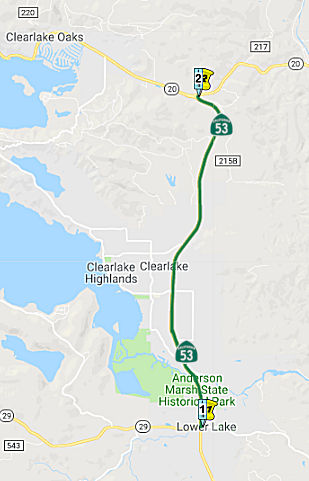 From Route 29 to Route 20 via Clearlake.

This was LRN 49. added to the state system in 1919. Portions were part of LRN 50, added in 1915 as a new route between Rumsey following the meanderings of Cache Creek to Lower Lake. . The original signage (if any) is unclear, as Route 53 was not part of the set of state signed routes announced in 1934. Portions of this routing became Route 29 after 1964, specifically the portion between Middletown and Lower Lake.

In 1933, the definition of LRN 49 was extended south to Napa, LRN 50 was also extended eastward to Woodland.  By 1938, Route 53 was being signed on the state highway maps between Route 20/LRN 15 south to Route 29/LRN 49 in Middletown, entirely aligned on LRN 49. However, between Route 20/LRN 15 south to Lower Lake the original alignment of Route 53 was substantially different than the current routing, using the following alignment:
(Source: Gribblenation Blog (Tom Fearer), "California State Route 53")

"According to old-hand Division of Highways lore, the Rumsey-Lower Lake route following Cache Creek was a 1930's-era concept intended to extend Signed Route 16 all the way to US 101 via what was to, after 1964, become Route 29 from Lower Lake to Lakeport and then LRN 16 (now the NW end of Route 175) west from there.  But because of the potential for flooding, the eastern section was deleted from the plans and Signed Route 16 simply shunted up to Signed Route 20 as it is today.  The Route 29/Route 53 arrangement, with the former occupying LRN 89 and the latter the continuation of LRN 49 was deployed back then as well; it wasn't until the LRN 243 E-W route along the south side of Clear Lake was built in the early '60's that the current arrangement, which took the Route 29 through/truck route off the narrow and windy Route 175 alignment via Cobb, was formalized with the 1964 statewide renumbering."

As of February 2000, the Route 20 corridor is a hot spot. Mendocino, Lake, and Colusa Counties have all agreed that they would like to see 4 lane road all along the corridor, which is considered a rural principal arterial. In Lake County, rather than upgrading Route 20 along the North shore of the lake, the principal arterials will be Route 29 and Route 53 along the South side of the lake. Project Study Reports in progress for the following:

In July 2006, the CTC considered Resolution No. R-3636, relinquishing right of way near PM LAK 1.2/1.5, in the City of Clear Lake, between Cache Creek and Old Highway 53, consisting of reconstructed and relocated city streets, frontage roads and cul-de-sacs.

In November 2019, Caltrans reported that the roundabout at the Route 20 / Route 53 intersection in Lake County was opening to traffic. The roundabout is expected to reduce the total number of collisions by 28% and collisions with injuries are projected to drop 74%.
(Source: Caltrans District 1 Tweet, 11/5/2019)

The portion of this route from Lower Lake to Route 20 was named the "Yolo and Lake Highway" by Resolution Chapter 283 in 1915.

The route that would become LRN 53 was first defined in the 1919 Third Bond Act as running from Rio Vista to Fairfield. In 1921, Chapter 831 extended the route by adding "The improved county road extending from the town of Rio Vista in the county of Solano to the city of Lodi in the county of San Joaquin, crossing the Sacramento River at Rio Vista, thence crossing Brannan, Andrus, and Tyler Islands to the San Joaquin Cty Line between Tyler and Staten Island to the mainland in San Joaquin County on to the improved county highway, thence through Thornton in an general easternly and southernly direction to Lodi." This was codified in 1935 into the state highway code as:

"Fairfield to [LRN 4] near Lodi via Rio Vista"