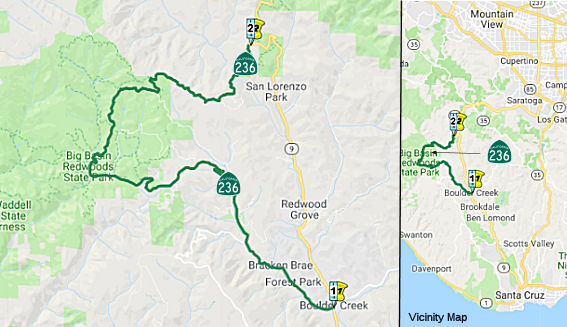 From Route 9 near Boulder Creek to Route 9 near Waterman Gap via Governor's Camp in Big Basin Redwoods State Park.

In 1963, this route was defined as “Route 9 near Boulder Creek to Route 9 near Waterman Gap via Governor's Camp in Big Basin Redwood State Park.”

In 1955, Chapter 1789 defined LRN 236 as “…a point northwest of the City of Santa Barbara on [LRN 2] to the campus of the University of California at Santa Barbara, Goleta Campus. The commission shall allocate from the State Highway Fund the necessary funds for the construction of said route. The allocation of money provided for in this section shall be made out of moneys contained in the State Highway Fund available for construction of state highways in County Group No. 2, but which is not subject to Section 188.4; and expenditures from such allocation shall be credited against the expenditures required to be made pursuant to Section 188.4 in Santa Barbara County until June 30, 1963. This route shall be a memorial to the late Senator Clarence C. Ward of Santa Barbara County and shall hereafter be known as Clarence Ward Memorial Boulevard.”

This is present-day Route 217.