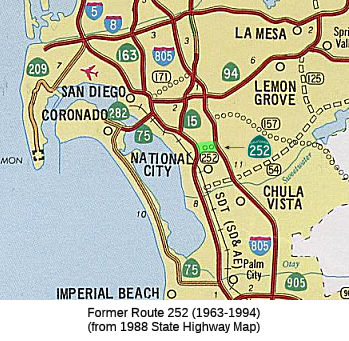 In 1965, the CTC adopted a freeway alignment for Route 252 in its entirety in San Diego and National City. This 1.8-mile connecting link between I-5 and I-805 freeways proceeds easterly from I-5 at Wabash Boulevard (Route 103), approximately one block north of Beta Street, to 43rd Street
in San Diego. It then turns southeasterly to the adopted route for the future I-805 at Division Street in National City.

This was supposed to act as the north end of an I-5 bypass around National City and Chula Vista, utilizing I-805. According to Andy Field, the huge flyover and approach ramps at the I-805 43rd Street exit are the beginnings of this planned freeway, which was killed locally in 1980. A redevelopment project later resulted in a grocery store (Northgate Market Plaza, as of 2020) at the terminus of the off-ramp. Behind this shopping area lies abandoned right-of-way that not been developed. Overgrown with weeds, this swath of land clearly shows the path Route 252 would have taken across the Southcrest community to meet I-5. These ramps were built around 1974-75, long before the rest of the California 252 project would have been started. These ramps still show up as part of Route 252 in the CalTrans Photologs in 2001. Several widened bridges and ramps at the I-15/Route 15 junction clearly show that future expansion for the Route 252 connection was envisioned.

In 1947, Chapter 1449 extended the definition of LRN 252 to include “the highway from San Leandro to Oakland via Alameda and the Posey Tube”, noting that this segment “is part of [LRN 252]”. However, the problem was that LRN 252 did not exist at the time. In 1949, Chapter 1422 repealed the erroneous section, and created the route as an extension of LRN 226.