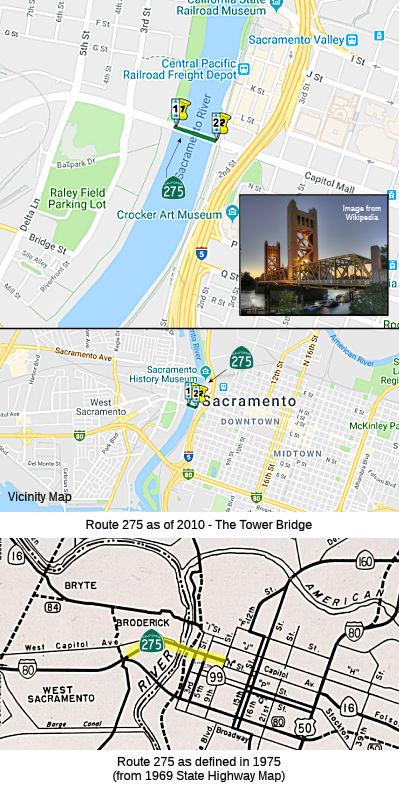 In 1967, Chapter 1350 defined Route 275 as “Route 80 near West Acres Road west of Sacramento to the junction of Capitol Avenue and Ninth Street in Sacramento. No funds in the State Highway Fund shall be used for the construction or maintenance of any further aesthetic improvements on that portion of the route in the City of Sacramento.” This routing of Route 275 was planned as a realignment of Capitol Avenue. When I-80 was built, the old route was removed from the state highway system, except for Route 275, which the legislature specifically asked the highway department to keep until they could decide whether this would be permanent (1966 Senate Concurrent Resolution 17, chapter 94, p. 872).

In 1996, Chapter 1154 deleted the route. According to the maps from District 3, it is not yet decomissioned.

In December 2003, after much of the route was deleted from the system, CalTrans construction signage at the corner of 3rd Street and West Capitol Avenue advised motorists to "Use SR 275" due to road work on West Capitol Avenue. It is likely that, although unsigned, the route has not yet been relinquished. The Tower Bridge is part of the riverfront revitalization in that area, and will likely be getting significantly wider sidewalks. The goal is to have promenades and trails lining both sides of the river, from Lighthouse Marina to Stone Lock in West Sacramento; from Discovery Park to Miller Park in Sacramento. There would be a deck over I-5 on the Sacramento side to reconnect the city to the riverfront.

According to Chris Sampang, the portion of Route 275 that was part of the West Sacramento Freeway (from US 50/Route 84 east to the Tower Bridge near Raley Field) was reliniquished in 2001, five years after decomissioning, in order to convert several interchanges (3rd Street/West Capitol Avenue, 5th Street/West Capitol Avenue) into intersections. No work has begun on this however. The route, however, remained in the state highway code post-decomissioning (explaining why the lone Caltrans sign on West Capitol near Raley's Supermarkets headquarters mentions the highway). The Capitol (Avenue) Mall portion of Route 275 (from the I-5 overpass east to 9th Street, where US 99W, Route 16, and US 40 used to turn right to hit up N Street) was relinquished in 1999 to the city of Sacramento, and the only signs of former state maintenace are the old gantries for Route 99/Route 70/Route 16 and I-5 present in the area. There are plans for 5th Street to be extended S across the Route 275 West Sacramento Freeway as part of future improvements (and development in the Triangle area, the space between South River Road, Route 275, and US 50 where Raley Field is located). This will likely come with the downgrading of access control for the old freeway.

According to the Sacramento Bee, construction on the downgrading of former Route 275 will likely begin in 2005 with the removal of the Riske Lane interchange (Riske Lane will be renamed Garden Street afterwards); the money used for this project will be from local development funds. The removal of the interchanges at 3rd Street/South River Road and 5th Street will occur in 2008, after the old railroad line at the South River Road exit is removed. This will provide for more access to the Triangle/Raley Field area.

In July 2006, West Sacramento initiated the Tower Street Gateway project. This relates to the two-mile stretch of former Route 275 running through West Sacramento, dividing three neighborhoods and making it a challenge to get around town. The city plans to turn former Route 275 (which acts as a freeway on-ramp connecting Route 50 and Tower Bridge) into an arterial boulevard with three traffic lights. In early August 2006, the city advertised for bids to construct the first phase of the project, involving tearing down the Riske Lane freeway overpass and installing a signal. Construction is expected to begin in Fall 2006. The city believes that by transforming the old highway into a boulevard the city will become more accessible to residents and visitors who might otherwise drive quickly past it.. Route 275 divided three neighborhoods -- Washington, the Triangle, and West Capitol Avenue and the downtown -- from one another. All three areas are in the midst of "aggressive urban revitalization. Work to better link the neighborhoods will begin at Riske Lane. That road will become Garden Street and ultimately link West Capitol Avenue to a future network of streets south of the Tower Bridge Gateway. About half the cost of the first phase of the project, or $3 million, will be paid for by a Community Design Program grant from the region's transportation planning agency, the Sacramento Area Council of Governments. The balance will be paid with redevelopment agency money and some federal funds. The project's second, and final, phase calls for stoplights on the Tower Bridge Gateway at the intersections of 3rd and 5th streets. Third Street goes under the gateway and, like Riske Lane, plans call for making that an intersection, too. The second phase is contingent upon funding.

According to Chris Sampang, as of January 2011, construction work has begun on the reconstruction of the Tower Bridge Gateway (former West Sacramento Freeway) - the old overpass crossing 3rd Street near Raley Field has now been demolished.

In July 2010, the CTC approved for future consideration of funding a project that would convert the Tower Bridge Gateway (formerly Route 275) from a freeway to a city street from the Union Pacific Railroad (UPRR) Underpass to the Tower Bridge, a length of 1,700 feet. The project will remove the Third Street Undercrossing and will provide new, at-grade, signalized intersections at Fifth Street and Third Street. Impacts and mitigation measures related to areas of earth, air quality, water resources, plant life, animal life, noise, light and glare, land use, hazards, circulation, public services, energy, utilities, human health, and aesthetics were implemented by the City. The project is estimated to cost $8,789,000 and is programmed with SLPP ($1,000,000) and Local ($7,789,000) funds. Construction is estimated to begin in fiscal year 2009/10. On June 10, 2010, the City confirmed that the project scope in the MND as modified by the addendum is consistent with the project scope programmed by the Commission.

According to Joe Rouse, the bridge itself will remain owned and operated by Caltrans. Before Route 275 was re-created in 2010, the notion was that as legislatively Route 275 wouldn't exist anymore, the bridge may not carry a route number (which would make it an anomaly in the system once the relinquishment of the highway on either side is complete). It is unclear if the bridge is currently signed.

In July 2014, it was reported that Caltrans was looking again to give away the Tower Bridge. As of July 2014, Sacramento owned the portion of Capitol Mall that leads to the bridge on the east, and West Sacramento owned the portion of the Tower Bridge Gateway that leads to the bridge on the west. The state only owned the 737-foot bridge. Giving up the bridge was actually Caltrans' idea. The organization sent letters to both cities making the offer, citing permit red tape. Caltrans is offering to complete an $8.5 million restoration project on the bridge fenders and maintain it for five years after the cities take control. Sacramento will vote on a memorandum of understanding to continue negotiations in late July 2014, while West Sacramento isn't close to anything formal yet. An agreement would have be reached between both cities to operate and maintain the bridge. The earliest local jurisdictions would take control of the bridge is 2018, and local funds wouldn't be needed until at least 2023. Annual operating and maintenance costs are about $400,000.
(Source: ABC News 10, 7/22/14)

In March 2016, the CTC approved for future consideration of funding a project in Yolo County that will remove and replace the fender system surrounding Pier 6 and Pier 7 of the Tower Bridge on Route 275 between the cities of West Sacramento and Sacramento. The project is programmed in the 2014 State Highway Operation and Protection Program. The total estimated cost is $10,821,000 for capital and support. Construction is estimated to begin in Fiscal Year 2017-18. A copy of the MND has been provided to Commission staff. The project will result in less than significant impacts to the environment after mitigation. The following resource areas may be impacted by the project: biological resources, cultural resources, hazardous materials, and water quality. Avoidance and minimization measures will reduce any potential effects on the environment. These measures include, but are not limited to, the use of sound attenuation devises, environmental awareness training for all construction personnel, new fender replacements matched with the design and appearance of the old fenders, appropriate BMPs for water pollution prevention, and the implementation of an approved Water Pollution Control Program. As a result, an MND was completed for this project.

In October 2018, it was reported that a $6 million project has started on the Tower Bridge. The 82 year old is sagging: Bridge inspectors last year noticed the cables that help lift the main span for tall ships have stretched 14 inches longer than they once were – a sign that time, weather, and stress have taken a toll. A project has started to replace the cables. The project, which includes a handful of other upgrades, continues through December 2018 and is requiring daily traffic-lane reductions and several full-bridge nighttime closures. The work focuses on cutting and replacing, one at a time, 96 steel cables that connect the lift deck to two 1 million-pound counterweight blocks that are suspended high inside each of the span’s twin towers. Those counter-weight blocks slowly lower, via a second cable system, as the bridge deck rises, providing a weight balancing role. The state could have let the cables remain as is, but took action partly because officials feared potential deterioration inside the nearly 2-inch-thick cables. The project work includes redoing electrical cables and lights, and upgrading security and communications systems. The bridge is owned by Caltrans and sits on Route 275, the shortest highway in California, running from one end of the bridge to the other. The state relinquished the rest of that highway more than a decade ago to West Sacramento on one side and Sacramento on the other.
(Source: Sacramento Bee, 10/29/2018)

In the Summer 2019 issue of Mile Marker, it was reported that Caltrans is also planning repairs to the Tower Bridge, opened in 1935. In addition to the earlier work, an emergency contract is awaiting approval to replace the main mechanical drive system, electrical control system, add back-up controls, and replace worn bearings and balance chains. Caltrans expects to spend another $5 million overall on the Tower rehabilitation effort. The Tower Bridge is a verticle lift bridge (one of three in the system) that sees 16,500 vehicle trips daily (on average).
(Source: Summer 2019 Mile Marker)

The portion of former Route 275 that extends from the end of the Sacramento River Bridge in the City of Sacramento to the junction of Capitol Avenue and Ninth Street in Sacramento is officially named the "Capitol Mall". Named by California Government Code §8167. (March 1977)

The freeway (formerly the easternmost segment of the West Sacramento Freeway) has officially been renamed the "Tower Bridge Gateway" although no signs exist yet to this effect. It was probably renamed by local ordinance.

According to research done by Chris Sampang, the name "Capitol Avenue" was first used on October 26, 1940. Previously, the street was "M Street".

Bridge 22-0021, over the Sacramento River between Sacramento and Yolo counties, was called the "Tower Bridge". It was built in 1934. In 2002, a public input campaign was conducted to determine what color to repaint the bridge. The candidate colors were gold, green, and burgundy. More than 42,000 Sacramento residents chose the color gold, and the painting will be completed in 2003.

This routing was never signed. It is constructed to freeway standards from Route 50 to the Tower Bridge.