From Route 79 near Aguanga to Route 74 east of Anza.

With respect to the transfer of Route 71 to Route 79 from County Sign Route R3 to Temecula and the creation of Route 371, Scott Parker on AARoads noted: The adoption of Route 79 along Winchester Road threw the area's highway network into chaos -- and this was before I-15 (and I-215) were even on the scene. The Division of Highways had recently brought the connector from Route 79 near Aguanga northeast to Route 74 (i.e., originally part of Route 71, now Route 371) into the state system as a "shortcut" from the San Diego area to Coachella Valley cities. Without it, Route 71 would have simply been truncated to end at Murietta, north of Temecula (at the site of the present 15/215 split) -- but D8 chose to multiplex Route 71 and Route 79 together for about 20 miles total to Aguanga, where Route 71 struck out over the new route NE to Route 74 (which was a bit awkward, as Route 71 and Route 74 then intersected one another twice, at Elsinore and near Anza). This arrangement lasted all of 8 years; after it was decided to route I-15 down Route 71 from Corona south to Temecula. So, in 1974, D8 simply truncated Route 71 at the (then) US 395 junction in Murietta, leaving Route 79 as the sole occupant of the Temecula-Aguanga route; the Anza connector was redesignated as Route 371. This happened at the same time as the commissioning of Route 330 due to the reroute of CA 30 away from the San Bernardino mountains and over to Redlands -- so a 300-series number wasn't an isolated case. Of course, when I-15 was completed south of Corona, Route71 was cut back to its Corona-Pomona section, and US 395 was cut back to I-15 at Hesperia, with, first, I-15E and after 1982 I-215 taking over its routing. But today that relatively short (about 3 mile) section of I-15 multiplexed with CA 79 in Temecula is one of the most congested locations in the Inland Empire; and both adjacent sections of CA 79 itself -- relinquished or not -- are the two most heavily developed commercial "strips" in the area.
(Source: Scott Parker on AARoads, "Re: CA 79", 10/30/2019) 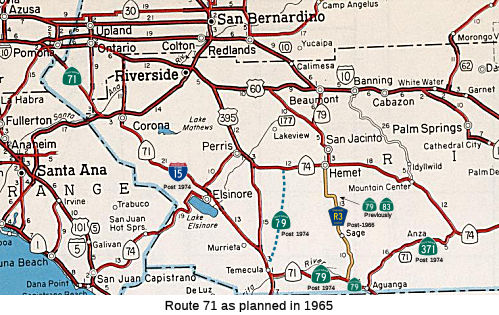 It appears that instead of building a new alignment for LRN 277 (as planned in the 1960 state highway map), the Division of Highways opted to assume maintenance of Cahuilla Road and Kenworthy-Bautista Road. LRN 277 can be seen aligned over Cahuilla Road and Kenworthy-Bautista Road on the 1962 Division of Highways State Map.
(Source: Gribblenation Blog "California State Route 371")

The intersection of Route 371 and Route 79 (RIV R56.517) has demonstrated itself to be a high source of accidents, with four deaths occuring in the period from July 2001 to July 2002. As a result, the intersection is being redesigned. Two-lane Route 79 is the main link between Temecula and the Warner Springs and Santa Ysabel areas of San Diego County. Two-lane Route 371 is a well-traveled back road between Southwest County and Palm Springs. Currently, the two roads converge in Aguanga where an oddly configured intersection contributes greatly to the accident count. Westbound traffic on Route 79 must stop at the intersection, while eastbound traffic on Route 79 and traffic coming down a steep curvy grade from Anza on Route 371 proceed without stopping. Beginning in Summer 2003, work started to reconfigure the intersection to force drivers heading toward Temecula to stop and turn either left of right at a "T" intersection with Route 371. Turning left would take them quickly back to Route 79. Long-term improvements will include a merger lane from Route 371 to Route 79. As of April 2008, construction had been completed: It is now a standard T intersection with 3-way stop signs. Traffic leaving Route 371 is forced to turn, while travellers on Route 79 can proceed straight through. Most of Route 371 has been newly repaved as well. Most of the mile markers on Route 371 are very weathered (similar to the section of Route 74 between Route 371 and Route 111) but are marked with mileage between PM 57 (at the south end) and PM 78 (at the north end).

In July 2016, it was reported that Caltrans began construction on a left turn lane project on a section of Route 371, in the section of roadway along Route 371 two-tenths of one mile west of Bahrman Road and just west of Bailiff Road in the unincorporated community of Anza. The $520,000 project, which was awarded to All American Asphalt, is expected to end by the beginning of September 2016. All American Asphalt will begin clearing and grubbing on July 11, 2016 and is expected to continue until July 15. During clearing and grubbing, Caltrans workers focus on the preservation of public and private property and pay special attention to environmentally sensitive areas. The project will be constructing left turn lanes for both directions of travel on Route 371 and also be digging to allow access for underground utilities.
(Source: Anza Valley Outlook, 7/8/2016)

In October 2016, it was reported that Caltrans had resumed work to complete the Route 371 Left Turn Lane Project at Bahram Road that will include additional highway work requested by Anza residents in an Anza Valley Municipal Advisory Council meeting in July. The project scope had been altered to accommodate the extension of a two-way continuous left turn lane from the center of Anza to the intersections at Bahram rather than the originally planned left turn lanes at Bahram. Requests from the Anza community at a recent Municipal Advisory Council meeting led Caltrans to change the lane configuration based on the access needs of community and local businesses. The changes being requested by Anza residents required an additional $160,000 to be added to the original $520,000 project. The planning change by Caltrans was the second in the community with the first being a plan to cut some of the historic trees along Route 371 in the main village area. Plans were changed on the residents’ requests and updated engineering reports. The work was scheduled for completion at the end of 2016.
(Source: Anza Valley Outlook, 10/9/2016)

In May 2020, the CTC approved for future consideration of funding the Bridge Replacement and Bridge Rail Upgrade project (08-Riv-74, PM 13.2, 33.9; 08-Riv-79, PM 9.3; 08-Riv-371, PM 65.4), which will replace one bridge and make improvements to other bridges in Riverside County. (PPNO 3002C). The project is located in the City of Lake Elsinore on Route 74, among other locations, in Riverside County. The Department plans to widen Leach Canyon Bridge on Route 74 to provide standard shoulder width and upgrade the bridge rail, as well as make improvements to other bridges. The purpose of the project is to improve the safety of the traveling public by upgrading bridge rails to meet current crash and safety standards. This project is fully funded and currently programmed in the 2018 SHOPP for a total of $12,880,000 which includes Construction (capital and support) and Right of Way (capital and support). The total estimated project cost is $14 million. Construction is estimated to begin fiscal year 2020-2021. The scope, as described for the preferred alternative, is consistent with the project scope programmed by the Commission in the 2018 SHOPP.
(Source: May 2020 CTC Agenda, Agenda Item 2.2c.(1))

In March 2021, it was reported that construction was beginning on the Leach Canyon Channel Bridge on Route 74 and Cahuilla Creek Bridge on Route 371. The $13 million expansions, which are being handled by Irvine-based Ortiz Enterprises Inc., are scheduled to start on March 15, 2021. Traffic lights will be installed at the Leach Canyon Bridge, on the north side of Lake Elsinore at Route 74 and Lincoln Street, as part of the initial stage of the project. Additionally, traffic signals are also due for installation in preparation for widening of the Cahuilla Creek Bridge along Route 371, near Cahuilla Road, just north of the Cahuilla Indian Reservation. Both expansion projects are slated for completion in early 2024.
(Source: Lake Elsinore Patch, 3/5/2021)

In January 2017, it was reported that Caltrans had announced it will constructing rumble strips on the existing shoulder and centerline of Route 371 in Anza from Wilson Valley Road to Cary Road (~ RIV R56.517 to RIV 67.845) and from Kirby Road to Route 371/Route 74 (~ RIV 72.813 to RIV 76.958) starting in 2018. Rumble strips on highways are designed to let motorists know when they are drifting out or into the opposing lane or into the shoulder. “Caltrans is currently in the Preliminary Engineering phase, and we are developing the Environmental Document and the Project Report,” said a news release sent by Elaheh Hadipour, PE, Caltrans project manager. “The project is currently programmed to start construction in late 2018.”
(Source: Anza Valley Outlook, 1/26/2017)

In April 2017, Caltrans issued a bulletin noting that, starting May 14, 2018, they will be making safety improvements near Cahuilla in two locations on Route 371 between Route 74 and Route 79 to place centerline and shoulder rumble strips and install enhanced visibility 6-inch striping. The first location is from Wilson Valley Road to Cary Road (post mile 60.2 to post mile 67.7) and the second area is from Kirby Road to Route 74 (post mile 72.8 to 77.1.) The estimated $756 thousand project, awarded to Jabre Contracting Inc., is anticipated to last less than thirty working days.
(Source: Caltrans Commuter Alert 4/23/2018)