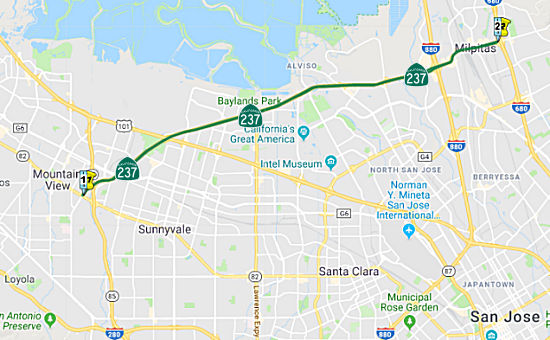 From Route 82 near Mountain View to Route 680 in Milpitas.

This was originally part of Route 9. It was LRN 113, defined in 1933. Before the current bridge over the Guadalupe River was constructed, it took a route into Alviso via Gold Street north and 1st Street southwest back to current Route 237. 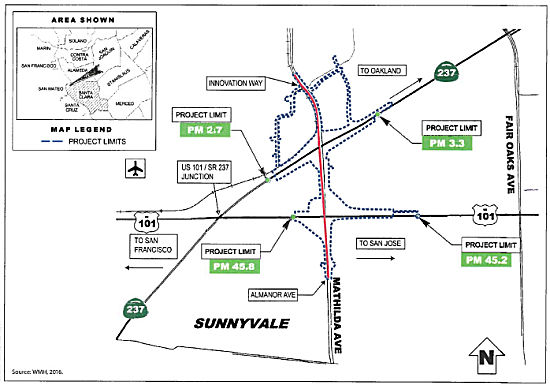 In August 2018, it was reported that the VTA will approve the final pieces of a funding package in September 2018 to begin construction of a new $48 million interchange for the Mathilda Monster at US 101 and Route 237. Work could begin by late December 2018, and, if all goes well, be done by the end of 2019. This includes widening Mathilda to three lanes, new stop lights and better ramps. Design is complete, however there is a $17 million deficit with the delay in Measure B funding. That half-cent sales tax is hung up in a lawsuit.
(Source: Mercury News, 8/14/2018)

In August 2018, the CTC approved for future consideration of funding the following project for which a Final Environmental Impact Report (FEIR) has been completed: Route 237 and US 101 in Santa Clara County (04-SCl-237, PM 2.7/3.3, 04-SCl-101, PM 45.2/45.8). Construct roadway improvements on a portion of Route 237 and US 101 in the city of Sunnyvale. (PPNO 0462H) This project proposes to improve Mathilda Avenue in the city of Sunnyvale in Santa Clara County, from the Almanor Avenue/Ahwanee Avenue Interchange to Innovation Way. The project proposes to improve the on and off ramps at the Route 237/Mathilda Avenue and US 101/Mathilda Avenue Interchanges. Also proposed in the project are new retaining walls, reconstruction of sound walls, signalization of intersections, new left-turn lanes, modifications to bicycle and pedestrian facilities, storm water treatment facilities, street lighting, ramp metering, signage and light rail crossing facilities. The proposed project is estimated to cost in total approximately $42 million. Funding sources are anticipated to be from various local funds. The project is estimated to begin construction in 2018. Additionally, the August CTC meeting approved an allocation of $17,000,000 for the locally-administered Senate Bill 1 (SB 1) Local Partnership Program (LPP) (Competitive) Mathilda Avenue Improvements at Route 237 and US 101 project (PPNO 0462H), in Santa Clara County.
(Source: August 2018 CTC Agenda Item 2.2c.(11), Agenda Item 2.5s.(2)) 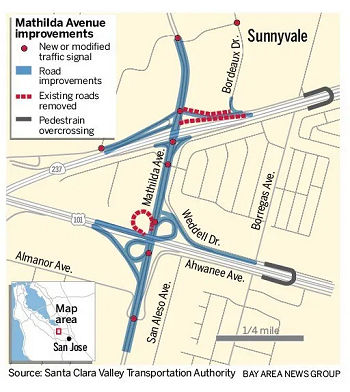 In August 2019, it was reported that Moffett Park Drive between Mathilda and Bordeaux was closing permanently in preparation for the realigning of the westbound Route 237 off-ramp onto Mathilda. Motorists, cyclists, and pedestrians will still be able to travel along Moffett Park east of Bordeaux and west of Mathilda. As an alternative to using Moffett to exit, motorists were directed to Innovation Way, which has been signalized to better accommodate higher traffic volumes. Work on the westbound Route 237 off-ramp onto Mathilda will commence with the closure of Moffett Park Drive. The realignment of the off-ramp eliminates the short spacing of signals along Mathilda just north of the Route 237 overcrossing and will help improve traffic flow by easing backups and lessening delays. Completion of the ramp realignment is expected in Fall 2019. Construction on the entire project is expected to be complete in Summer 2020.
(Source: Mercury News $$$, 8/1/2019) 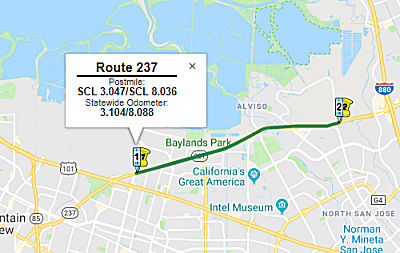 In January 2012, it was reported there are plans to convert the HOV lanes on Route 237 to HOT (Toll) Lanes. This change means the lanes will have fixed entry and exit points. They will remain free to carpoolers, those on motorcycles, and those with exemption stickers; other drivers can use Fasttrak transponders. The conversion will take place on 2/27/2012, and costs $11.8 million. The toll is anticipated to range between 30¢ and $3.00. These lanes opened at the end of March 2012.

In March 2015, it was reported that the Valley Transportation Authority (VTA) was finalizing its plan to add HOT lanes on Route 237 from Mathilda Avenue in Sunnyvale (237 SCL 3.047) to North First Street (237 SCL 6.898) in San Jose. Phase 2 of the plan, which is set to be completed in late 2016, deals particularly with the extension of express lanes on Route 237, but it is part of a bigger project called Silicon Valley Express Lanes Program that deals with express lane extensions on US-101, Route 85 and Route 237. These lanes are extensions of the current express lanes that run from I-880 north and south from Milpitas to Route 237, and along Route 237 from I-880 interchange to Lawrence Expressway heading west and beginning at North First Street going east. Total project cost is $21 million. About 36% of funding for Phase 2 will come from tax revenues, and the other 64% comes largely from federal grants. Phase 3 of the project will span multiple corridors and will entail adding direct connectors and "flyovers" for Route 85 and US-101 in South San Jose and Route 85 and US-101 in Mountain View. The entire Silicon Valley Express Lanes Program is set to be completed in 2035.
(Source: San Jose Mercury-News, 3/13/2015)

In June 2015, it was reported that Caltrans and the Valley Transportation Authority were changing the striping into the express lane on WB Route 237 between North First Street (apx 237 SCL 6.898) and Zanker Road (apx 237 SCL 8.036). About 4,100 feet of double solid white stripes will be replaced by dashed striping, which indicates new entry and exit points and allows carpoolers earlier access into the express lane. And it will allow commuters to exit the express lane at the North First offramp, which has been prohibited by the double solid white stripe. The Route 237 express lane ends near Lawrence Expressway. This design will be evaluated for 6 months before it will be made permanent.
(Source: San Jose Mercury News, 6/23/2015)

In September 2018, it was reported that the VTA has begun the next phase of work to convert the carpool lanes on Route 237 into Express Lanes from Zanker Road in San Jose to Mathilda Avenue in Sunnyvale. As on I-580 in the Livermore Valley and I-680 in Contra Costa County, hours will run from 5 a.m. to 8 p.m. and most drivers will need FasTrak. These will likely be the rules on I-880 from Oakland to Milpitas, and on US 101 from Route 85 in Mountain View to I-380 on the Peninsula. Those with three or more people in a vehicle will ride free of charge. Those carrying just two people may also have to pay but will likely get a 50 percent discount off the toll. The express lanes will take a year to complete.
(Source: Mercury News, 9/26/2018)

In November 2019, it was reported that the second phase of the Silicon Valley Express Lanes on Route 237 was rolling out, when carpool lanes convert to express lanes, but the new rules may leave some commuters baffled. Express lanes, which will be extended west on Route 237 to Mathilda Avenue in Sunnyvale, are the most significant change governing Bay Area roadways in almost 50 years when carpool lanes and metering lights first sprouted. The first phase of Route 237 express lanes opened in 2012 near Dixon Landing Road and include the I-880/Route 237 connector. With the new lanes, all express lanes users must have a FasTrak transponder, and the lanes will run from 5 a.m. to 8 p.m. weekdays. Electric car owners will no longer ride free in a carpool lane. They will also pay a toll to use the express lane but will get a 50 percent discount. The CHP will use cameras to catch cheaters with fines going to the VTA instead of the state. Drivers will be able to merge into the toll lanes at almost all locations on Route 237, rather than only at specific entrance and access points, which is the case on I-680 express lanes in the Fremont area.
(Source: Mercury News, 11/14/2019)

[CTC February 2002 Agenda Item 2.3c]. The following segments of the original routing may have been relinquished: PM R5.6 to PM R5.8 in the City of San Jose.

In October 2017, the CTC added the following project into the SHOPP: 04-SCl-237 7.0/8.0: On Route 237 in Santa Clara County: In San Jose, in the westbound direction from Zanker Road to North First Street. Construct auxiliary lane.

In November 2006 and February 2008, the CTC considered relinquishment of segments in San Jose, consisting of reconstructed and relocated city streets. The February 2008 relinquishement was near Zanker Road. (apx 237 SCL 8.036))

At one time, there were plans to build this a freeway from I-880 to I-680 (~ SCL 9.494 to SCL 11.012). However, this now seems unlikely, and a study is being conducted in 2002 to explore upgrading Route 262 instead. According to a posting by Joe Rouse on m.t.r, the planned freeway alignment tied in with the existing alignment west of I-880, crossing I-880 at Dixon Landing Road, and ending at I-680 just south of Scott Creek Road. There are two bridges on I-680 just south of Scott Creek where the ramps would have passed underneath that might have been part of the plan. The problem with this hypothetical routing (it is unclear if it ever went beyond the "on paper" level) was that it would go through a big chunk of the South Bay National Wildlife Refuge. Daniel T. reported on m.t.r that the 1967 and 1969 Gousha maps of San Jose both show the proposed routing, and this routing matches the 1967 Regal Map of San Jose, which actually shows interchange designs. According to the map routings, the I-680 to I-880 connector left the current Route 237 alignment just east of Lafayette Street. It then went NE to Zanker Road, with a standard diamond interchange. It then turned NNE, having a modified cloverleaf interchange with the Nimitz Freeway (EB 237/NB Nimitz and WB 237/SB Nimitz were to be flyovers). Dixon Landing would have been rerouted to loop around the southern end of this interchange. Route 237 would then cross the Alameda/Santa Clara County line, have a half interchange at Oakland Road (straight ramps for EB 237/SB Oakland, loop ramps for NB Oakland/WB 237). The last interchange, 237/680, would be a trumpet, with EB 237/NB 680 flying over and NB 680/WB 237 flying under (at Scott Creek Road, hence the Caltrans Bridge Log entry).

In December 2016, it was reported that long-range plans call for converting Calavaras Blvd (Route 237, 237 SCL 9.504) in Milpitas to six lanes. In 2009 the city adopted a traffic impact fee on all new developments to help fund the widening of Calaveras over the UPRR tracks. But there is still a huge funding gap, and nothing is imminent. Fomer Milpitas Mayor Bob Livengood said in 1993 that “unless something really strange happens, what Calaveras looks like today is what Calaveras will look like for many years to come.”
(Source: Mercury News, 12/8/2016)

There are plans to connect direct HOV connectors between Route 237 and Tasman Drive. July 2002 CTC Agenda.

The portion of this route constructed to freeway standards is named the "Southbay Freeway".

Bridge 37-0470, the South Alviso Overhead bridge in the City of San Jose (SCL R006.10), is officially designated the "Warren West Memorial Bridge". It was built in 1993, and was named by Assembly Concurrent Resolution No. 59, Chapter 105, in the same year. Warren West was driving piles to support the South Alviso Overhead when he suffered a fatal heart attack on January 22, 1993.

In 1956 (ex. sess.), Chapter 63 defined LRN 237 as “Junipero Serra Boulevard as it exists and as it was constructed by Joint Highway District No. 10 from its junction with [LRN 56] in Daly City to the present terminus of said highway in the City of San Bruno. Upon the effective date of this section, the Joint Highway District No. 10 shall be dissolved in accordance with the provisions of Chapter 20 of Part 1 of Division 16 of the Streets and Highway Code and all property, assets, and liabilities of said district shall become the property of the State.”

This is a close approximation of the current route of I-280, but was really the original 1964 routing of Route 117. The Route 117 designation may be predated the I-280 designation.