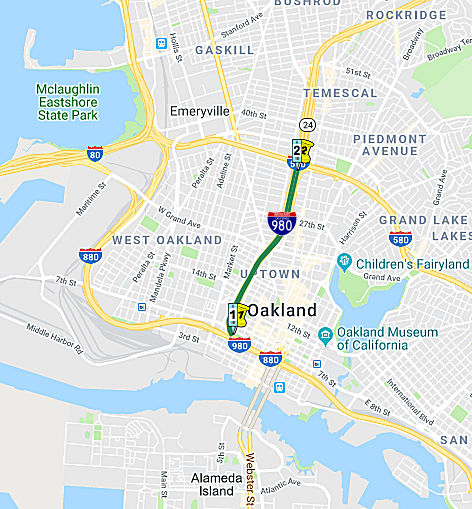 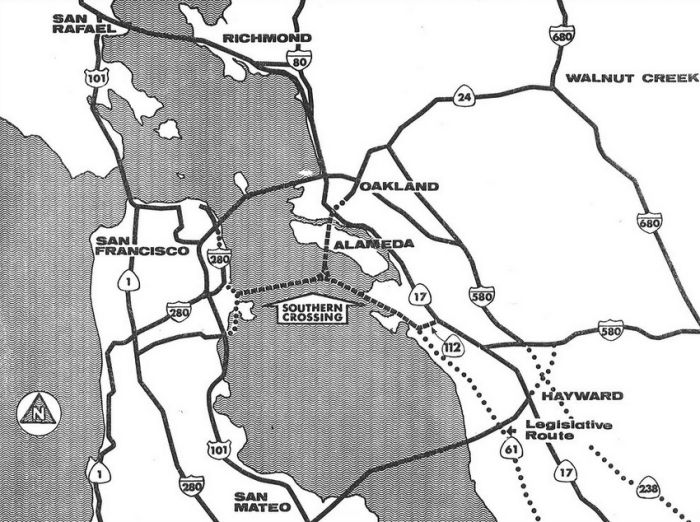 Chris Sampang speculated that this might have originally been a possible connector to the Southern Crossing. This is confirmed by the map to the right (click on the map for a larger image). The map, from The Southern Crossing: A Brief Report (more photos on the photostream) shows Route 980 continuing south to connect with the I-280/I-380 Southern Crossing.

There are two aspects to the freeway: The connection through Oakland proper (between I-580 and I-880), and the potential connection to a bridge connecting the East Bay to San Francisco.

With respect to the bridge aspects, the impetus for the freeway first emerged in 1927, when engineers identified a number of routes for a possible bridge connecting the East Bay to San Francisco, according to Connect Oakland, a group that formed in 2014 to advocate for the freeway’s removal. Although planners ultimately chose the current alignment, which knits West Oakland to Yerba Buena Island and San Francisco, planners began considering a second crossing almost as soon as the Bay Bridge opened. By 1948, municipal leaders were mulling a second transbay crossing connecting Castro and Grove streets in Oakland with Army Street in San Francisco. The idea was to build a connection from the Grove-Shafter Freeway, known today as Route 24, with a new bridge. That bridge never materialized.

As for the crossing in Oakland: there is a connection to a historic use of freeways to divide and segregate communities. The Federal Housing Administration, created in 1934, insured mortgages covering eighty percent of the cost of a house — but only in all-white neighborhoods. They judged as risky -- and used a practice known as red-lining -- for properties in racially mixed neighborhoods or even in white neighborhoods near black ones that might possibly integrate in the future. An FHA underwriting manual notes that highways were “effective in protecting a neighborhood and the locations within it from … inharmonious racial groups.” Miami, Los Angeles, and other big cities routed freeways to cordon off, or pave over, minority neighborhoods. The double-decker Cypress Freeway plowed through the middle of West Oakland in the 1950s, and another freeway was planned (but not constructed) that would mark a firm line between white Oakland, and black West Oakland — I-980. But by the time construction started in the 1960s, things were starting to change. The Civil Rights Movement was gaining traction, the courts were ruling that segregation could no longer be government policy, and the Black Panther Party was rising up in West Oakland. The freeway would no longer divide white and black residents because black people had already moved into the rest of Oakland at that point. Construction started in 1962, and soon bulldozers began clearing a path through Oakland. Demolition crews knocked down houses, setting off protests, but there wasn’t much activists could do. However, in 1972, a young lawyer named Stephen Berzon, funded by President Johnson’s Legal Services Program, came up with an idea for a lawsuit. It wasn’t enough to relocate people, he argued; the California Department of Transportation also needed to replace the housing it tore down. A federal judge agreed with Berzon and gave him the injunction he sought, stopping the earth movers. The project sat in limbo for years, with the construction site acting as a parking lot for heavy equipment. People from the neighborhood told Berzon they didn’t necessarily want to stop the freeway, they just wanted decent homes. A freeway would be better than what the earth movers left behind.  In 1973, Roger Clay Jr., a young attorney living in West Oakland, began working with Berzon. Berzon worked to make sure that the government built new housing and honored the city’s promises to keep his clients’ rents low. This led to the community shaping the design of the freeway, and is why the freeway was constructed as an depressed roadway instead of elevated. That way, it wouldn’t form as much of a barrier and so that the earthen sidewalls would contain some of the noise and pollution. It is also why the first two miles are elevated (pre-1972 construction), and the end is elevated (to connect with I-880).
(Source: SF Streetsblog, 4/17/2019)

In the end, Oakland removed 503 homes, 22 businesses, four churches and 155 trees to make way for a speedier connection to downtown, according to Connect Oakland.

In November 2015, a community movement surfaces that wants to remove I-980. The argument is that I-980 is the lowest traffic segment of urban freeway in Oakland, and the most valuable land (whether from a community or commercial perspective) taken up by a freeway. Removing it will reunite historic West and downtown Oakland. The cause is being chapioned by "Connect Oakland" and John King, the urban design critic of the SF Chronicle. According to King, the plan would replace the freeway with "a boulevard lined with housing at all price levels, reknitting the urban landscape." The proposal could also "include space for BART beneath the boulevard, a tunnel that could connect to a second BART tube from Oakland to San Francisco." King describes Octavia Boulevard in San Francisco, for example, as a comparable example for the future direction of Connect Oakland. The proposal has been pressed "for the past year by a handful of local architects and planners with good intentions but little clout," reports King, but city recently moved the idea into a new level of legitimacy when it requested "requested $5.2 million from the Alameda County Transportation Authority to begin planning studies of an I-980 conversion and a second BART tube."
(Sources: Planetzen, 11/17/2015; Neighborland; SF Chronicle, 11/14/2015 (paywalled))

In January 2017, it was reported that the Congress for the New Urbanism had released a report highlighting I-980 on its “top 10” list of urban freeways across the country that they say serve as a blight to the communities they bisect. The call echoes those of local advocacy groups, as well as the city of Oakland, which is studying the freeway’s conversion to a boulevard as part of its $2.35 million downtown specific plan. The plan will create guidelines for future development in the heart of the city. Completed in 1985, the roughly two-mile stretch of freeway runs from its intersection with Interstate 880 near Jack London Square to its nexus with Highway 24 near the I-580 interchange, blanketing more than 40 city blocks. As in many communities across the country, the construction of urban freeways devastated West Oakland, severing neighborhoods, isolating communities and plunging the neighborhood into several decades of decline. But some social justice advocates have mixed views about whether removing the freeway now would heal the economic wounds of decades past. As of 2017, the highway is underutilized, reaching only 41.9 percent capacity at its peak, with average levels much lower, according to a UC Berkeley study of the corridor. Connect Oakland, along with the city of Oakland, proposes removing the freeway to its intersection with Grand Avenue, where traffic volumes peak at just over 27 percent of the roadway’s intended capacity. The freeway carries no freight traffic and does little to augment the regional freeway network. Transforming the freeway into a boulevard could net the city 17 new acres of publicly-controlled land, creating a dozen connections between West Oakland and downtown where there are currently five. Removing the freeway would remove a barrier to Jack London Square, better connecting that neighborhood with both downtown and West Oakland, said Chris Sensenig, the founder of Connect Oakland. City officials also see the corridor as a possible route for a second transbay tube crossing for BART, Caltrain and high-speed rail, Sensenig said. The below-grade route could be built at the same time the freeway is converted into a boulevard, or, because that project is likely decades away, it could create a space underground for the transit lines, when and if that project comes to fruition. BART included funds in its $3.5 billion bond measure, which voters approved in November 2016, for a possible study of a second transbay tube, an idea that has germinated in regional transportation circles for decades.
(Source: Mercury News, 1/30/2017)

However, the community is not completely on-board with removal of I-980. The historical argument for getting rid of it assumes the freeway is a legacy of mid-century attempts to build barriers around white middle-class neighborhoods, or as a wrecking ball to replace “urban blight.” That’s true of several major freeways, but the story of I-980 isn’t so clear cut. By the time the state of California finally finished building it in 1985, the residents of West Oakland had come on board. At that point, the community wanted this freeway. Today, some of those same residents find themselves wary of another major public works project in their backyard. And that means activists’ best intentions are colliding with a community that might prefer to be left alone. In West Oakland, reactions ranged from skepticism to outright scorn. To comprehend why old timers from this historically black neighborhood are so dubious, you have to understand two seemingly conflicting things: that West Oakland has been repeatedly screwed over by infrastructure projects and that the history of I-980 freeway deviates from that pattern. Some of the people who initially balk at the idea of tearing up the freeway become more interested after they consider what could replace it. Over the past few years, Oakland’s city government has been holding meetings on the future of the 980 corridor to capture what residents want. Residents have turned up at the meetings with lots of ideas for better uses of the land, like bus lanes, parks, and affordable housing. Some see the response as an encouraging sign: People in the community may embrace the idea of replacing the freeway, if they get to choose what comes next.
(Source: SF Streetsblog, 4/17/2019)

Route 980 from Route 880 to 17th Street in Oakland is named the "John B. Williams Freeway". John B. Williams (1917 – October 13, 1976) was a city planner for Oakland in the 1960s and 1970s. He was head of the Oakland Redevelopment Agency and Oakland's Office of Community Development from 1964 to 1976. Mr. Williams was responsible for the redevelopment of Oakland's downtown business district, including the creation of the City Center project. The plaza connecting City Center with the 12th Street BART station is named for him. Mr. Williams died of cancer on October 13, 1976, at the age of 59.  Named by Assembly Concurrent Resolution 52, Chapter 61 in 1977.
(Image source: East Bay Yesterday)

I-980 is also known as the "Grove-Shafter Freeway". This name comes from the streets that the freeway paralleled between the Nimitz Freeway (I-880) and the Warren Freeway (Route 13). In the 1980s, Grove Street was renamed Martin Luther King, Jr. Way. Shafter Street runs from MacArthur Boulevard to the Rockridge BART station.

Approved as 139(a) non-chargeable interstate in July 1976; Freeway.