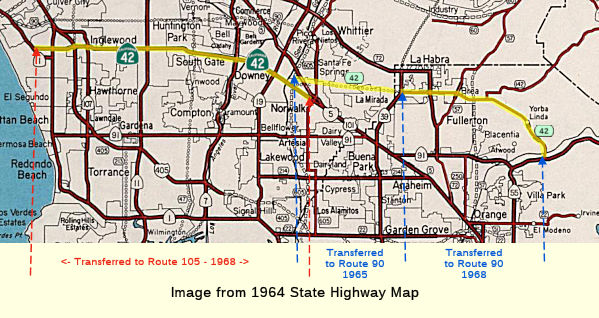 In 1963, this route was defined as "Route 1 west of Inglewood to Route 91 in Santa Ana Canyon via the vicinity of Norwalk."

On June 5,1963, a public hearing was held regarding the Century Freeway (then Route 42) from the Pacific Coast Freeway (Route 1) to the Santa Ana Freeway (I-5).

In 1966, the state highway map shows the surface routing along Manchester and Firestone, but a proposed freeway routing along the future I-105 (Century Freeway) route.

On August 21, 1933, it was reported that Firestone Boulevard, sometimes known as Manchester Avenue, was widened from 40 feet to 74 feet and became part of the California state highway system. The article noted that the road will be one of the principal traffic arteries connecting the Coast Highway, the southerly portion of Los Angeles, and contiguous territory with Anaheim, Orange, and Santa Ana.
(Source: This Date in Los Angeles Transportation History, August 21)

On April 30, 1937, the last section of Manchester Blvd in Anaheim was dedicated for public use. CHPW described the route as “This route extends easterly from [LRN 60, Route 1] in Los Angeles County at Playa del Rey, through the cities of Inglewood, Los Angeles and South Gate, thence southeasterly in a direct line through the communities of Downey, Norwalk and Buena Park, and through the southwesterly corner of the city of Anaheim, connecting with [LRN 2, US 101] in Orange County at Miraflores, and makes a total distance of 33.01 miles”. The accompanying map shows the last sections being between Market and Hillcrest in Inglewood (1935), Compton to Santa Fe (1934), and a large section from perhaps near Downey Ave to near Anaheim Blvd (then, Los Angeles Avenue, US 101) and Katella (1935-1937). This replaced an old routing that ran from Firestone to Woodruff to Imperial Hwy to Studebaker to Foster to Norwalk to Rosecrans to Stage Road to Grand/Stanton (Route 39, now Beach Blvd) to Lincoln Ave to Anaheim (routing is approximate, attempting to track an old map). The CHPW articles notes “The plan to project this Manchester Avenue route from the Roosevelt Highway (US 101A), near Playa del Rey, to connect with Coast Highway [LRN] 2 (US 101), near Santa Ana, became a unified program of the State in 1933. when this proposed route became a part of the State Highway System as [LRN 174]. At that time portions of the road had been laid as city streets, but with no connecting links. Then the only portion of this road improved to full width pavement was 5.9 miles within the cit.y of Los Angeles. Since January 9, 1934, when construction was started by the State on the first contract, work has progressed steadily. With the cooperation of the cities and counties, rights of way have been secured, widening and new construction completed on 27.1 miles of highway, the completed roadway pavement surface varying in widths from thirty feet to seventy-six feet.” The map above is hard to follow as roads have changed names. Cerritos Ave appears to have been renamed Lakewood Blvd, making Sumerset closer to Bellflower. The split in Buena Park appears to be where Stage (veering to the left) splits from Beach (note that Beach was previously Grand and Stanton)
(Source: This Date in Los Angeles Transportation History, April 30)

In 1950, work was in progress to convert the US 101 Alternate (formerly Bypass) on LRN 174/Manchester Boulevard Extension into a segment of the Santa Ana Freeway.  The construction zone began at Rosecrans Avenue 11.4 miles southeast to Miraflores near Santa Ana.  The work was divided into three project zones. By 1952, the Santa Ana Freeway was either contracted or completed from downtown Los Angeles to Route 19/Rosemead Boulevard and from the southern outskirts of Norwalk southeast via LRN 174 to Los Angeles Street in Anaheim.  The Santa Ana Freeway was anticipated to be completed between the Los Angeles Civic Center and Route 19/Rosemead Boulevard by late 1952/early 1953.   By 1954, the Santa Ana Freeway via LRN 166 extended from Anaheim-Telegraph Road designated as mainline US 101. US 101 bypassed downtown Norwalk, connecting with the existing Santa Ana Freeway project zone on Firestone Boulevard/LRN 174.  The interim alignment of US 101 entered Norwalk via Pioneer Boulevard southward to Firestone Boulevard/LRN 174.  Route 10 was extended easterly on Firestone Boulevard/LRN 174 from Route 19/Rosemead Boulevard to meet the new alignment US 101.  By 1955, Route 10 was extended through downtown Norwalk via Firestone Boulevard, Bloomfield Avenue and Rosecrans Boulevard to US 101/Santa Ana Freeway.  In 1960, Route 10 was renumbered to Route 42 to avoid duplication with the new I-10.  Route 42 first appears on the 1961 Division of Highways Map.
(Source: Gribblenation Blog (Tom Fearer), "Former California State Route 42 and Former California State Route 10", December 2021)

The CalTrans bridge log indicates that Route 105 is signed in its entirety as Route 42. What this means is that the currently signed Route 42 is really the old traversable routing of Route 105. In mid-2000, CalTrans finally relinquished all portions of Route 42, although it still has some of the old signs in some places. The CalTrans photolog still shows some portions of Route 42 as unrelinquished in 2001.

The route that became LRN 42 was first defined in 1913 by Chapter 398, which called for "the survey and construction of a state highway from the point known as Saratoga Gap on the line between the counties of Santa Clara and Santa Cruz, extending thence by the practicable route in a generally SW-ly direction along the ridge between the San Lorenzo and Pescadero creeks to the present boundary of the California State Redwoods Park, thence into the California State Redwoods Park in Santa Cruz County to Governor's Camp, and thence through said park to the boundary thereof at Bloom's Mill."

[LRN 5] near Los Gatos to Governor's Camp in California Redwood Park via Saratoga Gap and along the ridge between San Lorenzo and Pescadero Creeks.

This definition remained until the 1963 renumbering. The route is the present-day Route 236 between Governor's Camp near Big Basin and the Route 9/Route 269 junction, and then Route 9 to Route 17 (former LRN 5). The California Redwood State Park Road ("from Saratoga Gap, on the line between the counties of Santa Clara and Santa Cruz, to, into and within California Redwood Park...") was defined in 1913. The remainder of the route (to Route 17 near Los Gatos) was defined in 1933. The Route 9 signage dates back to 1934.