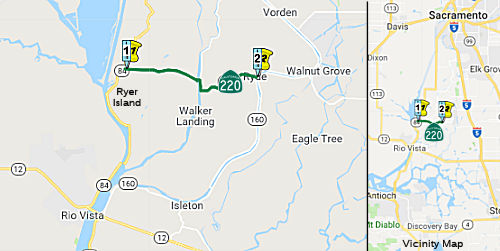 There is confirmation of signs at the junction with Route 160, both on Route 220 itself and on Route 160. The route includes the J-Mack Ferry at Steamboat Slough (which is unsigned, unlike the Route 84 Ferry). The J-Mack is a cable ferry; i.e. it runs along a cable just under the water's surface.

In February 2009, the J-Mack was taken out of service briefly for repair and reconstruction. The J-Mack, built in 1969, runs on an inch-thick steel cable draped through Steamboat Slough between Ryer Island in Solano County and Grand Island in Sacramento County. Powered by two diesel engines, the ferry uses a mechanical system that grabs the cable and pulls the ferry back and forth. The J-Mack doesn't need replacing, but it needs some mechanical work and is in desperate need of a new paint job. Normally the ferries run round the clock, stopping only for twice-daily 20-minute lunch breaks, when river conditions make it unsafe to operate, or when something breaks down and needs fixing, which has been happening often. It appears that it was taken out of service again in in late January 2010.

At the end of September 2019, it was reported that the Route 220 J-Mack Ferry is out of service due to federally mandated Coast Guard inspections. It will be back in service near the end of November 2019.
(Source: CBS Sacramento, 9/30/2019)

In December 2019, it was reported that the J-Mack Ferry has returned to service, and its sister ferry, the Real McCoy on Route 84, could return to service as early as the end of January 2020. The J-Mack Ferry on Highway 220 was taken out of service in September for repairs and Coast Guard inspections. But as soon as it came back into service, the J-Mack went out again. The ferry has developed mechanical problems which are currently being diagnosed.
(Source: Daily Republic, 12/13/2019, Patch 12/17/2019))