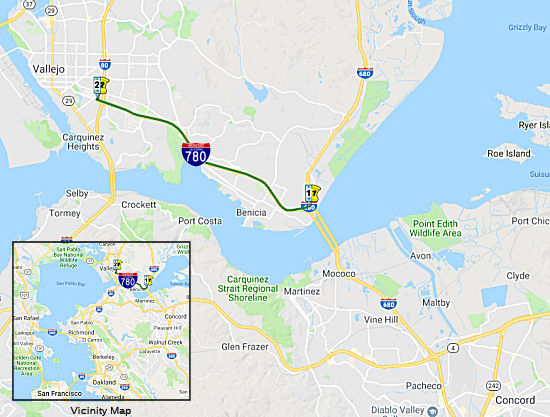 This was part of LRN 74 (defined in 1935). Some sources show this signed as Route 29, but that does not show on the state highway maps. It appears to have been an unsigned state route.

The original routing of LRN 74 between Route 21 in Benicia west to US 40 was on Benicia Road from starting from 2nd Street. By the 1964 Highway renumbering the freeway grade replacement of Benicia Road was completed and the route was assigned as part of I-680.
(Source: Gribblenation Blog (Tom Fearer): Interstate 780 and path of California State Route 141, 2/22/2019) 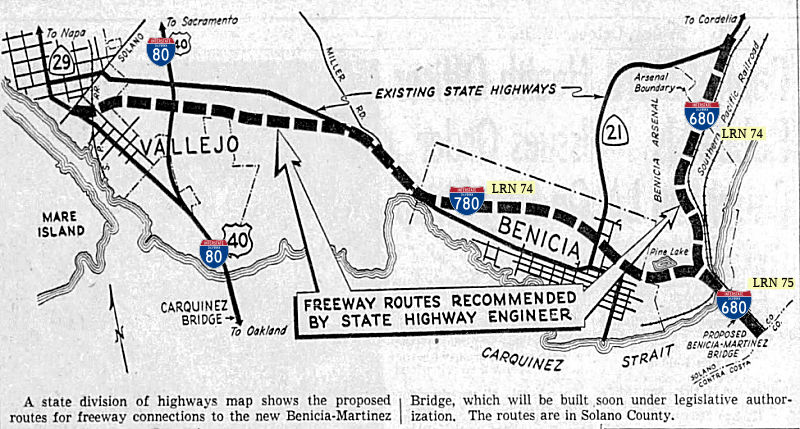 In October 1955, the Sacramento Bee published a proposed routing for what would become I-780, noting (edited to correct OCR errors):
(Source: Joel Windmiller, California's Historic Highways on FB, 6/2/2020)

State Considers Benicia-Vallejo Freeways. The state highway department is considering the adoption of freeway routings in the vicinity of Vallejo and Benicia in Solano County to provide connections to the proposed Benicia- Martinez Bridge and to US 40 near the Carquinez Bridge. State Highway Engineer G T McCoy yesterday recommended these routes: [LRN 74] (Benicia Road) between Vallejo and the proposed Benicia-Martinez Bridge [future I-780] is a route generally parallel to the existing highway [LRN 74], which might have been signed as Route 29] but slightly' to the south near Vallejo and to the north in the Benicia area. State Route 21 [future I-680] to the east of the existing highway rejoining it north of the Benicia Arsenal north boundary. Possible Hearing. The Solano supervisors and the Vallejo and Benicia City Councils will be asked if they believe a public hearing is necessary before the commission officially adopts the routes. McCoy said the route in the vicinity of Vallejo would be a relocation planned as an integral part of the proposed Carquinez parallel bridge project, and should be constructed at the same time that US 40 through Vallejo is converted to a full freeway. With regard to State Route 21 [I-680], McCoy said that with construction of the proposed Benicia-Martinez Bridge, it would become a part of the main north-south route connecting San Jose through Walnut Creek to US 40 west of Fairfield. Route Extension. In that connection, H J Walt, Benicia city administrator and Sol O Rose, Benicia city councilman, appeared at the commission meeting to request extension of the State Route 21 plan to provide a water level throughway from Benicia to Fairfield before Joining US 40 "We feel we have been fenced in long enough" said Walt "and such a route would offer al seven mile shortcut to the new bridge". Rose said 75 per cent of the citizens and property owners of' Benicia are opposed to any route that would bisect the city. The estimated cost of the LRN 74 improvement is! $6,600,000 and the Route' 21 improvement $3,000,000. Start' of construction would depend upon the availability of highway funds.

Note: I-780 is one of five routes in California with "backward" post-miles -- that is, they run from East to West, as opposed to West to East. This is due to the postmiles being an artifact of the transfer from Route 680, which is a S/N route.

In December 2017, the CTC authorized relinquishment of a Park and Ride Lot facility in the city of Vallejo (04-Sol-780-PM 7.4), county of Solano, and within the jurisdiction of Solano County Transit (Soltrans), to Soltrans. The facility is located at the terminus of Route 780 and along Curtola Parkway. Soltrans, by Park and Ride Lot Relinquishment Agreement dated October 2, 2017, agreed to waive the 90-day notice requirement and accept title upon relinquishment by the State.

The interchange of I-80 and I-780 in the City of Vallejo in the County of Solano (~ 80 SOL 2.105/SOL 2.416; 780 SOL 7.071/SOL 7.429) is named the “Congressional Gold Medal Memorial Interchange”. It was named to honor the fact that the City of Vallejo is the home of the former Mare Island Naval Shipyard and has a large concentration of veterans who have served honorably in the Armed Forces of the United States. Many of these service members are being honored by the United States government for their actions in various theaters of war and conflict, as well as for their distinguished peacetime achievements. The Congressional Gold Medal is the United States Congress’ highest expression of national appreciation for distinguished achievements and contributions that may be awarded to recognize individuals, groups, or institutions. The interchange specifically honors all the Congressional Gold Medal recipients from General George Washington to the African American “Hidden Figures” NASA mathematicians and engineers, and various other warriors, including the Native American Code Talkers, Tuskegee Airmen, Women Airforce Service Pilots of World War II, Japanese American 100th Infantry Battalion and 442nd Regimental Combat Team, Montford Point Marines, Hispanic 65th Infantry Regiment, Filipino veterans of World War II, and the Chinese American veterans of World War II. Named by Senate Resolution SCR 111, Res. Chapter 179, 09/13/22.