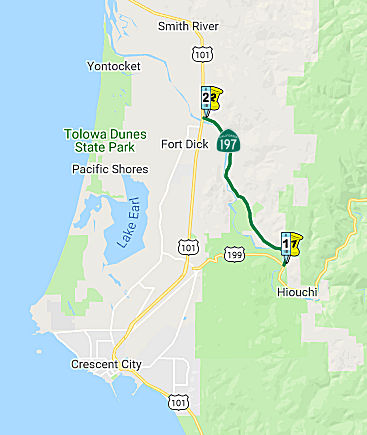 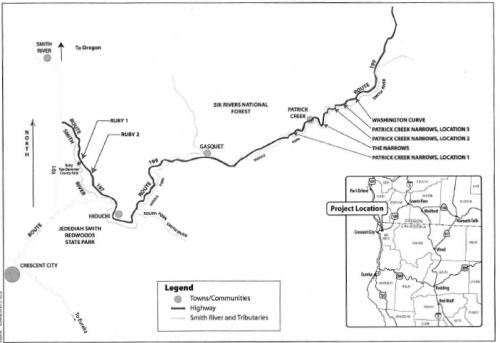 In June 2013, the CTC accepted the environmental document for Ruby 1, Ruby 2, Patrick Creek Narrows, and Narrows and Washington Curve.

In September 2020, it was reported that the Crescent City Harbor District added support to the Del Norte Local Transportation Commission for a project to bring Route 199 and Route 197 up to 1982 trucking standards. Harbor commissioners unanimously approved a resolution reaffirming their support for the project, which has been stalled when Friends of Del Norte, the Environmental Protection Information Center and the Center For Biological Diversity obtained an injunction in 2014. The Harbor District’s vote comes about two weeks after a federal judge in the case awarded intervenor status to the Del Norte Local Transportation Commission. According to a staff report, the Local Transportation Commission argued that it is local elected officials, not the litigants, who represent the public. The Del Norte Unified School District Board of Trustees has also unanimously declared their support for the STAA 197/199 project, stating that widening the road is also essential for school buses. The $34 million project includes widening three curves on US 199 and replacing a bridge that was built in 1924. It also consists of widening two curves on Route 197 near Ruby Van Deventer County Park. Caltrans’ goal is to make the project safer for trucks meeting the 1982 Surface Transportation Assistance Act (STAA) standard. The project has been paid for with state and federal dollars since 2008 and was about to enter the construction phase when Friends of Del Norte, EPIC and Center For Biological Diversity initiated a lawsuit that stalled the project in 2014. The three conservation groups argued that allowing for the larger STAA trucks would increase, rather than decrease the risk to safety on the two roads. The three groups are also concerned about the possibility of a hazardous material spill impacting the Smith River. However, restricting the travel of trucks carrying hazardous materials down US 199 and Route 197 could circumvent that argument.
(Source: Wild Rivers Outpost, 9/1/2020)

In 1933, Chapter 767 defined the route from "[LRN 77] near Escondido to El Cajon-Santa Ysabel Road near Ramona" as part of the state highway system. In 1935, this route was added to the highway code as LRN 197 with the routing:

This definition remained unchanged until the 1963 renumbering. The route ran from US 395 (present-day I-15) near Escondido to the Route 67/Route 78 junction near Ramona. This is present-day Route 78.