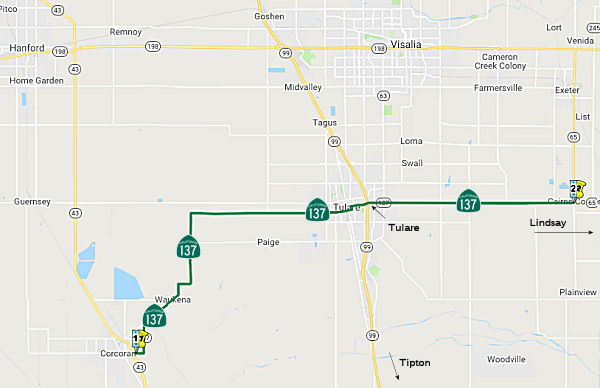 From Route 43 near Corcoran to Route 65 near Lindsay via Tulare.

In 1963, this was defined as the route from "Route 43 at Corcoran to Lindsay via Tulare." Note that, although defined in 1963, it appears that a small portion (between Route 99 and Route 63) was signed as Route 63, possibly instead of or in addition to Route 137 signage.

Caltrans is exploring creating a roundabout on this route at the intersection of Route 43/Route 137 in Corcoran (137 KIN 0.0). Other potential/planned roundabout locations in the San Joaquin Valley include Route 145/Jensen near Kerman, Route 168/Auberry Road in Prather, Route 155/Browning Road in Delano, Route 216/Route 245 in Woodlake, Route 190/Road 284 east of Porterville, and Route 190/Road 152 east of Tipton. A 2007 study of 55 roundabouts in the U.S. found a 35% reduction in accidents and a 90% reduction in fatal accidents when intersections with stop signs or signals were converted to roundabouts. It costs about the same to build a roundabout as to put up traffic signals, and they need significantly less maintenance than traffic signal intersections -- about 60% to 90% less, depending on how much landscaping work is required.

In May 2016, the CTC approved for future consideration of funding a project in Kings County that will construct a roundabout at the intersection of Route 43 and Route 137 near the city of Corcoran. The project is programmed in the 2014 State Highway Operation and Protection Program. The total programmed amount is $4,400,000 for capital and support. Construction is estimated to begin in Fiscal Year 2016-17. The scope, as described for the preferred alternative, is consistent with the project scope programmed by the Commission in the 2014 State Highway Operation and Protection Program. A copy of the ND has been provided to Commission staff. The project will result in less than significant impacts to the environment.

In 1933, Chapter 767 added the route from "[LRN 2] near Santa Margarita to Moro-Fresno Road near Creston" to the highway system. In 1935, this was added to the highway code as LRN 137, with the definition: