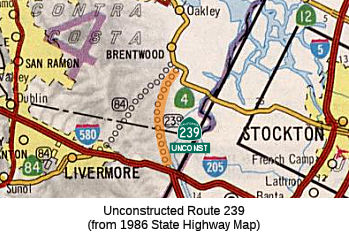 FromRoute 580 west of Tracy to Route 4 near Brentwood.

This route remains as defined in 1963. The traversable route is Mountain House Road and Byron Highway. Caltrans has no plans to adopt this route.

This route was part of proposed LRN 110, defined in 1959. It was unsigned and unconstructed, although it appears to follow the route of Contra Costa/Alameda/San Joaquin County Sign Route J4.

This routing is unconstructed. The traversable local routing is along Mountain House Road, and Byron Highway, as well as Vasco Road and Walnut Blvd. These existing roads are substandard for incorporation into the state system.

This route was originally planned to be a portion of the Mid-State Tollway between Sunol and Vacaville. The tollway was a proposal that would start off of I-680 near Sunol, cross I-580 west of Livermore (roughly along the alignment of the Livermore Bypass), and then will extend north to Route 4 near Antioch. A spur will come off the tollway near Brentwood and run SE to the junction of I-580 and I-205. The tollway could be designated Route 84, since it roughly follows the built and unbuilt portions of the route and the spur could be designated Route 239, since it follows the general routing for that unbuilt highway. The tollway was originally supposed to extend to I-80 between Vacaville and Dixon with a spur connecting with I-505 at the 80/505 junction, but that portion was killed due to the need for high-level crossings (150') of the San Joaquin and Sacramento Rivers plus environmental issues.

Note: For additional information on the Mid-State Tollway, see Route 84.

Scott Parker noted on AAroads that the tollway would have utilized the path of the oft-considered Route 239, Route 4 between Byron and Antioch, the Antioch (Route 160) bridge, and diverged from Route 160 north of there to cross the Sacramento River. It would have had terminating "splits" at both ends; a Route 84-based branch along Vasco Road, passing between Livermore and Pleasanton, and terminating at the Route 84 interchange with I-680 was to be a SW branch, while the main trunk, after crossing the Sacramento River, would have headed toward Elmira, where it would split into two branches, one intersecting I-505 about a mile or two north of I-80 (after crossing the latter freeway) and the other heading toward Dixon and the I-80/Route 113 freeway interchange between Dixon and Davis -- the Route 113 freeway would have been its functional extension. The toll road idea, formulated in the late '80's and early '90's, would have required a doubling of the Antioch Bridge as well as a 4-lane high-level bridge (likely cable-stayed) across the Sacramento River north of there. Even in 1992, the cost for doing the full project was projected at well over $2 billion; with the center section along Route 4 remaining a free facility (the present Antioch Bridge toll facility would have marked the southern end of the northern toll section). The Route 84 branch was itself mired in controversy; in the '90's the development of the Brentwood area as an "overflow" housing region for Silicon Valley employment was in its initial stages; deploying a toll road to serve that commute traffic was seen as gratuitous money-grubbing and that a conventional freeway would be more appropriate. But by 1998 the entire project was functionally scrapped because of the enormous cost; projected toll revenue was far too meager to even cover the initial construction -- likely due to the myriad opportunities for shunpiking as well as the perception that the northern section had limited commuter value and what revenue would accrue would come from commercial usage -- the most likely candidates to avoid the tolled facility!
(Source: AARoads "Re: I-5 West Side Freeway", 12/29/2019)

In 1996, this project was dubbed the Brentwood-Tracy Expressway and identified in a Metropolitan Transportation Commission (MTC) study as a long-range project that could benefit the corridor.
(Source: The Press, 7/21/2006) 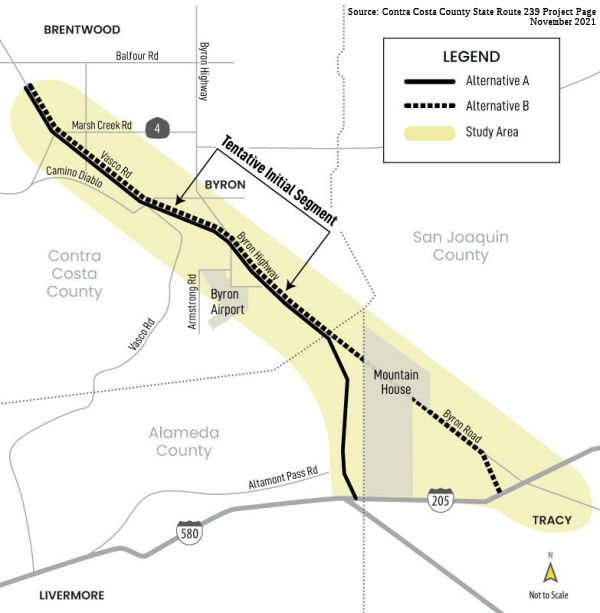 By 2000, plans and projects were already in progress to better connect East Contra Costa County with points west. These include the Route 4 Freeway Widening Project, the Route 4 Bypass, and the eBART system that was then in the planning and environmental review stages. Given the success in moving these westward connections along, there was increasing discussion on the need for better connections in the other direction as well -- from East County to points east. East County roadways were experiencing a significant increase in truck traffic to and from the Central Valley, and this, combined with the rapid growth of East County and limited roadway capacity to the east, led to the desire to seek funding for a major planning effort to improve these connections. As such, the County requested an earmark for Route 239 because of growing interest in better highway links to the Central Valley. In the early 2000s, the only connections between East County and the Central Valley were undivided two-lane roads (the Byron Highway and Route 4 east of Discovery Bay). The concept of an improved highway link known as the Brentwood-Tracy Expressway had been included for years in the Metropolitan Transportation Commission’s Regional Transportation Plan, but no progress has been made on planning the route. MTC considered it a long-term, unfunded concept and therefore did not place any priority on it. The County and the Contra Costa Transportation Authority asked Caltrans several times to begin the planning and technical studies for the new route, without success. The County therefore requested a federal appropriation (earmark) through the office of Representative Pombo to start planning this long-sought highway. The request was successful and the County was awarded $14 million for the project in 2005.
(Source: Contra Costa County Status Report, 12/10/2008)

In 2005, Contra Costa County secured federal funds to initiate a feasibility study and a project initiation document (PID). During the study phase of this project between the spring of 2012 and the winter of 2013, a variety of stakeholder meetings were held and several important themes emerged, including consideration of how a new route in eastern Contra Costa might affect conservation areas, agricultural lands, bird flight paths, and growth in the area. These considerations set the stage for continued outreach during future project development phases. The PID was completed in 2015 and the environmental study phase has been initiated.
(Source: Contra Costa County State Route 239 Page, November 2021)

In July 2006, it was reported that more than $15 million of federal funds has been earmarked for planning work for the proposed Route 239. However drivers will wait an estimated five years (until 2011) to see any real construction begin, according to planners. Planners consider rural Byron Highway (officially County Sign Route J4) that follows the Union Pacific railroad tracks from Byron to Tracy woefully inadequate for the volume of traffic that rolls along it every day. Byron residents have long complained about heavy trucks creating noise, safety hazards and congestion during peak commute hours. Route 239 has been a gleam in the eye of transportation planners for some time now as part of the California Inter-Regional Improvement program. Route 239 is currently a legislatively approved but as yet unconstructed route in the state highway system. The project got a big boost thanks to Congressman Richard Pombo securing the federal funding for preliminary scoping and planning work. The project needs to jump through various hoops to secure the funding to reach the construction phase, which will probably take several years to complete. Those hoops include a reconnaissance phase currently under way, followed by a feasibility study, environmental review, route adoption proposal, and right-of-way preservation. The initial $15 million in funds will pay only for preliminary planning, environmental review and public outreach over the next couple of years.
(Source: The Press, 7/21/2006)

There is also an effort by Rep. Pombo to build a freeway along the Route 239 corridor. This freeway would would run along the path of the two-lane Byron Highway from the western end of Tracy northwest to Brentwood. There, it would connect with the Route 4 bypass currently scheduled for construction. Brentwood political leaders have been pushing for the new freeway to provide the city with a thruway to I-5, I-580, and I-205. The plan is to attract white-collar and industrial businesses and transform the city from a bedroom community to a job center. The new freeway proposal also will give Tracy commuters a connection to the north, and an alternative commute route to the East Bay. An article in the East Bay Express notes that the arrival of the federal funds for the Route 239 project also happens to coincide with a multimillion-dollar land deal currently underway with members of Pombo's family.
(Source: Michael Patrick's Blog, 8/28/2005)

Although the funds were awarded in 2005, the county did not begin the formal process of accessing the funds until 2008 due to issues with the way the earmark was written and questions about eligible uses of the funds. These issues were primarily that the earmarks granted to the County were for a different purpose than the County had requested. CC County requested funds for planning, consensus-building and environmental review to determine the preferred alignment for the new highway. However, the appropriations we received were for study and “construction” of the highway. The County did not envision any construction being performed with the requested funds. This led to unexpectedly lengthy discussions and correspondence with Caltrans on how to resolve the situation. The feedback from Caltrans, as recently as April 2008, was that the county had to construct the new highway or else we would have to give back the $14 million. However, at a meeting with Caltrans staff on September 9, 2008, all parties seemed to understand that a new highway  from Brentwood to Tracy cannot be built with $14 million. The county discussed their intent to use the funds for planning, technical alignment studies and outreach to the affected communities, hopefully resulting in
consensus on the preferred alignment for the new highway, and for pre-construction activities such as environmental review, preliminary engineering and design, and right-of-way acquisition. After those steps are all complete, it is possible a small amount of funds may be left available for a small amount of construction. County staff explored resolving the “construction” problem through federal legislation that would remove the word “construction” from the earmark language. However, that possibility was complicated by the fact that the earmark sponsor (former Rep. Pombo) was no longer in office. Congressional custom apparently dictates that earmark language is not changed unless the sponsoring member approves of the change, even if he or she is no longer in office. Therefore a legislative solution would have been difficult, and the current  congressional representatives did not seem eager to attempt it.
(Source: Contra Costa County Status Report, 12/10/2008)

In 2008, the County received a status report on this project. The report noted that County staff is completing the required paperwork to submit to Caltrans in order to access the funds. This process is known as a Request for Authorization, and is required any time the County seeks access to federal grants. Caltrans administers the federal funds, so the county request goes to them. The Request for Authorization includes standard forms that must be filled out, and a work plan that outlines how the County will carry out the project. Staff intends to submit the request by the end of 2008. Caltrans must review and approve the submittal before they grant access to the funds. The submittal is being developed jointly by the Public Works Department and the Department of Conservation and Development.
(Source: Contra Costa County Status Report, 12/10/2008)

The Goals of the project are as follows:
(Source: Contra Costa County State Route 239 Page, November 2021)

In 1957, Chapter 23 defined LRN 239 as “a point on [LRN 56] near Daly City to a point on [LRN 2] near San Jose on a route to be selected by the California Highway Commission, which route may include all or portions of any existing state highway route or routes”. The urgency clause noted this was related to a circumferential freeway around San Francisco Bay.