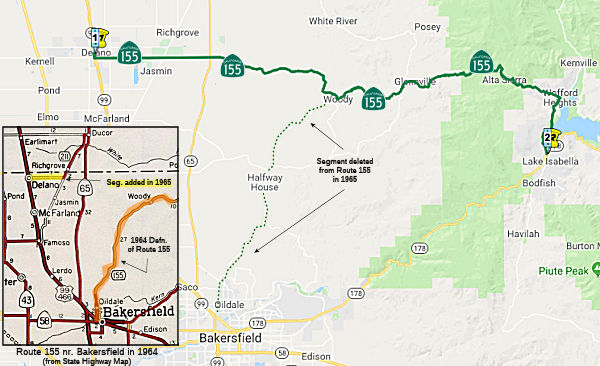 From Route 99 near Delano to Route 178 near Isabella via Glennville.

In 1963, Chapter 385 ("Great Renumbering") defined this route as "Route 99 near Bakersfield to Route 178 near Isabella via Glennville.", although Chapter 1698 quickly changed "Route 99" to "Route 204", reflecting the rerouting of Route 99 onto the freeway routing.

"There was never any field signage of the original Route 155 from Route 204 to the point where it was realigned toward Delano, which occurred in late 1966. Also involved in that process was the former Route 211, which headed east from Delano to the diagonal road that paralleled the (former) SP tracks northeast to Route 65 at Ducor. That diagonal alignment was the original Route 65 route, which diverged from US 99 near Famoso, where former US 466/present Route 46 intersects Route 99 today. In one fell swoop in 1966, Route 155 was commissioned from the turning point on Route 211 (which was never signed in the field) eastward on Garces Highway to the original Route 155 (former LRN 142) alignment, continuing northeast and east on the original alignment to the Lake Isabella area and its Route 178 terminus. The Route 211 designation was deleted from the books (but later re-used in Humboldt County). The portion of Route 155 from Bakersfield to the realignment point was subsequently relinquished."

The original definition of this route was all of the original LRN 142, defined in 1933. See LRN 142 for the details of this version of the route. After 1965, a portion of LRN 136 (between Route 99 and the Famoso-Porterville Highway) was added. The remainder of this route (a direct route from the Famoso-Porterville Highway to Woody) was not defined before 1963.

Caltrans is exploring creating a roundabout on this route at the intersection of Route 155/Browning Road in Delano (~ KER R1.47). Other potential/planned roundabout locations in the San Joaquin Valley include Route 145/Jensen near Kerman, Route 168/Auberry Road in Prather, Route 43/Route 137 in Corcoran, Route 216/Route 245 in Woodlake, Route 190/Road 284 east of Porterville, and Route 190/Road 152 east of Tipton. A 2007 study of 55 roundabouts in the U.S. found a 35% reduction in accidents and a 90% reduction in fatal accidents when intersections with stop signs or signals were converted to roundabouts. It costs about the same to build a roundabout as to put up traffic signals, and they need significantly less maintenance than traffic signal intersections -- about 60% to 90% less, depending on how much landscaping work is required.

In June 2020, the CTC authorized relinquishment of right of way, consisting of collateral facilities, in the City of Delano, Kern County, along Route 155 and Browning Road (06-Ker-155-PM R1.46). This could be related to the Browning Road roundabout.
(Source: June 2020 CTC Agenda, Agenda Item 2.3c)

In December 2020, the CTC authorized relinquishment of 06-Ker-155-PM R1.46 (2 segments), right of way consisting of collateral facilities, in the county of Kern along Route 155 on Browning Road. The County agreed to waive the 90-day notice requirement and accept title upon relinquishment by the State under the terms and conditions stated in the relinquishment agreement dated September 17, 2020.
(Source: December 2020 CTC Agenda, Agenda Item 2.3c)

Note: There are extremely steep grades on the east end of this highway.

The segment of this route from Route 58 to Kernville via the Caliente-Bodfish Road) was historically named the "Lions Trail".

This routing remained unchanged until 1963. It was all signed as part of Route 23, and included portions of Decker Canyon Road and Westlake Road.