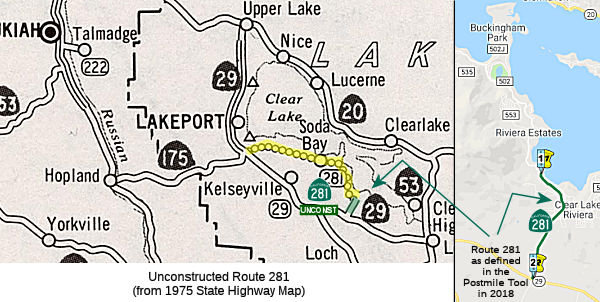 Most Legislative Routes adopted under 1970 Legislative Chapter 1473 were contingent upon a local authority building an existing highway up to State Standards before maintenance would be assumed.  Route 281 appears in its current configuration on the 1975 Caltrans Map that suggests that Lake County was only able to fund 3 miles of building Soda Bay Road to State Standards.  Soda Bay Road has been around for a significant period of time as it can be seen on the 1917 California Automobile Association Map; it was shown as a minor highway on a 1935 map.

Route 281 has 3 constructed miles that appear in the Caltrans Post Mile Tool as Post Mile LAK 14.0-17.0 on Soda Bay Road. Soda Bay Road northwest to CA 29 more or less is the implied connection of CA 281 beyond State Maintenance. This was improved to a state highway sometime back in the 1990s, as the traversable highways report discussed improvement of the existing county road to state standards is planned for the distant future (PM 13.2 through PM 14.0).
(Source: Gribblenation Blog "The Paper Highways north of San Francisco Bay; CA 12, CA 17, CA 37, CA 181, CA 251, and CA 281")

This routing is unconstructed from 3 mi NW of Route 29 south of Lakeport to Konocti Bay (Konocti Bay Road), although Soda Bay Road and County Road 502 appear to cover the route.

This is Route 117, currently numbered as Route 905 from I-5 near the S end of San Diego Bay to E of Brown Field.