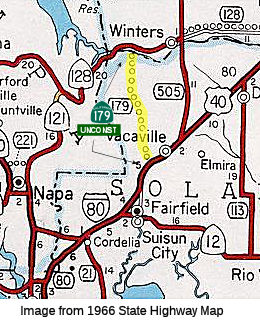 From Route 80 near Vacaville to Route 128 near Berryessa Reservoir.

The Route 179 corridor dates back to LRN days; it was first delineated back in '59 with the first iteration of the California Freeway & Expressway program. [Back then] Lake Berryessa was intended to be much more a recreational destination than it is today; the corridor was simply to provide direct access from I-80 to Route 128 near the dam, and from there around the lake to the various beaches, boat ramps, and the like. Since that time, the lake purpose has been revisited; while there are some boat ramps and shoreline recreational areas, those are primarily near the lakehead some 20 mile NW of the dam area and not really readily accessible from the south end except by twisting county roads -- the easiest access is actually from Middletown in Lake County, NW of the lake itself. Most of the lakeshore remains undeveloped -- and will almost certainly remain such. Without that sort of demand, there's no rationale for improvement of the erstwhile Route 179 corridor.

The traversable local route is Cherry Glen Road and Pleasant Valley Road. A specific routing has not been determined. There is no recommendation to adopt these roads into the state system.

[SHC 253.1] Entire route; unconstructed. Added to the Freeway and Expressway system in 1959.