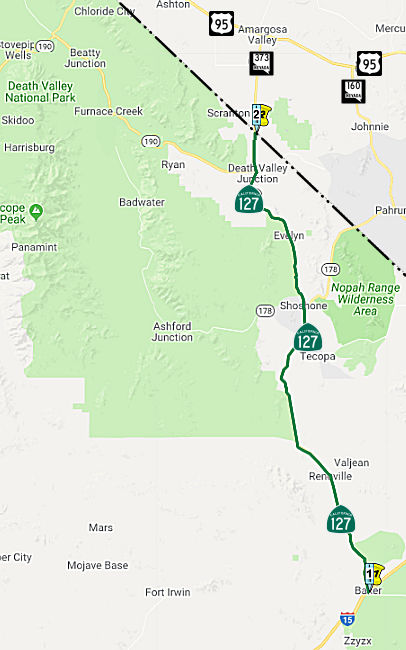 From Route 15 near Baker to the Nevada state line via the vicinity of Death Valley Junction.

As of 2018, Route 127 was a two-lane undivided highway on generally level terrain set in a rural, desert landscape. The lanes are 12 feet wide in each direction with 1-foot wide shoulders. The opposing traffic along the majority of this segment is separated by double-yellow lines. The elevation ranges from approximately 587-feet to 594-feet above mean sea level from south to north. There are no utilities, airports, housing, or railroads in the vicinity of the project. The route is functionally classified as a Rural Minor Arterial, connecting southeastern California to Nevada and other rural highways. The route is part of the Interregional Road System (IRRS) and is included as a Terminal Access Route within the Surface Transportation Assistance Act (STAA) Network. Route 127 serves local, interregional, recreational, and goods movement traffic while providing access to Death Valley National Park and other recreational lands.
(Source: Route 127 Rumble Strips Initial Study and [Proposed] MND, April 2018)

In 1934, Route 127 was signed from Jct. US 91 at Baker to the California-Nevada State Line near Death Valley Junction. It was LRN 127 between Baker and Death Valley Junction (junction Route 190), and LRN 128 from Death Valley Junction to the Nevada state line. Both routes were defined in 1933. This is one of those rare routes (Route 58 is another) where the pre-1963 legislative number and the signed number are the same.

Caltrans characterized the history of the route as follows in a recent EIR:
(Source: Route 127 Rumble Strips Initial Study and [Proposed] MND, April 2018)

Route 127 is a north-south highway that begins at I-15 near the community of Baker, continues north past the San Bernardino County line into Inyo County, and ends at the California-Nevada State border at Nevada 373. Route 127 is eligible for the State Scenic Highway System; however, it has not been designated by Caltrans as a scenic highway. In 1933, Route 127 was added to the State Highway System and went from I-15 in Baker to Death Valley Junction; Route 128 during this time continued from there to the Nevada state line. In the state highway renumbering of 1964, Route 127 was re-defined from I-15 to the Nevada state line and has remained unchanged since. 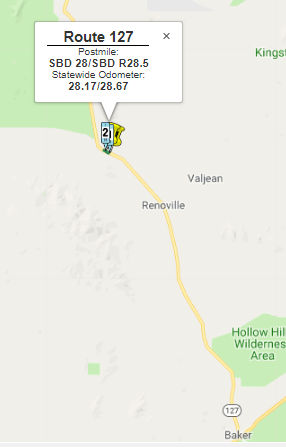 In January 2018, it was reported that Caltrans was planning to widen the shoulders of Route 127 in Fall 2018 and to install rumble strips between PM SBD 28.0 and SBD 28.5. Caltrans plans to construct 8-foot-wide shoulders and install 12-inch-wide rumble strips along each direction and the centerline of the highway in an unincorporated area of San Bernardino County. Light grading will also be performed to accommodate shoulder widening. The safety project is scheduled to be completed in early 2019.

In April 2018, Caltrans posted the Initial Study / with [Proposed] Mitigated Negative Declaration for the Route 127 Shoulder Widening and Rumble Strips Project, 08-SBD-127 (PM 28.0/28.5). Caltrans proposes to construct, in both directions, eight-foot shoulders and install in-ground rumble strips (12 inches wide), along the centerline and shoulders on Route 127 from Post Mile (PM) 28.0 to PM 28.5, located 28 miles north of the nearest community of Baker in San Bernardino County. These improvements would occur from the beginning of curve to the end of curve, and transitions. The granting of a 40-foot easement from the centerline (in both directions) of undeveloped U.S. Bureau of Land Management (BLM) land is anticipated.
(Source: Route 127 Rumble Strips Initial Study and [Proposed] MND, April 2018)

In August 2018, the CTC approved for future consideration of funding the following project for which a Mitigated Negative Declaration (MND) has been completed: Route 127 in San Bernardino County (08-SBd-127, PM 28.0/28.5). Construct roadway improvements on a portion of Route 127 near the town of Baker. (PPNO 0216F) This project is located near Baker, south of Saratoga Springs Road in San Bernardino County The project proposes to widen and construct paved shoulders and ground-in rumble strips on Route 127. The project proposes to reduce the number and severity of cross centerline and runoff road type collisions. The proposed project is currently estimated to cost approximately $2.5 million in capital and right of way. The project is fully funded and is currently programmed in the 2016 SHOPP for approximately $2.5 million which includes Construction (capital and support) and Right-of-Way (capital and support). The project is estimated to begin construction in 2019. The scope, as described for the preferred alternative, is consistent with the project scope programmed by the Commission in the 2016 SHOPP.
(Source: August 2018 CTC Agenda Item 2.2c(1))

In 1933, Chapter 767 added the following routes to the state highway system: "

In 1935, LRN 127 was added to the highway code with the following definition, which covered most of these routes:

The "connection to the California-Nevada State Line" was added as part of LRN 128.

This was signed as follows:

Note: The Gribblenation Blog on Route 136 (Tom Fearer) has a bit more information on the routings of LRN 127 and the timing of acquisitions. The following is a quote from the blog, in case the page disappears (module some terminology adjustments):

The routing of Route 136 was part of Legislative Route Number (LRN) 127. LRN 127 was adopted in 1933 and generally was signed as Route 190 through all segments of the highway. The original routing of LRN 127 can be seen on the California Division Highways Map of Inyo County. Interestingly LRN 127 is shown running on Horseshow Meadow Road to Lonepine and has a gap from the yet obtained Eichbaum Toll Road in Panamint Valley.

By 1964 the California Highway Renumbering had occurred and a new number of 136 was assigned to the highway between Lone Pine to the modern Route 190 junction at Owens Lake.