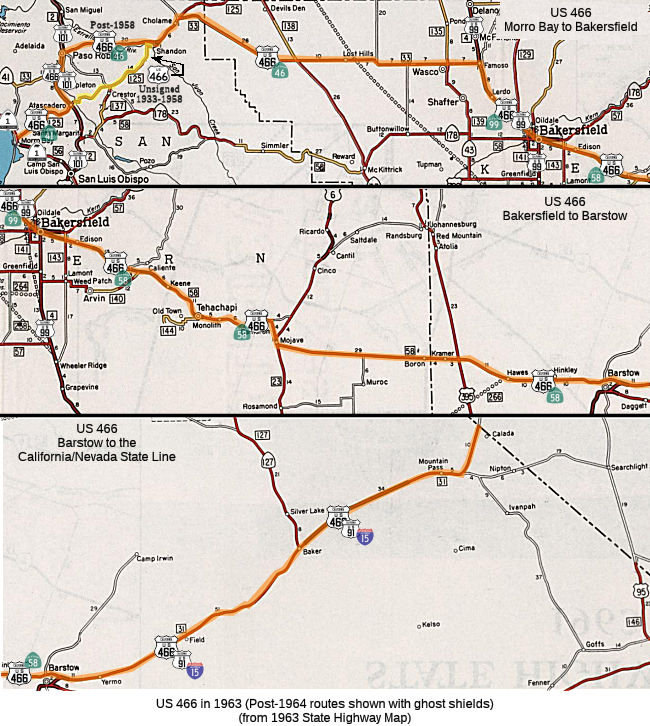 No current routing. Note that the map to the right does not show some of the reroutings near Atascadero and Paso Robles, which are explained in the next map.

As part of the renumbering in 1964, signage of US 466 was truncated to end in Baker (California Route 58, former US 466, ended in Barstow). This truncation would see US 466 terminate on Baker Boulevard at the intersection with Route 127/Death Valley Road.  See the linked Gribblenation blog for more details, including links to maps and pictures.
(Source: Gribblenation Blog (Tom Fearer), “Interstate 15; the Mojave Freeway from Barstow to the Nevada State Line”, April 2021; “Former US Route 91 and US Route 466 in Baker”, April 2021)

In 1971, US 466 was eliminated as a US Route by the AASHO Executive Committee.  This request was made by the Division of Highways in reference to the remaining segment of US 466 multiplexed with I-15 to Route 127 in Baker.
(Source: Gribblenation Blog (Tom Fearer), “Interstate 15; the Mojave Freeway from Barstow to the Nevada State Line”, April 2021) 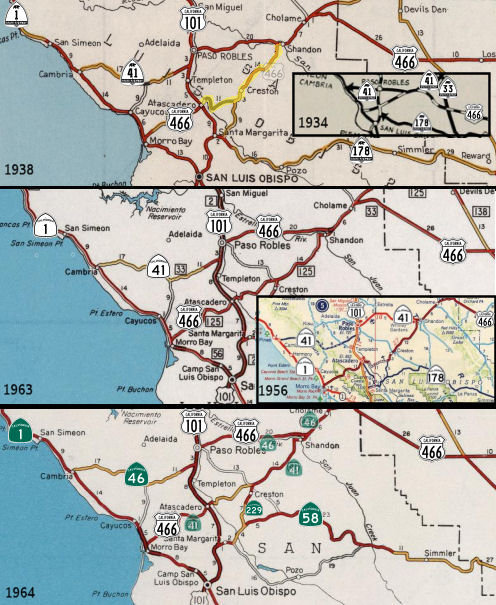 The first intimations of what would become US 466 were under a different number. In 1933, US 64 had been extended west to Santa Fe. Pressure began to extend the route all the way to the West Coast from highway officials in New Mexico, Arizona, California (and even North Carolina, where the east terminus of the route is located). AASHO didn't like this idea, as it required cosigning a large portion of the route with US 66. However, they did vote on it.  AASHO raised the objection that US 64 would have to be dual-signed with US 66 for hundreds of miles, but nevertheless they put the proposal to a vote at their August meeting. The majority of the committee voted to not extend US 64, but instead to create a new US route designation only along the segment that was separate from US 66 (i.e., starting in Barstow (written erroneously as "Blythe"). It was assigned the number 466. California objected, but eventually relented. US 466 was commissioned in 1933, effective the first day of 1934, with an eastern end in Kingman AZ.
[More details, including excerpts from AASHO documents and maps, may be found in the source link]
(Source: USends.Com, “End of historic US highway 466”, March 2022)

In 1934, signed US 466 was commissioned, running over a variety of legislative routes. Until July 1, 1964, the following route was signed as US 466:
(Source: Tom Fearer (Max Rockatansky) and the crew at AARoads for helping to sort this out)

Additionally, LRN 141 was the planned rerouting for US 466 to bypass downtown Bakersfield (back when LRN 4/US 99 (and US 399) was on the Route 204/Business Route 99 alignment) back in 1933; this rerouting only occured in the 1960s however with the construction of the freeways which are now Route 58 and Route 58/Route 99 (explaining why the definition of the route is from LRN 4 to LRN 4: from Brundage at Route 204 to the current Route 99/Route 58/Route 178 interchange at Rosedale Highway/24th Street, where Oak Street ends). Looking at the bridge log, the Route 204/Business Route 99 (former LRN 4) freeway in downtown Bakersfield between LRN 141's two termini (current Route 58 and Route 99) was built in stages: the first section, the Union Avenue Y, was finished in 1957, followed by the Truxtun Avenue crossing in 1959. Most of the section north of L Street and the Chester Avenue traffic circle was also built in 1957; so the construction of the LRN 141 (99/58) freeways occured only once CalTrans decided that the old downtown bypass was more suitable for the through routes. The interchanges connecting Business Route 99 with Route 99 were built in 1962 and 1963, as part of the Bakersfield bypass. Thus by 1964, former LRN 141 had been upgraded to freeway between Brundage Lane and Rosedale Highway; however, the portion from Union Avenue (Route 204/Business Route 99) west to Route 99 would not be built until 1976, at which point Route 58 was moved off of former US 466/LRN 58 (Edison Highway) and onto the new freeway, which is part of the Bakersfield-Tehachapi Highway.

Scott Parker on AARoads provided more information on the planning for the Barstow Bypass: When the original I-15 Barstow Bypass was built, one of the design features—the wye interchange for the business loop, featuring left-exits and entrances from and to NB I-15—was to be the original junction of westward US 466, which was, like its relocated Route 58 successor, planned to be a freeway for at least the portion crossing the Santa Fe yards and the adjacent Mojave River.  But that configuration never came to fruition, partially because Santa Fe expanded their yards westward, relocating the junction between the L.A. and Bay Area lines to right where the US 466 freeway was intended to go.  Not wanting to deploy a continuous line of longer bridges—and rethinking the left-exit/entrance concept—Caltrans D8 negotiated an alternate parallel path a little less than a mile west—and coordinated with Santa Fe for a mutual easement for both (by then) the Route 58 freeway stub and the relocated line to Mojave, Bakersfield, and beyond.  The rail line and the 1997-opened Route 58 freeway shadow each other into Hinkley before diverging.  But from 1961 to the 1964 statewide renumbering, the plans were for both US 91 and US 466 to follow I-15 to the original west Barstow interchange, where US 466 would diverge—but for about two miles US 466 and "parent" US 66 would have a shared alignment once the original freeway plans were realized.
(Source: Scott Parker on AARoads, “Re: Former US Route 91/466 in Baker”, 4/9/2021)