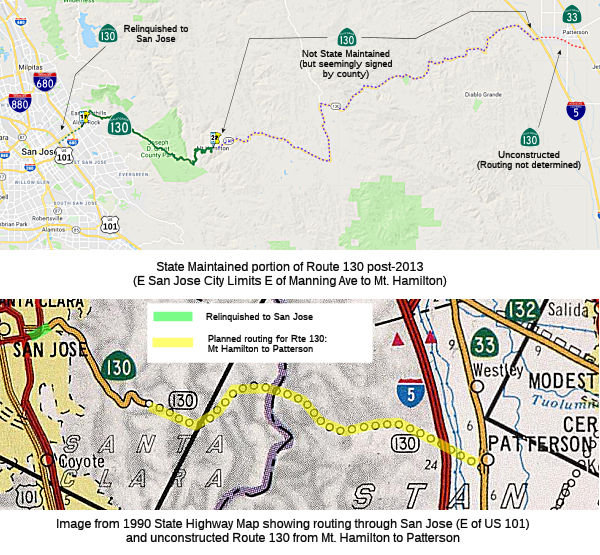 (a) From the eastern city limit of the City of San Jose near Manning Avenue to Route 33 near Patterson via the vicinity of Mount Hamilton.

In 1963, this route was defined to run from “Route 101 near San Jose to Patterson via the vicinity of Mount Hamilton.”.

In 1988, Chapter 106 clarified the definition: "Route 101 near in San Jose to Route 33 near Patterson via the vicinity of Mount Hamilton."

It appears that one of the past supervisiors (Rodney Diridon) wanted to turn Route 130 into a freeway to link San Jose better with I-5. The freeway would have bypassed the observatory. It would start at I-5 and Del Puerto Canyon Rd, follow Del Puerto Canyon Rd to San Antonio Valley Road, and then veer off to the north towards Route 680 and Route 237 or towards the south towards Quimby Rd or towards Evergreen. This is also been proposed by Rep. Richard Pombo, R-Tracy.

In December 2011, the CTC authorized relinquishment of right of way in the city of San Jose on Route 130 from Route 101 to Millar Avenue, under terms and conditions determined to be in the best interest of the State, as stated in the relinquishment agreement scheduled to be approved by the City at their November 29, 2011 Council Meeting. Authorized by Chapter 448, Statutes of 2010, which amended Section 430 of the Streets and Highways Code.

(a) From the eastern city limit of San Jose near Manning Avenue to Route 33 near Patterson via the vicinity of Mount Hamilton.

As of February 2018, it was reported that there is no longer any reference to Route 130 from US 101; all the original button-copy signs dating from the 1990s featuring Route 130 shields have been replaced by bright green reflective-sheeting sign material; the advance and exit signs now read "Santa Clara Street/Alum Rock Avenue", sans any shields. This makes Route 130 is now officially and functionally an "orphan" on Mt. Hamilton Road. There was never any signage at I-680, save for the post-mile stenciling on the overpass at Alum Rock.
(Source: Scott Parker (Sparker) on AARoads, 2/19/2018)

Field reports indicate that signage of the route E of Mt. Hamilton is performed by the county, not the state. It also appears the route is maintained by the county between Mt. Hamilton and Patterson. This is based on physical verification, not Caltrans information. Reports indicate that Route 130 has the usual green miner's spade sign till you reach the observatory, then after that it has a white miner's spade (with green numbers) printed on a large green rectangular sign until you reach Stanislaus County (see the picture to the right taken by Carl Rogers). Between the Lick Observatory and the county line, Santa Clara County Department of Roads and Airports seems to be in charge of maintenance. All barricades along the routing mention the department. It is totally unsigned in Stanislaus County. Officially, the route is undetermined from Mt. Hamilton to Route 33 near Patterson.

According to the Traversable Routing report, the traversable routing from Mt. Hamilton to the Stanislaus County line is along San Antonio Valley Road and Del Puerto Canyon Road. This routing is substandard, and no improvements are anticipated.

There were also some proposals to build a new parallel highway to bypass the Alamont Pass. Specifically, a proposal made by former Congressman Richard Pombo (R-Tracy) that would hvae connected Route 130 and I-5. The San Jose Mercury News published an article showing cost estimates for this in the $10 billion range, and projected tolls around $25-50 per trip. This reached the study phase, with $2 million funding in the 2005 Transportation Bill for a study of a possible new highway over the Diablo Range in California (I-680 in San Jose to I-5 in Patterson/Central Valley). Some of the problems with this routing included (a) very rugged country with mountain ranges that run perpendicular to the proposed route; (b) peaks over 4,000 feet; (c) a very rural area, with cattle ranches, a few houses, boy scout camps, state and county parks, and much wildlife (read: expensive environmental impacts); and (d) presence of the Lick Observatory, which is very sensitive to light pollution.

The East Bay Express had an interesting article on this. It noted that in 2003, Rep. Richard Pombo proposed that Route 130 be replaced with a six-lane, cars-only freeway that would start at I-5, just west of Patterson in Stanislaus County. It would then run the traditional route of Route 130, following the narrow, twisting path of Del Puerto Canyon Road and connecting with San Antonio Valley Road. It would traverse Mount Hamilton, past the Lick Observatory, before finally ending in East San Jose at I-680. Today the entire 63-mile trip takes about three hours, and contains a minimum of 365 switchbacks. This new freeway would cut through a large segment of a rugged, 150-mile-long mountain range where no natural pass exists. According to the article, the remote countryside between Silicon Valley and the Central Valley is one of the best-kept secrets in the Bay Area and provides a dizzying array of hills, mountains, and valleys, with rolling grasslands and pine-covered peaks studded with oaks and cattle ranches and teeming with wildlife: rattlesnakes, eagles, bobcats, tule elk, red- tailed hawks, and mountain lions. It is also habitat for endangered and threatened species, such as the bay checkerspot butterfly, the California red-legged frog, and, of course, the San Joaquin kit fox. It is noted that speculation about the possible new freeway drove up the value of the 205-acre ranch Pombo owns in south Tracy with his parents and brothers; this property sits right on I-580.

However, the article noted that Pombo was looking to move Route 130 farther north, closer to Tracy. The specific routing was unknown, but it was believed that the new freeway might parallel I-580, just south of the Altamont Pass, and slice through the wine country of southern Livermore and southern Pleasanton before linking up with I-680 north of Sunol. This is less rugged than the original proposed route, would not be so expensive, and would wreak far less environmental damage. It also fits with the SAFETEA-LU wording. The East Bay Express article noted that if the freeway is moved north, it would be much closer to Pombo's property, thereby adding even more value to it.

Pombo's defeat in the elections of 2006, however, killed the proposals for this road.

In 1933, Chapter 767 defined the route from "Orosi to Bakersfield-General Grant Park Road" as a state highway. This was codified into the highway code as LRN 130, with the definition: