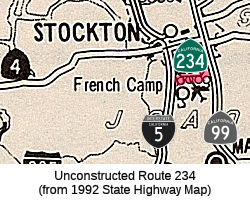 FromRoute 5 near French Camp to Route 99.

This routing is unconstructed. According to one Caltrans document, the traversable route is French Camp Road (San Joaquin County Sign Route J9). However, one Caltrans map makes the route appear to be Arch-Airport Rd. In 1983, San Joaquin County passed resolution R-83-1461 for procedures to be followed to include French Camp Road in the state highway system as Route 234 and Eight-Mile Road as Route 235. On November 29, 1993, San Joaquin County adopted Eight-Mile Road as an arterial highway and dropped interest in it as a state highway. They have not shown an opinion on French Camp Road. Caltrans has no plans to assume maintenance of the traversable route.

“…the Nevada State Line across the Sierra Nevada Mountains into the San Francisco Bay area on a route to be selected by the California Highway Commission, which route may include all or portions of any existing state highway route or routes. The commission, in determining said route, shall consider military necessities and recommendations appropriate federal authorities.

The commission shall allocate from time to time as federal funds, other than regular federal aid apportionments, are made available as required in this section from the State Highway Fund the sum of twenty million dollars ($20,000,000), for the construction of said route. Such money shall be made available in equal parts in the five fiscal years next succeeding the effective date of this section to the extent that such federal funds are available for matching purposes in each of such years. The allocation of money provided for in this section shall be made out of moneys contained in the State Highway Fund available for construction of state highways in County Group No. 1, but which is not subject to Section 188.4 of this code; and expenditures from such allocation shall be credited against the expenditure required to be made pursuant to Section 188.4 in the counties in which the route provided for in this section lies until June 30, 1962.

No money shall be expended from the allocation make by this section unless and until moneys equal to or in excess of the amount expendable each year from this allocation shall be made available by the Federal Government, in addition to the regular federal aid allocations, for expenditure by the department for the construction of the route provided for in this section, to the end that any sums expended from this allocation shall be matched by like or greater amounts from the Federal Government”

In 1957, Chapter 1911 deleted this LRN. It appears to never have been constructed, nor a sign route number assigned.