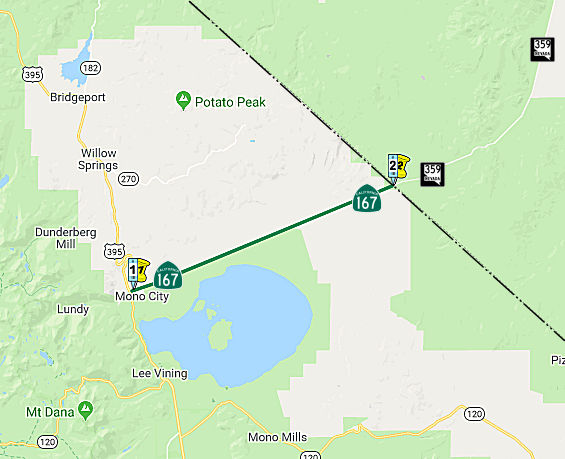 From Route 395 north of Mono Lake to the Nevada state line in the vicinity of the Pole Line Road.

This definition is unchanged from the original 1963 routing.

One of the most arrow-straight highways out there is Route 167, from US 395 to the Nevada border north of Mono Lake. Besides its linearity, a couple of other things about this route are unusual. Originally, it was a spur route of LRN 40, which comprised Route 120 from Route 108 east to the Yosemite Park boundary, and then from the Tioga Pass park boundary to US 395, plus the section from US 395 to US 6 (Benton Jct.). About 1953 or so the "Pole Line" highway was added to the state highway system as an access road into Nevada (and the U.S. ordinance storage facility at Hawthorne, NV), connecting with (now) NV 359. What is unusual is that the Division of Highways, rather than just picking the next number available (in the 200's by that time) for this route, designated it another section of LRN 40 -- as if they were planning to reroute Route 120 onto that route rather than the US 395-to-US 6 section, which featured regular winter closures. Of course, the 1964 renumbering undid such a designation; in their pull-it-out-of-a-hat '64 style, they renumbered it as Route 167. Recently the route has been touted as part of the most efficient Los Angeles-to-Boise route for commercial and recreational traffic -- although it has not been included in the NHS; a STRAHNET route accomplishing the same function diverges from US 395 onto US 6 at Bishop, using that route to NV 360, which functions as a "cutoff" to north US 95, which backtracks into Hawthorne. But there are more services along US 395 between Bishop and the Route 167 intersection; probably the reason the Route 167 alternative has gained popularity for regular drivers between L.A. and the Boise area.
(Source: Scott Parker (SParker) at AAroads, 8/2/2016)

In 1957, Chapter 1911 extended the origin to [LRN 165] (Harbor Freeway): “[LRN 165] in San Pedro Long Beach to Huntington Drive via Long Beach”. It is possible that the segment from Long Beach to San Pedro was previously LRN 231 between 1949 and 1953, before the Federal Government constructed the Seaside Freeway.

In 1958, Chapter 74 added the San Pedro-Terminal Island Bridge: "[LRN 165] in San Pedro to Huntington Drive via Long Beach, and including a bridge with at least four lanes from San Pedro at or near Boschke Slough to Terminal Island"

In 1959, Chapter 1062 extended to LRN 9: "[LRN 165] in San Pedro to Huntington Drive [LRN 9] in Pasadena via Long Beach, and including a bridge with at least four lanes from San Pedro at or near Boschke Slough to Terminal Island"