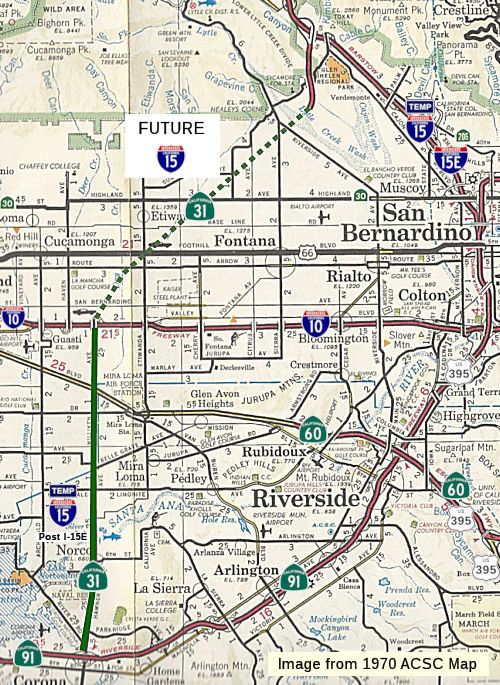 In 1963, this route was defined to run from Route 91 near Corona to Route 15 [now I-215] near Devore, passing near Milliken Avenue at its junction with Route 10.

In 1974, Chapter 537 transferred this segment to Route 15. Hamner Avenue was signed as "Temporary I-15" once I-15 was constructed south to Route 60 in 1980 (it had reached I-10 a year earlier). Prior to that Route 31 signage existed along Hamner as well as its Milliken Ave. extension in eastern Ontario north of there. Route 31 signage was largely removed (except for a few "straggler" signs in Corona and Norco) when the temporary I-15 signage was erected. That temporary signage extended south of Route 91 as well along then-Route 71 to the original 4-lane freeway section from south Corona to north of Lake Elsinore. That segment got actual I-15 signage circa 1979-80. One of the last Route 31 signs was a trailblazer just before the EB 91>NB 31/Temp 15 loop ramp (prior to the interchange's reconstruction as a wide diamond in the late '80's); that sign had been there since first erected back in 1968.
(Source: Scott Parker on AARoads, July 2018)

Some significant history of this route is discussed under I-15. The following is an excerpt:

Sparker on AAroads provided an even more detailed history in a post on 7/12/2016:

It all started with the I-15 extension south to San Diego, part of the 1968 1500-mile Interstate expansion legislation. Originally, the concept was to take I-15 directly south from the original I-10 junction at Colton, continue south on the ridge betwen Reche Canyon and Pigeon Pass, and then descend the mountain near the present east junction of Route 60 and I-215, and then segue onto what was then US 395 south past March AFB and on to San Diego. That concept didn't last long -- just as long as it took to do a detailed survey of the proposed route -- the mountains in that area are basically a pile of unstable compressed sandstone "rocks"; a construction nightmare. A more "flatland" approach was explored to the west, diverging from US 395 between Grand Terrace and Highgrove (both between Colton and Riverside), heading south east of Iowa Avenue, then following the Santa Fe rail line along the base of the mountains -- directly behind UC Riverside -- and merging with Route 60/US 395 (now Route 60/I-215) just north of the present route split in Moreno Valley. You can guess how that went over with the UC Riverside community -- it would have wiped out a whole nest of apartments serving as student housing -- not to mention being across the street from the Chancellor's official residence! By the end of 1969, that option was also kaput.

Early in 1970 District 8 planners came up with an alternate that solved more than a few issues -- the proposed Route 31 freeway, extending north from Corona through eastern Ontario before turning northeast along the base of the San Gabriel mountains to intersect I-15 at Devore, the point where the route started climbing Cajon Pass. Realigning I-15 over this route would cut about 23 miles off the Los Angeles-Las Vegas I-10/I-15 routing by eliminating the "backtracking" route via San Bernardino. And, lo and behold, the south end of the Route 31 freeway continued south of Corona as the Route 71 proposed freeway (actually, about 10 miles of it had been constructed circa 1967 between Corona and Lake Elsinore), which itself merged with US 395 at Murietta, just north of Temecula. While about ten miles longer than the existing I-15/US 395 route through Riverside and Perris, this reroute concept drew not only attention from the local press but also that in L.A. -- virtually all favorable to the idea. By mid-1970 the Division of Highways had decided to strongly pursue the Route 31 option. AASHTO (at that time, without the first "A") concurred, and the matter reached FHWA by the beginning of fall.

At first, FHWA raised an objection to the funding of the former Route 31 section from I-10 north to the existing I-15 at Devore because of the existence of the in-place I-15 through San Bernardino, which had been previously the receipient of chargeable Interstate funds. But a perusal of the records showed that the segment between I-10 and 5th Street in San Bernardino had commenced construction in early 1956 -- almost a year before Interstate funds were first disbursed; only the segment north of there was actually part of chargeable construction. Negotiations commenced, and an agreement was finally made near the end of 1970 whereby California would waive any rights to Interstate maintenance or reconstruction funds for the original I-15 segment between I-10 and Devore in exchange for full funding of the entire Route 31/Route 71 corridor as the realigned I-15. Once that agreement was finalized, the Division accelerated construction of the Devore freeway-to-freeway interchange, already in progress as part of the I-15 Cajon realignment, along with the first couple of miles of the new (then) Route 31 alignment, which opened by the spring of 1971 (this was pre-STIP days, when the Division could do such things without much in the way of outside interference).

However, as soon as the dust had settled on the reroute, the cities of San Bernardino and Riverside voiced concerns that this new routing, which completely bypassed their city centers, would have a negative effect on their development plans. Together, these cities had devised a plan whereby the new western route via Corona and Ontario would become I-15W, while US 395 would be renumbered I-15E, regardless of the actual non-Interstate status of the latter route -- but keeping an Interstate route through their midst. AASHTO quickly shot down the full E/W split, but reserved the notion of at least keeping US 395 through San Bernardino signed as an Interstate until the Ontario-Devore segment of the new alignment could be completed. And as this was several years prior to the decision to eliminate suffixed Interstate numbers, they approved the signage of the I-10 to Devore segment as I-15E (the Division had the entirety of US 395 from Murietta to Devore redesignated as an unsigned Route 194, a number previously decommissioned elsewhere). Initially, I-15E was intended to be a purely temporary designation -- but that it existed at all (signed as such in late 1972) placated the city of San Bernardino for the time being.

However, the city of Riverside did not hesitate to voice their objections to being left out of the Interstate network. They "lucked out", however due to inadvertently good timing: the Nixonian "block grant" legislation, passed in early 1973 prior to that administration's functional crippling in the wake of the Watergate scandal, introduced the concept of "chargeable/nonchargeable" Interstate delineation. Now the 15E concept could, with AASHTO/FHWA consent, be extended south along US 395, rejoining the new I-15 at Murietta, as a nonchargeable route. With a major push from the local Congressional delegation, this was done by the spring of 1974. I-15E was signed in place of US 395 as far south as the Route 60 split at Moreno Valley; the remainder of the route south to Murietta was signed, by mid-1975, as "Temporary I-15E" and south of the Route 71 merge at Murietta as "Temporary I-15". This configuration lasted for a few years until the decision to eliminate suffixes was made.

Renumbering of the completed and uncompleted portions of I-15E was proposed circa 1979; Caltrans made one of their rare appropriate renumbering decisions: to reinstate the number 215, which was an urban surface-street connector in Pomona before it was deleted from the state highway system in 1965. AASHTO and FHWA vetted the 15E to 215 change by 1981; the renumbering in the field took place in 1982. Although some sections were technically substandard, the route was by that time mostly full freeway; a short segment between Sun City and Perris still featured a couple of at-grade crossing roads, while the segment from Perris to Route 60 was still a divided facility with numerous at-grade and/or signalized intersections [Ed: I remember this segment from numerous trips to OERM in Perris]. The "temporary" designation concept had been dropped by Caltrans at that point; the section between the Murietta I-15 divergence and Route 60 was (IMO somewhat absurdly) signed as "TO I-215" northbound, and as Route 215, complete with green shields, southbound. This unwieldly situation persisted until the two sections featuring cross traffic were upgraded to full freeway in 1995. The in-city Riverside segment of I-215 featured one of the most underpowered Interstate "Turn Off To Stay On" (TOTSO) interchanges (in both directions, including a 25mph loop southbound) until 2004, when the southbound I-215 2-lane flyover was completed; the northbound outside ramp still shrinks to a single lane before merging with lanes continuing from the terminating Route 91. It's still a TOTSO -- but not quite as obnoxious as before!
(Source: Sparker @ AAroads, "Re: Interstate 15E signage in San Bernardino and Riverside Counties?", 7/12/2016)

Route 31 was not defined as part of the original set of state signed routes. It is unclear what, if any, routing was signed as Route 31 before 1964.

The route that would become LRN 31 was first defined in the 1916 Second Bond Act as "an extension of the San Bernardino county state highway lateral to Barstow in San Bernardino County by the most direct and practical route..." (i.e., US 66 to Barstow). In 1925, the route was extended to Nevada by Chapter 369, which authorized and directed "the California highway commission to acquire necessary rights of way, and to construct and maintain a highway, which is hereby declared to be a state highway, extending from Barstow...to a point...on the boundary line between the state of California and the state of Nevada...which said highway is commonly known and referred to as the Arrowhead trail.". In 1933, the route was extended again with a segment from "[LRN 26] near Colton to [LRN 9] near San Bernardino via Mt. Vernon Ave".

This was primary state highway from San Bernardino to the Nevada State Line.

In 1957, Chapter 1911 removed the branch on Mt. Vernon Avenue, which appears to have been signed as US 395/US 91. That segment was subsequently rerouted onto a new alignment (presumably the eventual I-15 alignment).

Signage on the route was as follows: