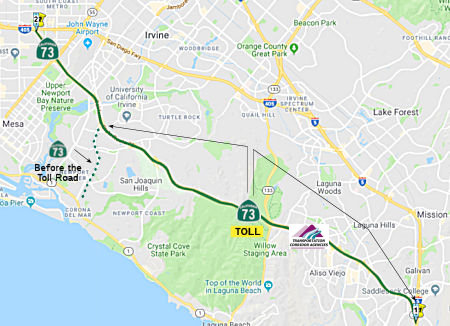 From Route 5 near San Juan Capistrano to Route 405 via the San Joaquin Hills.

In 1983, Chapter 849 changed the origin of the route and modified the routing to be "Route 5 near San Juan Capistrano to Route 405 via the San Joaquin Hills." It also noted that "MacArthur Boulevard from Route 1 near Corona del Mar to San Diego Creek in Irvine shall cease to be a state highway when the Route 73 freeway as described above is completed." This reflected the planned construction of the San Joaquin Hills Toll Road. A 1986 map does show the proposed tollway.

In 2003, Chapter 525 removed the text about the former portion of the route.

Much of the present routing was defined post-1964. The portion of the current routing from near UC Irvine to I-405 was LRN 184, defined in 1933 (as was the remainder of the since deleted 1963 routing)

In 1960, it was noted that LRN 184 needed realignment to connect to the construction of the San Diego Freeway (I-405). The Main Street Extension of LRN 184 had been adopted as what was considered once a "freeway" by the California Highway Commission on January 26th, 1940 which led to the corridor being retained as part of the Freeways and Expressway System.
(Source: Gribblenation Blog (Tom Fearer), "California State Route 73", October 2021)

In March 2016, the CTC allocated additional funds for a project on Route 73 in Laguna Beach in Orange County at the northbound collector/distributor from the El Toro Road on-ramp to the Laguna Canyon Road (Route 133) offramp (~ ORA 16.356 to ORA 16.796). The project will widen the ramp and modify signals.

The 2020 Capital Improvement Plan for the Transportation Corridor includes a study for the Glenwood Interchange Project, Phase 2 (~ ORA 15.258), which completes the interchange movements with ramps to and from Route 73 to the south. The future Phase 3 is an expansion and reconfguration of the northbound on-ramp from Glenwood and provides for more intersection and mainline capacity by braiding the northbound on-ramp with the El Toro Road off-ramp.
(Source: 2020 Fiscal Capital Improvement Plan, 6/13/2019)

In September 2011, it was reported that a request by the California Department of Transportation (Caltrans) to sign a freeway agreement related to the road that connects Aliso Viejo to Newport Beach was delayed at the Sept. 6, 2011 Laguna Beach City Council meeting (~ ORA 16.356 to ORA 16.796). Laguna Beach officials opposed construction of the roadway and much of the sentiment against it remains. Route 73 was inherited by Caltrans from the Transportation Corridor Agency, which constructed it, but the standard freeway agreement was overlooked in the process, according to a Laguna Beach staff report. Now, the toll road is being termed a freeway because it is under Caltrans control. The proposed agreement imposes no future obligations on the city, according to the analysis by the city staff. However, there were had questions about references in the agreement to obligations for future funding and construction to be dealt with in a separate cooperative agreement, as well as the acquisition of city streets, frontage roads and other local roads required for the construction, reconstruction or alteration of the toll road. Further, the agreement states that the city agreed to the construction that traverses through the city's jurisdiction from the Aliso Viejo city limits to the Newport Beach city limits. In fact, Laguna Beach did not agree to either the construction or the design of the toll road and was the only city through which Route 73 ran that was not a member of the TCA. The corridor agency and Caltrans signed an agreement dated April 7, 1995, that said Caltrans would assume maintenance of Route 73 when it was completed. In May of 1996, the California Transportation Commission declared the toll road a "freeway."
(Source: LA Times)

In May 2018, the CTC approved for future consideration of funding the following project for which a Mitigated Negative Declaration (MND) has been completed: Route 73 in Orange County. Construct roadway improvements on Route 73 and MacArthur Boulevard in the city of Newport Beach. (PPNO 4096R) (12-Ora-73, PM 23.95/24.15) This project is located on Route 73 in the city of Newport Beach in Orange County. The project proposes to widen the Route 73 southbound off-ramp to MacArthur Boulevard from one lane to two lanes. Also included in the proposed project are upgrading bridge rail, construction of retaining walls and/or guardrails, installation of overhead traffic signals, drainage improvements, and modification of lighting, ramp metering and the existing overhead signage. The project proposes to reduce the higher than average number of collisions on the off-ramp. The proposed project is estimated to cost $6.5 million in capital construction. The project is fully funded and is currently programmed in the 2018 SHOPP for $11.4 million which includes Construction (capital and support) and Right- of-Way (capital and support). The project is estimated to begin construction in 2020. The scope, as described for the preferred alternative, is consistent with the project scope programmed by the Commission in the 2016 and 2018 SHOPP.
(Source: CTC Agenda, May 2018 Agenda Item 2.2c(1))

The 2020 Capital Improvement Plan for the Transportation Corridor includes a study for  study the option of adding one HOV lane in each direction from MacArthur Boulevard (~ ORA 23.817) to I-405 (~ ORA R27.902R). TCA as a stakeholder will coordinate with OCTA on this study including the potential option to add managed lanes on Route 73 between Bison Avenue (~ ORA 23.423) and Bear Street (~ ORA R27.3) with a tie-in to the Route 73/I-405 Express Connector to provide managed lane continuity between the 73 Toll Road and the 405 Express Lanes.
(Source: 2020 Fiscal Capital Improvement Plan, 6/13/2019)

In August 2005, the CTC considered relinquishment of right of way in the City of Irvine, at University Drive South, consisting of reconstructed and relocated city streets (~ ORA 24.325).

In July 2007, the CTC relinquished right of way in the city of Costa Mesa, from 0.4 mile North of Red Hill Avenue (~ ORA R26.093) to the South City Limit (~ ORA R25.829), consisting of reconstructed and relocated city streets. The City, by relinquishment cooperative agreement dated June 4, 2007, waived the 90-day notice requirement and agreed to accept title upon relinquishment by the State.

*TRANSCORR* The portion of this freeway between I-5 and MacArthur Blvd (~ ORA 10.579 to ORA 23.79) is named the "San Joaquin Hills Transportation Corridor". It is named because it traverse the San Jaoquin Hills. San Joaquin is the Spanish pronunciation of Saint Joachim - the Father of the Virgin Mary.
(Image source: AARoads)

The pre-1983 routing (from Route 1 to Route 405 along MacArthur Blvd) was named the "Veterans Memorial Freeway". It was named by Senate Concurrent Resolution 2 in 1967. This segment is no longer in the state highway system.

The portion of this freeway between MacArthur Blvd and Route 405 (~ ORA 23.79 to ORA R27.735) was named by the "Corona Del Mar Freeway" by the local Caltrans District. The first freeway segment opened in 1977; the last segment in 1996. The named segment traverses the community of Corona Del Mar.

This highway is freeway (no toll) between MacArthur Blvd and I-405.

This highway is a toll road between MacArthur Blvd and I-5. The first segment of the tollway, running from Greenfield Drive in Laguna Niguel to Laguna Canyon road, opened on 24 July 1996. The reminder of the tollway (between Jamboree Road and Laguna Canyon Road (Route 133) and between Greenfield Drive and I-5, opened on 21 November 1996. There are plans to merge the operation of this route with the Foothill Toll Roads such as Route 241.

The route that would become LRN 73 was first defined in 1931 by Chapter 82 as the route from Alturas to Oregon State Line near New Pine Creek. In 1933, it was extended from [LRN 28] at Alturas to [LRN 29]. In 1935, it was codified into the highway code as the following route:

This definition remained unchanged until the 1963 renumbering. The route was (and is) signed as US 395.