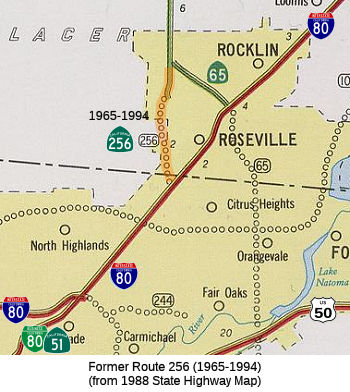 The EIR for the Roseville Bypass provides some information as to why Route 256 was never constructed, as was eventually deleted: Route 256, a once adopted route for a west-side bypass of Roseville was rescinded by the California Transportation Commission because of cost and difficulty of crossing the Southern Pacific Switchyard. The route adoption was rescinded in 1976.
(Source: Route 65 Roseville Bypass Final EIR)