From Route 10 near Whitewater to the Arizona state line near Earp via Morongo Valley, the vicinity of Yucca Valley, Twentynine Palms, Rice, and Vidal Junction. 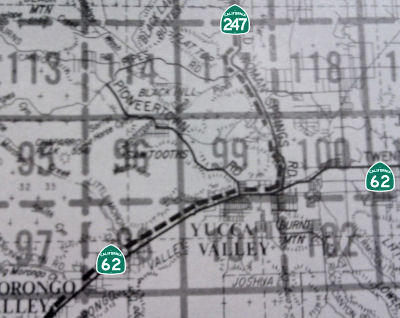 As defined in 1963, Route 62 was the route from "Route 10 near White Water to Utah Trail Road in the town of Twentynine Palms via Morongo Valley and the vicinity of Yucca Valley."

In 1970, Chapter 1473 extended the route to the Arizona state line near Earp via Morongo Valley, the vicinity of Yucca Valley, Twentynine Palms, Rice, and Vidal Junction.

This route was originally planned as freeway from Route 10 to Route 247, where it would have connected to the Old Woman Springs Freeway and continued to Route 18.

Route 62 begins at I-10 near Whitewater and ends east of Earp at the Arizona state line. Generally, an east-west route, it parallels I-10 (I-10 is to the south). Near the state line, Route 62 joins with Arizona 95, a north-south route. Route 62 is a 4-lane divided expressway from the junction with I-10 to 0.8 mile east of the Riverside/ San Bernardino County line. From 0.8 mile east of the Riverside/San Bernardino County line to Sherwood Road immediately east of Yucca Valley, Route 62 is a four-lane divided conventional highway. From Sherwood Road to Adobe Road, in Twentynine Palms, Route 62 is a four-lane undivided conventional highway. From Adobe Road to the Arizona state line, Route 62 is a two-lane conventional highway. Route 62 traverses unincorporated portions of northern Riverside County and southern San Bernardino County. The route serves the unincorporated communities of Morongo Valley, Joshua Tree and Earp, the Town of Yucca Valley, the City of Twentynine Palms, and the United States Marine Corps Air/Ground Combat Training Center in Twentynine Palms. Route 62 is 151.9 miles in length and lies entirely within Caltrans District 8 jurisdiction.

In April 2021, it was reported that a road construction project set for more than 20 miles of Route 62 in Riverside and San Bernardino counties was starting. The $48 million project will see a new layer of pavement placed on two major segments of Highway 62. The first is from Indian Canyon Drive near Desert Hot Springs (~ RIV R6.468) to roughly Yucca Mesa Road in Yucca Valley (~ SBD 15.135). The work will pick up again in Twentynine Palms, from Bermuda Avenue (~ SBD 28.809) to near Utah Trail (~ SBD 34.23). Work is set to wrap up in the summer of 2023. Emily Leinen of Caltrans said the skipped section in Joshua Tree is expected to be part of a future project, but did not elaborate. Along with new pavement, the thoroughfare will be getting new raised curb medians, new stretches of sidewalks and reconstructed curb ramps compliant with the Americans With Disabilities Act. New road striping and signage are also in the plans. Certain traffic signals will also be upgraded with new pedestrian-friendly improvements.
(Source: Desert Sun, 4/2/2021)

TCRP Project #129 will add traffic and pedestrian safety and utility undergrounding projects in the Route 62 right of way. In April 2008, the Town of Yucca Valley requested amending the project to redistribute $600,000 in TCRP funds from Construction to Environmental (PA&ED) and to update the project schedule and funding plan. By constructing safety improvements and utility undergrounding, this project will reduce the accident rate and provide safety improvements for pedestrians and motorists along Route 62 between La Honda Way (~ SBD 9.627) and Dumosa Avenue (~ SBD 12.19) in the town of Yucca Valley. Other project improvements include sidewalk construction, associated drainage, and raised medians to prevent unauthorized left turn movements. Eliminating accidents and left turns will result in reduced traffic congestion on Route 62. The Environmental (PA&ED) work began in May 2002. However, work on the project was suspended due to uncertainties with the project funding. When work resumed, it was determined that the previous traffic studies and other analysis had become outdated and would need to be updated. The project is now scheduled for construction in FY 2009/2010. The PA&ED was completed in February 2009, with $298,000 in TCRP savings. The Plans, Specification, and Estimates (PS&E) started in November 2009. The project has been under development for many years. Based upon a 2010 update to the project costs, the PS&E has increased from $240,000 to $538,000. This shortfall was covered in September 2010 by reprogramming $298,000 TCRP savings from PA&ED.

In January 2013, the CTC authorized $778,000 to the Town of Yucca Valley for Route 62 Median and Sidewalk Improvements. This project, in the town of Yucca Valley, on Route 62 from La Honda Way to Dumosa Avenue will provide sidewalks and install raised medians.

In August 2017, it was reported that Caltrans announced the completion of a project in Joshua Tree (~ SBD 18.305) that actively incorporates complete streets concepts, designed to accommodate all users. The project on Route 62 in Joshua Tree used funds from a current construction project to restripe the downtown section of Joshua Tree with bike lanes and diagonal parking in order to more safely move vehicles, pedestrians and bicyclists through the downtown business district. The majority of Route 62 is a four-lane highway with two lanes in each direction with approximately eight foot shoulders. The section of Route 62 through downtown Joshua Tree has outside shoulders that extend over forty feet—space now being used to stripe out areas to park, add bike lanes and create more controlled lanes. The striping improvements will make it easier and safer for vehicles to park, exit the highway and prevent illegal passing. It will also provide better access for bicyclists and enhance safety for all users of the downtown area.
(Source: Palm Desert Patch, 8/18/2017)

In April 2018, Caltrans posted a draft Initial Study and Proposed MND regarding the Route 62 Widen Shoulders and Install Rumble Strips project. This covers three distinct segments of Route 62: 08-SBD-62 (PM 41.0/41.5 AND 60.6/61.1), and DISTRICT 08-RIV-62 (PM 81.6/82.2) [Note: Route 62 has two segments in RIV: 0.0-9.237 near Desert Hot Springs, and another segment starting at ~ RIV 79.525 (continuing numbering from SBD) and going to RIV 90.202 (and then continuing number back into SBD)]. The project proposes to widen the outside shoulder of Route 62 to eight feet in both directions and install ground-in rumble strips on the centerline and on the outside shoulders. The proposed project is located in a rural setting on Route 62 at post miles (PM) 41 to 41.5 (Segment 1) and PM 60.6 to 61.1 (Segment 2) within San Bernardino County, and from PM 81.6 to 82.2 (Segment 3) in Riverside County. The project is within the Cadiz Valley Southeast, Valley Mountain, and Clarks Pass 7.5 minute U.S. Geological Survey (USGS) topographic quadrangles. Within the project limits, Route 62 is a two-lane conventional highway that traverses unincorporated portion of southern San Bernardino County and northern Riverside County. Existing shoulder widths for the segment of the route within the project vicinities vary from zero to four feet wide. The existing shoulder widths do not meet current Caltrans Highway Design Manual Standards. The posted speed limit along these segments of Route 62 is 50 to 55 miles per hour (mph). The highway is on relatively flat terrain and is part of the Terminal Access Route to the National Network for Surface Transportation Assistance Act (STAA) trucks. The section of Route 62 experiences a higher than average incidence of cross-centerline accidents.
(Source: Route 62 Safety Improvments Initial Study and Proposed MND, April 2018)

In August 2018, the CTC approved for future consideration of funding the following project for which a Mitigated Negative Declaration (MND) has been completed: Route 62 in San Bernardino and Riverside Counties (08-SBd-62, PM 41.04/41.5 & 60.6/61.1, 08-Riv-62, PM 81.6/82.2). Construct roadway improvements on a portion of Route 62 in San Bernardino and Riverside Counties. (PPNO 0225K) This project is located on Route 62 in San Bernardino and Riverside Counties. This project consists of three segments of project limits and proposes to widen shoulders and install ground-in rumble strips on Route 62. The purpose of the proposed project is to reduce the number and severity of cross-centerline collisions on Route 62. The proposed project is estimated to cost $5.03 million and is programmed in the 2016 SHOPP program for approximately $6.2 million. Construction is estimated to begin in funding Fiscal Year 2018-19. The scope, as described for the preferred alternative, is consistent with the project scope programmed by the Commission in the 2016 SHOPP.
(Source: August 2018 CTC Agenda Item 2.2c(1))

In December 2009, the CTC approved for future funding a project that will construct a non-capacity-increasing bridge to replace the existing Colorado River Bridge near the city of Earp (~ SBD 142.718) to correct scour deficiencies. The project is fully funded in the 2008 State Highway Operation and Protection Program. Total estimated cost is $29,627,000, capital and support. Construction is estimated to begin in Fiscal Year 2009-10.

The portion of this route from 5.4 miles west to 4.6 miles east of the intersection with Route 177 in Riverside County (~ RIV 79.208 to RIV 89.208) is named the "CHP Officer Daniel J. Muehlhausen Memorial Highway". Named in honor of California Highway Patrol Officer Daniel J. Muehlhausen, badge number 13933, who was killed in the line of duty on June 1, 1997. Officer Muehlhausen was struck by an errant driver while en route to assist a disabled motorist on eastbound Route 62 east of Route 177, and succumbed to his injuries as a result of the this collision. He was born on August 8, 1966, in Hemet, California. He lived in Riverside, California where he attended and graduated from Notre Dame High School. Prior to beginning his career with the California Highway Patrol, Daniel J. Muehlhausen graduated from the University of California, Riverside, with a degree in Philosophy. He joined the CHP on October 17, 1994. After successfully completing his academy training on April 20, 1995, he reported to the Indio area, where he made significant contributions to traffic safety and to the motoring public while assigned to the Indio office of the California Highway Patrol. He served two years as a sworn peace officer for the California Highway Patrol and was known by his fellow officers for his dedication to the department and to the protection of the citizens of this state. Named by Assembly Concurrent Resolution 29, Chaptered 7/8/2003, Chapter 90.
(Image sources: Heart Trek USA, CHP Memorial Page)

The portion of Route 62 from its junction with I-10 to Adobe Road in Twenty-nine Palms is designated as a Blue Star Memorial Highway. Designated by Assembly Concurrent Resolution 180, July 16, 2004, Chapter 127.

The route that would become LRN 62 was first defined in the 1919 Third Bond Act was the route from Azuza to Pine Flats in San Gabriel Canyon. In 1933, the route was extended from Huntington Beach-Whitter Road near Buena Park to [LRN 9] near Azuza. This was codified in 1935 into the highway code as:

It was quickly amended by Chapter 626 in 1935 to split the first segment (the reason why is unclear):