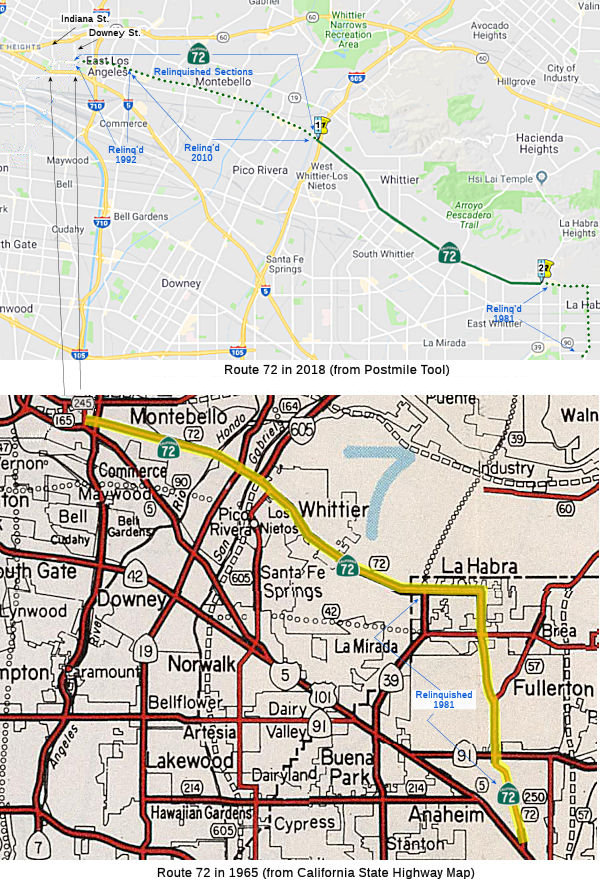 (a) This will cease to be a state highway when the Route 90 freeway is completed from Route 5 to Route 39.

The Montebello Relinquishment was considered by the CTC in September 2000.

The portion of Route 72 in Pico Rivera was up for relinquishment in July 2005.

In 2019, AB 1810 authorized relinquishment in the City of Whittier and the County of Los Angeles. Note that this will only leave the portion of the route in the City of La Habra, between Route 39 and Valley Home Avenue.

In 1963, Chapter 1372 changed the terminus of the route to be "Downey Road near the City of Los Angeles." This was just a rewording reflecting the 1965 deletion of Route 245, which was a temporary state highway during construction of Route 5 running from Route 5 near Los Angeles to Route 60 at the intersection of Downey Road. The 1965 act also added some relinquishment conditions:

So clearly the intent was for Route 72 to be a temporary route while the freeway system was being built out.

In 1981, Chapter 292 truncated the route to be "Route 39 to Downey Road near the City of Los Angeles." This eliminated the portion between Route 5 and Route 39, reflecting the completion of the Route 57 freeway. The second condition ("Route 72 shall cease to be a state highway when Route 90 freeway is completed from Route 5 to Route 39.") remained. As for the former portions of Route 72: the portion from Route 5 to Harbor Blvd [Route 39] was relinquished from the state highway system, and the portion from Harbor Blvd [Route 39] to Route 39 was transferred to Route 39.

In 1988, Chapter 106 added an additional condition: “(c) Notwithstanding subdivision (a), the portion of Route 72 from Route 605 to Atlantic Boulevard shall cease to be a state highway when the County of Los Angeles, the City of Montebello, and the City of Pico Rivera complete the reconstruction of their respective portions of Whittier Boulevard approximately between these two limits.”

In 1992, Chapter 1243 changed the route to "Route 39 to Atlantic Boulevard near the City of Los Angeles". This reflected the completion of subsection (b), eliminated Atlantic to Downey Road.

At one time, there was a permit that allowed the closure of this route to all vehicular traffic, except emergency traffic, between Eastern and Atlantic Blvd on Friday, Saturday, and Sundy nights between 9:30 pm and 5:00 am. This permit was granted to reduce the "cruising" that was occuring on the route on those evenings. This segment is no longer part of the routing.

In 2010, Chapter 421 (SB 1318, 9/29/10) changed the terminus of the definition: "to to Route 605 in Whittier". Appropriate adjustments were made in subsection (b) as well. It used to read: "(b) Notwithstanding subdivision (a), any portion of Route 72 from Route 605 to Atlantic Boulevard ceases to be a state highway when the County of Los Angeles, the City of Montebello, and the City of Pico Rivera complete the reconstruction of their respective portions of Whittier Boulevard approximately between these two limits."

(c) The commission may relinquish to the City of Whittier and the County of Los Angeles the portion of Route 72 within their respective jurisdictional limits, upon terms and conditions the commission finds to be in the best interests of the state, if the department and the city and the county enter into an agreement providing for that relinquishment.

(2) On and after the effective date of the relinquishment, all of the following shall occur:

(A) Any portion of Route 72 relinquished pursuant to this subdivision shall cease to be a state highway.

(B) Any portion of Route 72 relinquished pursuant to this subdivision shall be ineligible for future adoption under Section 81.

(C) For any portion of Route 72 relinquished pursuant to this subdivision, the City of Whittier and the County of Los Angeles shall maintain signs within their respective jurisdictional limits directing motorists to the continuation of Route 72.

If the portion authorized for relinquishment in 2019 is relinquished, the only remaining adopted portion of Route 72 would be between Route 39 and Valley Home Avenue.

The route currently is along Whittier Blvd.

Historically, this route is close to the original "El Camino Real" (The Kings Road). The original 1964 route (from I-5 to Route 39) has officially been designated as "El Camino Real by Assembly Bill 1769, Chapter 1569, in 1959. The roads that connect the Route 39 terminus with I-5 are also part of El Camino Real.

In November 1957, the designation I-72 was proposed for what is now I-580. This was part of an approach to have I-5 numbered as I-11, and I-80 as I-76, and included a lot of single interstate numbers for routes that are now loop or spur routes (3di). The numbering was rejected by AASHTO in favor of I-5W.

The route that would become LRN 72 was first defined in 1931 by Chapter 82 as the route from Weed to California-Oregon State Line, near Calor. In 1935, it was codified into the highway code as the following route:

“[LRN 3] at Weed to the Oregon State Line near Calor”

This definition remained unchanged until the 1963 renumbering. The route was (and is) signed as US 97.