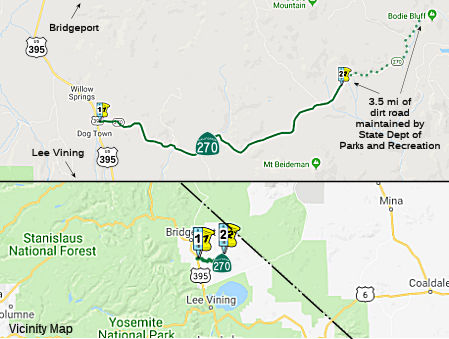 From Route 395 south of Bridgeport to Bodie State Historic Park.

In July 2017, Tom Fearer (Max Rockatansky) on AARoads noted that the dirt segment of Bodie Road from the end of Route 270 to Bodie is in extra bad shape. The wash boarding is very heavy and doesn't really clear up until the gate of the park. Max also provided some more details on the history of the route: All of Bodie Road shows as county maintained to NV3C at the state line on the 1970 Map with the planned state highway alignment shown on the 1975 State Highway Map. Between 1979 and 1981 CA 270 appears to have been completed for the first 10 of 13 adopted miles to Bodie. Max also noted that it appears the recommendation to delete the dirt portion from the state highway system occurred, as there is an "END" sign where the asphalt ends. Bodie itself it was established as a small mining camp in 1859 after the discovery of gold in the Bodie Hills. Large deposits were found in 1876 and 1878 which led to a population swell to at least 5,000 people in Bodie by 1879. The Bodie and Benton Railroad was a 32 mile line built from Mono Mills north to Bodie to transport lumber. The line followed the eastern shore of Mono Lake, crossed what is now CA 167, and ascended what is now Cottonwood Canyon Road to Bodie. The population decline in Bodie started in the 1880s and progressed through the early 20th century to 1940 when the Census on only 40 residents left in the town. The Bodie and Benton Railroad was dismantled in 1918 when there might have been just a little over 100 people left in Bodie. Post Office Service stopped in Bodie in 1942 and there was only three people recorded living in the town by 1943. The town of Bodie was made into a State Park in 1962 when a little under 200 of the claimed original 2,000 buildings were left standings. The bypass route of Bodie which goes to the State Park parking lot is a modern construction given the higher grade gravel that is present on it. To reach Aurora in Nevada you would need to enter Bodie via Main Street and follow it out of town where Bodie Road would resume. Bodie Road continues another 9-10 miles to NV 3C which is about another 3-4 miles away from the Aurora Ghost town. NV 3C continues north to NV 208 south of Yerington which would have been NV 3 prior to the state highway renumbering. NV 3C isn't part of the state highway system today and never appears to have been maintained beyond the county level. According to what I was told last year you'll need a high clearance vehicle to get through NV 3C to NV 208 given that that a bridge failed just over the Nevada State Line. Bodie-Masonic Road traverses north out of Bodie to the ghost town called Masonic. From Masonic, Route 182 can be reached via Masonic Road by traveling southwest. Aside from that there is a couple more mining ghost town sites in the general area around the Bodie Hills, but nothing that appears to have been much more than a collection of shacks.
(Source (with great images): Tom Fearer (Max Rockatansky) on AARoads, July 2017)