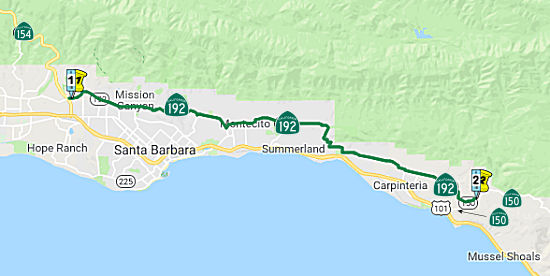 From Route 154 near Santa Barbara to Route 150 near the Ventura-Santa Barbara county line via Foothill Boulevard.

In January 2018, the CTC approved for future consideration of funding the following project for which a Mitigated Negative Declaration (MND) has been completed: Route 192 (05-SB-192, PM 15.4/15.6) in Santa Barbara County. Replace existing bridge on Route 192 near the city of Carpinteria. (PPNO 0335). The project is located northwest of the city of Carpinteria in Santa Barbara County. The project proposes to replace the Arroyo Parida Creek Bridge, also known as the Arroyo Paredon Creek Bridge (Bridge No. 51-0113) on SR 192. The project will replace the current bridge with reinforced concrete slab, concrete bridge rail, wider lanes and shoulders, correct alignment, upgraded culvert crossings, and construct a retaining wall. The project is fully funded and programmed in the 2016 SHOPP for an estimated total $15 million which includes Construction (capital and support) and Right-of-Way (capital and support). Construction is estimated to begin in Fiscal Year 2019-20. The scope, as described for the preferred alternative, is consistent with the project scope programmed by the Commission in the 2016 SHOPP.
(Source: CTC Agenda, January 2018, Agenda Item 2.2c(1))

In February 2018, it was reported that there will be long-term closures for several bridges and one-way traffic control for others that were damaged in the Jan. 9, 2018 mudslides and debris flows. There are three Route 192/East Valley Road bridges that will be completely replaced, so they are closed to through traffic (except emergency and utility vehicles) until further notice. They include the Montecito Creek bridge at East Valley Road near Parra Grande Lane; the Romero Creek bridge at East Valley Road near Ortega Ridge Road; and the Toro Canyon bridge near Toro Canyon Road. The long-term plan is to completely close each bridge with barricades and locked gates, according to Caltrans. Other bridges have one-way traffic control with stop signs, including the San Ysidro Creek bridge at East Valley and Randall roads; Toro Creek (near Ladera Lane); and Arroyo Parida Creek near Carpinteria. The Arroyo Parida crossing has had one-way traffic control for a while, and was already slated to be replaced. There are temporary bridge guardrails on the San Ysidro and Toro creek bridges, according to Caltrans, since railings were knocked away by the force of the rocks, mud and debris during the storm. Santa Barbara County has two damaged bridges – one is gone, and one is closed – and a destroyed creek crossing on East Mountain Drive. The bridge on East Mountain Drive near San Ysidro Ranch is completely gone, and the Ashley Road bridge is closed after being severely damaged in the storm.
(Source: SB Noozhawk, 1/29/2018)

In Mid-February 2018, there was an update on the Route 192 bridges. Route 192 is closed between Sycamore Canyon/Camino Viejo Road near Santa Barbara and Cravens Lane near Carpinteria, and four bridges along the highway were heavily damaged in the storm. Caltrans contracted with Security Paving Company, of Sylmar, to rebuild the Montecito Creek, Romero Creek and Toro Canyon bridges for $20 million. The damaged Arroyo Parida Creek bridge, which was already scheduled to be replaced, will also be demolished and rebuilt. The four bridges will be closed to all vehicles (except emergency and utility vehicles) with barricades and locked gates, for several months, and then demolished, Caltrans said. There is no timeline yet for how long it will take to design and rebuild the bridges according to a Caltrans District 5 spokescritter.
(Source: SB Noozhawk, 2/12/2018)

In May 2018, it was reported that Caltrans is continuing with plans to rebuild and repair six bridges along Route 192 following debris flows and flooding in the Montecito area. This major construction effort will include rebuilding Montecito Creek (PM 8.12), Romero Canyon Creek (PM 10.92), Toro Canyon (PM 12.49) and the Arroyo Paredon Creek (PM 15.50) bridges. The demolition of these bridges will begin Monday, May 7 and continue through early June. Caltrans will begin with removal of the Toro Canyon Bridge, followed by Romero Canyon Creek, Arroyo Paredon and Montecito Creek Bridges. Caltrans is nearing completion on the design of the new bridges and is moving toward construction at an accelerated pace. The demolition process follows the completion of the relocation and repair of utility lines by Southern California Edison and the Southern California Gas Companies. Caltrans will also demolish the bridge rails on the San Ysidro Creek (PM 9.6) and Toro Creek (PM 12.14) bridges this June. Both of these bridges remain open under one-way traffic control via stop and yield signs which will remain in place until these repairs are complete.
(Source: Edhat Santa Barbara, 5/4/2018)

In January 2019, it was reported that Caltrans has re-opened the Romero Canyon Creek Bridge (PM 10.92) and the Toro Canyon Creek Bridge (PM 12.49) on Route 192 as of Wednesday, Jan. 30, at 3 p.m. These bridges were rebuilt following the debris flows and flooding in January 2018. Motorists will encounter protective barrier on these bridges until the bridge rails have been installed. Motorists should drive safely in these areas.
(Source: SB Noozhawk, 1/30/2019)

In April 2019, it was reported that installation of the roadway deck on the Montecito Creek Bridge on Route 192 in Montecito is the most visible progress in the effort to repair and rebuild spans damaged or destroyed by the Jan. 9, 2018, debris flows. Crews have begun installing the prefabricated concrete sections of the deck for the bridge at the base of Parra Grande Lane, according to Caltrans. The bridge is expected to re-open to traffic with some restrictions by July 2019. Elsewhere in Montecito, new rails have been installed on the upstream side of the Toro Canyon Bridge, and work has shifted to the downstream side. The span is open with one-way reversing traffic control, and lanes of the bridge are expected to re-open in June 2019. Utility work is expected to be completed by the middle of this month on the Arroyo Paradon Bridge, with final paving scheduled for early May. This bridge is expected to re-open to the public in mid-May 2019.
(Source: SB Noozhawk, 4/8/2019)

In November 2019, Caltrans District 5 reported that nearly two years after the devasting mudslide/flood in Montecito, Route 192 was OPEN to through traffic all the way to Carpinteria. The just completed rebuilding the Montecito Creek Bridge, last of six bridges severely damaged by the disaster.
(Source: Caltrans District 5 on FB, 11/22/2019)