From Route 101 near Ukiah easterly to East Side Road in Talmage.

In 1963, this was defined as "Route 101 near Ukiah to the west line of the grounds of the Mendocino State Hospital."

In 1974, the former grounds of the Mendocino State Hospital were sold to the Dharma Realm Buddhist Association is its headquarters and named the City of Ten Thousand Buddhas. The hospital facility consisted of over seventy large buildings, over two thousand rooms of various sizes, three gymnasiums, a fire station, a swimming pool, a refuse incinerator, fire hydrants, and various other facilities. A paved road wound its way through the complex, lined with tall street lamps and trees over a hundred years old. The connections for electricity and pipes for water, heating, and air conditioning were all underground. Both the architectural design and the materials used for the buildings were state of the art. The heating and air conditioning were centrally controlled. The entire complex could accomodate over 20,000 residents. The grounds were sold due to the drought in the 1970s, when the wells dried up.
(Source: City of Ten Thousand Buddahs, History and Background)

In 1981, Chapter 292 changed the definition to "Route 101 near Ukiah easterly to East Side Road in Talmadge the west line of the grounds of the Mendocino State Hospital".

Although this is a short route that no longer goes to a state institution, it is still on the state books for the same reason that the highly truncated Route 275 and Route 283 are: maintenance of a bridge; in this instance, one over the Russian River. It's in a relatively flood-prone area, and Mendocino County, in which the facility resides, would rather not assume maintenance of the bridge, which provides access from Ukiah to not only the Buddhist retreat that's on the former state hospital grounds but also residences and farms (particularly vineyards; this is within the northern reaches of "wine country") on the east bank of the river. So it remains an unsigned state highway; even during the late '60's push to sign anything under state maintenance, this particular short highway seems to have escaped unshielded!
(Source: Scott Parker (SParker) on AARoads, 1/21/2018)

The original definition of LRN 70 was; "LRN 1 near Ukiah to the west line grounds of Mendocino State Hospital."  LRN 70 originated from LRN 1/Redwood Highway 2,446 feet south of the Ukiah Town Limit in its original definition along Talmage Road, and is first be seen on the 1926 Division of Highways State Map.
(Source: Gribblenation Blog (Tom Fearer), “Former US Route 101 on State Street in Ukiah and the Highway Corridors of Ukiah”, March 2021)

There are no state signs, but the route does have postmiles. The primary justification for this route being in the system was the State Hospital, which is now a Buddhist Temple. 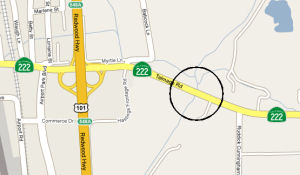 In March 2009, the CTC approved a project to replace the existing Russian River Bridge and construct roadway improvements. The project is programmed in the 2008 State Highway Operation and Protection Program. The total estimated project cost is $16,500,000, capital and support. Construction is estimated to begin in Fiscal Year 2009-10.

In May 2011, the CTC approved relinquishment of right of way in the city of Ukiah on Route 222 (Talmage Road), consisting of superseded highway right of way.

The Talmage Bridge that crosses over Route 222 in the County of Mendocino is named the "Ronald Ledford Memorial Bridge". It was named in memory of Ronald Ledford, who was born in Ukiah, California, on May 7, 1944, to Ray and Tillie Ledford. Mr. Ledford attended grammar school locally, and graduated from Ukiah High School in 1962. Mr. Ledford followed his family’s historical agricultural roots, spanning more than a century in the Talmage area as a farmer and expanded his business interests by investing in rental properties throughout the Ukiah Valley. Mr. Ledford made significant contributions to the community throughout his lifetime by serving on boards and commissions and in civic organizations, personally supporting many charitable causes as a quiet financial benefactor and an outgoing motivator, and planning many fundraisers, especially causes supporting children and individuals with special needs. Mr. Ledford passed away suddenly on April 26, 2010. Named by Assembly Concurrent Resolution 100, Resolution Chapter 109, on September 4, 2012.
(Image source: Legacy.Com Obituary) 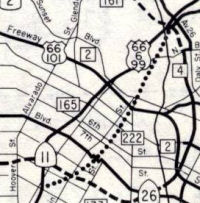 In 1947 (1st Ex Sess), Chapter 11 defined LRN 222 as “[LRN 165] near Adams Street to [LRN 205] near Elysian Park in Los Angeles”. This routing remained unchanged until the 1963 renumbering. The route ran from US 6 (later I-110) near Adams Street to US 66 near Elysian Park in Los Angeles. This was part of the proposed "East Bypass" routing along a route slightly E of Main Street. It was part of the 1964-1965 incarnation of Route 241. It was never constructed, and is not currently part of the state highway system.