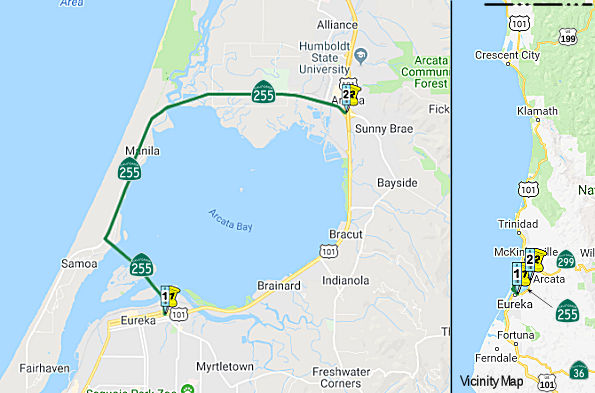 In 1994, Chapter 1220 clarified the routing: “Route 101 in Eureka to Route 101 in near Arcata via the Humboldt Bay Bridge and the Samoa Peninsula”

This route would have been LRN 294, defined in 1963, but that was overtaken by events.

Prior to Route 255 automotive access to the Samoa Peninsula was either via ferry or taking a long drive around Arcata Bay.  The Samoa Peninsula traditionally has been the head of what was until recent decades a large lumber industry in Humboldt County.
(Source: Gribblenation Blog "California State Route 255")

In mid-January 2012, residents of the community of Manila (~ HUM 2.048 to HUM R5.087) installed signage at both entrances to Manila off Route 255 urging motorists to drive safely. Route 255 divides Manila in half. The Pacific Ocean, the beach and dunes, community center, Manila Dunes Recreation Area, the Humboldt Coastal Nature Center and Family Resource Center lie west of the highway. Half of Manila’s population, two churches, the Manila Park and access to Humboldt Bay lie to the east. It is difficult to cross the highway safely because of the high rate of speed of oncoming vehicles and also because of the curves on Route 255 at the Dean Avenue/Pacific Boulevard and the Young Lane/north Peninsula Drive intersections. Manila residents have expressed their safety concerns to representatives of Caltrans at least since the 1970s.
(Source: Arcata Eye, 1/13/2012)

The 2018 STIP, approved at the CTC March 2018 meeting, appears to allocate funding for PPNO 2389, 01-HUM-255 6.0/7.6, the Eureka/Arcta Restoration Project for Mitigation - 3 Parcels (an offshoot of PPNO 0072 on US 101). This is in the vicinity of Eureka & Arcata along Route 255. Construct a wetland restoration project including three parcels as off site mitigation for parent project PPNO 0072, including wetland restoration consisting of freshwater wetland expansion, muted tidal restoration of salt marsh habitat, or a full-tidal restoration of salt marsh habitat. This restoration project will serve as mitigation for the parent project, EA 36600, the US 101 Eureka to Arcata Corridor Improvement Project. The parcels are:

In March 2011, the CTC authorized relinquishment of right of way in the county of Humboldt along Route 255, at Jackson Ranch Road (~ HUM 6.03), consisting of a collateral facility.