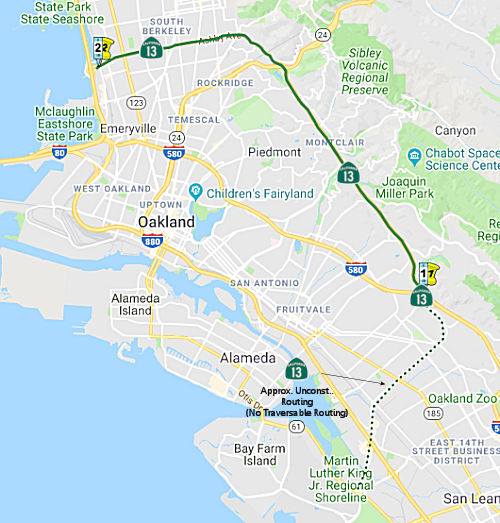 Construction for this freeway occurred mostly in the late 1950s. The Park Boulevard interchange was designed and designated as a future connection to the Shephard Canyon Freeday (then LRN 235, present-day unconstructed Route 77) through the Oakland Hills toward Moraga.

Constructed as freeway from I-580 to Route 24. Route 61 was a planned freeway that paralleled I-80 near Berkeley. 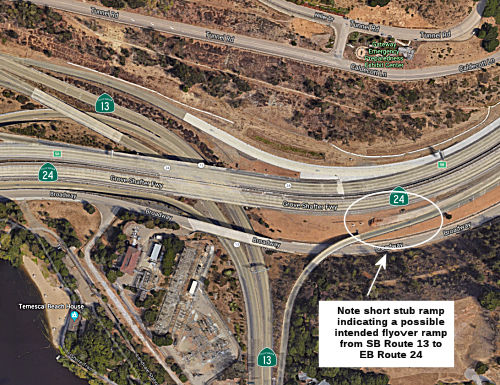 Unconstructed for 4 miles from Route 61 to Route 580. This section would have paralelled Hegenberger Road and 73rd Avenue. However, no local roads adequately fit the definition of a traversable highway. The 4.3 miles that were in the freeway and expressway system were deleted effective 1/1/1982.

Route 13 from I-580 to Route 24 in Oakland (~ ALA 4.262 to ALA R9.421) is named the "Warren Freeway". Earl Warren (March 19, 1891 – July 9, 1974) was an American politician and jurist who served as the Governor of California from 1943 to 1953 and Chief Justice of the United States from 1953 to 1969. The "Warren Court" presided over a major shift in American constitutional jurisprudence, which has been recognized by many as a "Constitutional Revolution" of the liberal, with Warren writing the majority opinions in landmark cases such as Brown v. Board of Education (1954), Reynolds v. Sims (1964), Miranda v. Arizona (1966) and Loving v. Virginia (1967). Warren also led the Warren Commission, a presidential commission that investigated the 1963 assassination of President John F. Kennedy. He is the last Chief Justice to have served in an elected office before entering the Supreme Court, and is generally considered to be one of the most influential Supreme Court justices and political leaders in the history of the United States. Warren was born in 1891 in Los Angeles and was raised in Bakersfield, California. After graduating from the law program at the University of California, Berkeley, he began a legal career in Oakland. He was hired as a deputy district attorney for Alameda County in 1920 and was appointed district attorney in 1925. He emerged as a leader of the state Republican Party and won election as the Attorney General of California in 1938. In that position, he played a role in the forced removal and internment of over 100,000 Japanese Americans during World War II. In the 1942 California gubernatorial election, Warren defeated incumbent Democratic governor Culbert Olson. He would serve as Governor of California until 1953, presiding over a period of major growth for the state. Named by Assembly Concurrent Resolution 96, Chap. 166 in 1957.
(Biographical information source: Wikipedia; Image sources: History.Com; Corco Highways)

This is also "Tunnel" Road and "Ashby" Avenue.

The portion from Route 580 to Route 24 was submitted for inclusion in the interstate system in 1945; it was not accepted.

The route that would become LRN 13 was first defined in Chapter 111 of the 1901 statutes: "That portion of the Sonora and Mono wagon road, commencing E of Sonora and at a point commonly known as Long Barn in Tuolumne Cty and running thence across the summit of the Sierra Nevada mountains to Bridgeport in Mono County is hereby declared a state highway." This route was also referenced by Chapter 150 in the 1905 statutes. It was first funded in the 1909 First Bond Act as a route "From Salida to Sonora". In May 1919, Chapter 510 re-declared this routing to be a state highway, "All that portion of the public highway commencing at the end of the Sonora and Mono state highway at Long Barn in Tuolumne county and leading therefrom to the eastern boundary of the city of Sonora and known as the Sonora and Mono Road is hereby declared to be a state highway...". Thus, in 1935, the routing was codified into the highway code as:

The portion from Salida to Sonora was considered a primary highway.

This route had the following pieces: