From Route 2 north of La Cañada to Route 14 south of Palmdale.

This route is as defined in 1963. This was originally planned as freeway, meeting up with Route 118 in the forest. This route runs through the Angeles National Forest. Although Route 249 did not change in 1966, note the changes in the routes around it -- in particular, Route 196 and Route 122. Route 196 was deleted, and Route 122 was changed not to go through the mountains, but to use Pearblossom Highway. 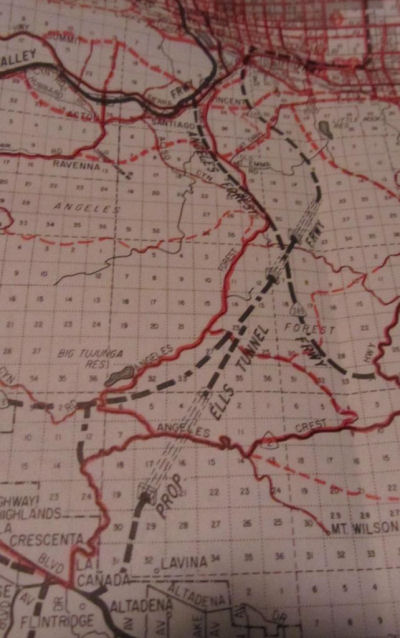 It is currently unsigned and unconstructed. The traversable road is Angeles Forest Highway, Los Angeles County Sign Route N3. There are no plans for Caltrans to adopt this route, as it has insufficient tunnel clearances.

It appears that in 1953 there were plans to construct this as a tunnel. A toll tunnel was originally proposed in 1953 by a civil engineering consultant to El Monte, Joe C. Ells. At the time, newspaper reports quoted Ells as saying the route "would bring Palmdale to within . . . practically commuting distance of Los Angeles." He also said the tunnel would be a "new escape route" in the event of an enemy attack, not too farfetched for a city then possessed with building bomb shelters. Tolls could recover the tunnel's cost, then estimated at $200 million, Ells suggested. Critics, however, said it could take 10 to 15 years to complete.
(Source: Los Angeles Times, 7/29/2001)

Regarding the Ells Tunnel, Sparker noted on AAroads (my editorial observations are in italics):

I remember the "Ells" tunnel proposal, circa 1965-66 or so; it was intended to connect the upper reaches of the Arroyo Seco gorge at its south end (as pictured in the map above) with, again, the upper reaches of another mountain watershed, the Big Tujunga Canyon area (which drained the southwest portion of the national forest) [This appears to what eventually became the extension of Route 118 and Route 249]. Essentially the freeway, alternately dubbed Route 2 along its southern reaches or even Route 122 (the portion extending out into the desert) would stay on the surface (ridge or cliffside) until that became impractical, then tunnel to the next feasible surface segment, repeating until the range was surmounted. In most maps I've seen, the portion of Route 249 (this map looks like it was lifted from a Thomas Bros. regional atlas from that timeframe -- the style and font of the CA state shields give it away; this is definitely not a Division of Highways product!) connecting (after the interchange with the tunnel-laden corridor) to Angeles Crest Highway/Route 2 was designated as Route 196. Route 249 essentially followed the Angeles Forest Highway from Route 2 west of Mt. Wilson north to Route 14 near Vincent. The corridor with the Ells and other tunnels would have likely, if completed as planned, been part of Route 122, which descended to the desert between Palmdale and Pearblossom, crossed Route 138, and struck out NE into the desert, skirting the SE corner of Edwards AFB and terminating at Route 58 west of Hinkley. While the map above shows the Route 122 corridor as serving SE Palmdale by tracing Pearblossom Highway west of Route 138, the Division/Caltrans documents invariably show it several miles east of there. It was intended that after going through the first couple of tunnels, Palmdale-bound traffic would segue onto Route 249 at the mountaintop interchange, while traffic ostensibly heading for Barstow and points beyond would remain on the diagonal desert corridor. The concept here was simple -- central L.A. to Barstow via the most direct feasible route.

At some point surveyors and engineers had to get out into the field to get the "lay of the land", so to speak. [T]he San Gabriels make it exceptionally tough on anything with wheels getting from one side to another -- steep canyons on the south side all the way to the ridge point (averaging about 7500-8000') and, on the north side, a very rapid dropoff from that ridgeline down a couple thousand feet, and then a combination of rockpiles, sand dunes, and flash-flood-prone gorges down to the high desert floor (the saving grace being that while the rise from the south footing to the ridge averaged about 6000' or more, the north side was about half that simply because the high desert floor sat between 3000' and 4000' above sea level). But the entire mountain range is dominated by rocky outcroppings -- difficult for building conventional roads, much less 6/8-lane freeways. Let's just say that any surveyor or engineer coming back from the mountains not disabused of the notion that deploying massive facilities across or through them would be anything but a nightmare was only fooling themselves.

Eventually (early '80's on) a simplified freeway arrangement was proposed: one freeway (Route 2 & Route 249) from the La Canada area north to Route 14 near the Pearblossom Highway interchange and another (Route 122) from that same point on Route 14 diagonally across the desert; the Route 196 connection to Angeles Crest Highway bit the dust Only one other corridor was retained: an eastern extension of Route 118 up Big Tujunga Canyon to provide access to and from the San Fernando Valley. Like the first iterations, those were simply lines on a map; not one foot of San Gabriel Mountain freeway has ever been formally adopted much less considered for funding. And with the push to curtail urban sprawl, it's likely these routes will remain unbuilt. 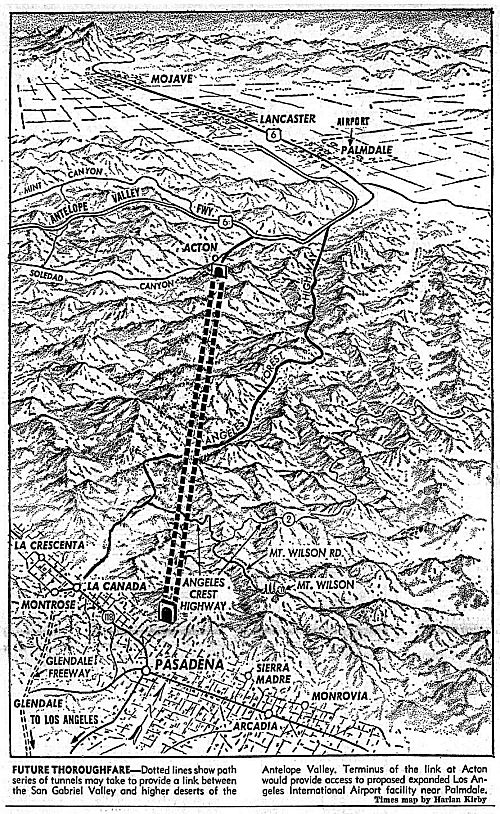 An article in the Los Angeles Times provided more information. It noted that the tunnel was first proposed in the 1940s. After leaving La Cañada, it would generally parallel the existing Angeles Crest Highway (Route 2) to the connection with Angeles Forest Highway (Route 249). Down the other side of the mountains, it would continue generally along Angeles Forest Highway to an interchange with the Antelope Valley Freeway (US 6, now Route 14). The plan would be for this to be a toll tunnel. Another proposal would start the route in the mountains north of Fair Oaks Ave in Pasadena and east of Devils Gate Dam, and continue N to Acton, with a surface freeway continuing N to US 6/Route 14. The 15.7 mile tunnel would have three sections: one for high speed trains, and one for each direction of traffic (north and south). They estimated studies would start around 1971, with construction starting around 1985 (far in the future). The Angeles Crest Freeway would be an extension of the Glendale Freeway.
(Source: Carol Stephens on FB, 8/18/2021)

Although not quite Route 249, there do appear to be plans to explore a Palmdale to Los Angeles tunnel that approximates the route that might have been used for Route 249. According to the LA Daily News, in 2004, Los Angeles County and Palmdale will spend $125,000 on the third study in five years into building a highway across the Angeles National Forest by tunneling through the San Gabriel Mountains. The last study, in 2002, looked at building the highway as a privately financed toll road and concluded that it could could cost $2.2 billion and was unlikely to pay for itself with tolls low enough to be acceptable to motorists. Previous plans have looked at creating a 21-mile-long highway that would branch off the Antelope Valley Freeway south of Palmdale and head south and a little west to the Foothill Freeway at its intersection with the Glendale Freeway.

In 1959, Chapter 1062 defined LRN 249 as “[LRN 10] near Exeter to [LRN 17] near Roseville on a route along the easterly side of the San Joaquin Valley to be selected by the California Highway Commission, which route may include all or portions of any existing state highway route or routes”. This was a proposed freeway routing for Route 65 that ran roughly parallel to and east of Route 99.