No current routing. At one point, portions of the former routing were signed as Route 30, but upon the connection of Route 210 from San Dimas to Route 215, the Route 30 portion was finally renumbered as Route 210.

In 1963, this route was defined the route from "Route 210 near San Dimas via the vicinity of Highland northeasterly to Route 18." 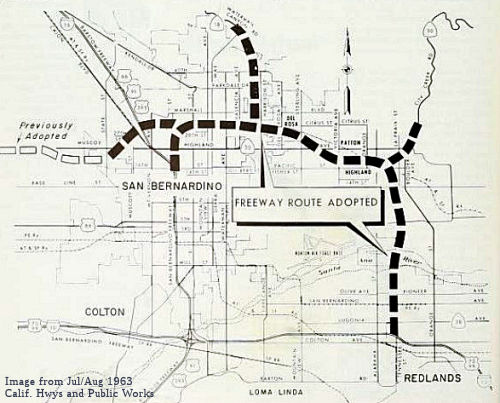 The freeway adoption for Route 30 in the Redlands/San Bernardino area occurred in 1963. A new planned freeway alignment of Route 30 and Route 106 from I-15 to I-10 around San Bernardino appears on the 1965 Division of Highways State Map. Route 106 was defined in 1963 as "from Route 38 near Redlands to Route 30 near Highland", and was extended in 1965 to start at I-10. A small proposed connector freeway for Route 30 to reach I-210 on the Foothill Freeway appears on the 1969 Division of Highways State Map between San Dimas east to Claremont. The planned freeway route for Route 30 from I-210 east to Route 106 appears in far greater detail on the 1970 Division of Highways State Map. Route 30 from Alta Loma east to Muscoy was planned to be built to freeway standards directly over Highland Avenue.
(Source: Gribblenation Blog "Interstate 210 and California State Route 210 on the Foothill Freeway")

In 1972, the portion from the junction with former Route 106 to Route 18 was renumbered as Route 330, and what remained of former Route 106, from the Route 106/Route 30 junction to I-10 became part of Route 30, changing the definition to "Route 210 near San Dimas via the vicinity of Highland to Route 10 near Redlands.".

In 1998, AB 2388 renumbered this route as Route 210. With the completion of the freeway segment, the signage was changed from Route 30 to Route 210, although it is still state shields. Interstate shielding requires AASHTO approval. Until connection of the original I-210 portion to I-215, there were places where the route still appears to be signed as Route 30 (as of December 2009, in Claremont and Upland along Baseline Ave and on 19th Street in Rancho Cucamonga), as well as the freeway portion in San Bernardino.

Note that a big numbering switch also occured in 1964. Prior to 1964, Route 18 ran N from San Bernardino. At Running Springs, it joined with Route 30 (now Route 330) up from Highland, and continued cosigned Route 18/Route 30 to the W end of Big Bear Lake. At this point, Route 30 ran along the S edge of the lake, and Route 18 ran along the N end. When the new definitions went into place, Route 18 was rerouted to the S side of Big Bear Lake (replacing what had been signed as Route 30). The cosigning that existed between the W end of Big Bear Lake and the Route 30 (now Route 330)/Route 18 junction was eliminated, and the route was just signed as Route 18. The old Route 18 routing on the N side of the lake was signed as Route 38. 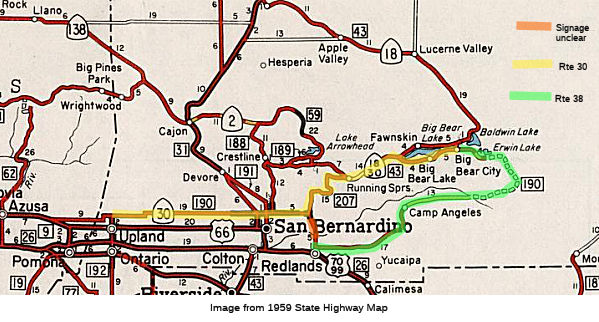 LRN 190 east from LRN 9 in San Dimas utilized Base Line Road over the San Bernardino County Line. LRN 190 continued east onto 16th Street where it made a northbound jog onto Mountain Avenue. From Mountain Avenue LRN 190 turned east onto 19th Street. LRN 190 made a jog from 19th Street north onto what is now Haven Avenue. From Haven Avenue LRN 190 made an eastern turn onto Highland Avenue. LRN 190 continued east through San Bernardino on Highway Avenue and made a southern jog at Boulder Avenue. LRN 190 continued south on Boulder Avenue and swung east onto Base Line Street. From Base Line Street LRN 190 swung towards LRN 26 on a zig-zag alignment of streets with a final connection being made via a spur on Orange Street. The primary route of LRN 190 continued east from Orange Street on Lugonia Avenue towards Big Bear.
(Source: Gribblenation Blog "Interstate 210 and California State Route 210 on the Foothill Freeway")

Route 30 was first signed on the 1952 state highway map running between Los Angeles and the Big Bear resort. By 1953, Route 30 was being signed between San Dimas and Redlands, Route 30, located in San Bernardino County, followed Highland Avenue and City Creek Road, with a temporary western terminus as of 1953 in Upland at the junction of Euclid Avenue and Foothill Boulevard (US 66). The eastern end of Route 30 is at Running Springs on Route 18 west of Big Bear Lake. At the time, it was noted that eventually Route 30 would follow Highland Avenue all the way from its western terminus near Glendora, in Los Angeles County. That designation was pending until the portion of Highland Avenue between Glendora and Upland had been improved.

The former portion of Route 30 that was later re-numbered as Route 330 was signed as Route 30, and was LRN 207 (defined in 1937). CHPW noted that since the improvement of City Creek Road around 1950, more and more cars from the Los Angeles area were using the Route 30 (Route 330) route as an alternate way of getting to Lake Arrowhead and Big Bear Lake.

The routing from I-210 near San Dimas to I-10 in Redlands was submitted for inclusion in the interstate system in 1968, but not accepted. See I-210 for a history of submissions of this segment as part of Route 210.

The designation I-30 was proposed in December 1957 for what is now I-40; this was rejected by AASHTO.

Cameron Kaiser reports that as of May 2009, most of the Business Route 30 signs on Highland in San Bernardino are still up, even amidst recent street work (including a set of new red light cameras at Waterman and Highland).

Postmile Note: Route 30 postmiles were renumbered into Route 210 postmiles when the highway was renumbered. This should be nominal change for SBD postmiles, as they both started from 0 at the same point. For LA postmiles, 030 LA 0.0 should be ~ 210 LA 43.904.

According to one correspondant, within the city of Upland (~ 210 SBD 2.698), all Route 30 shields have come down. There remain, however, shields for Route 30 in Rancho Cucamonga, Fontana, and Claremont and La Verne (although recently the freeway entrance shields for the ramps at Lone Hill and San Dimas Avenues have been changed from Route 30 to Route 210).

A 5½-mile stretch of the new freeway, from Rancho Cucamonga to Fontana, opened in July 2001. The new stretch extends from Day Creek Boulevard in Rancho Cucamonga to Sierra Avenue in Fontana (~ 210 SBD 9.17 to 210 SBD 14.945). The eight lane thoroughfare, including two carpool lanes, is expected to handle between 115,000 and 120,000 vehicles each day. According to Don Hagstrom in May 2002, Route 210 (former Route 30) is open from Day Creek Bl. to Sierra Ave. The portion from Foothill Bl. in La Verne (connecting to the current open portion once known as Route 30) to Sierra opened on November 24, 2002, and will be numbered as Route 210. The rest of the freeway into Rialto and San Bernardino, connecting with the stub portion west of I-215 will be complete by 2007.

Current planning maps show Route 30 continuing from the terminus of Route 210 and Route 30 to San Bernardino, using Highland Ave. As of about 1996, a section of freeway existed from Route 215 to approximately 5 miles east to Highland Ave (currently 210 SBD 11.716 to 210 SBD 13.854), in San Bernardino. This will be renumbered as Route 210 once the currently existing Route 210 portion is completed to I-215.

As of December 2008, field reports confirmed that Route 30 is now completely resigned as Route 210 on all overhead signs and trailblazers, as well as on approaching routes. In some cases, a Route 210 shield was pasted over an Route 30 shield on the overhead signs, but in many cases, an entirely new sign panel was put up. About half of the postmila bridge ID signs at the overcrossings and undercrossings have been changed from SBD-30 to SBD-210. The postmile markers that showed the route as Route 30. There appears to be one exception, on the short Route 259 connector that links NB I-215 with eastbound Route 210. There is one interchange on that route at Highland Avenue. The shield on the freeway entrance sign at Highland for NB Route 259 (which defaults into EB Route 210) is still an Route 30 shield, rather than Route 210, and the sign designating it as the business route for Route 18 and Route 30 is still there approaching the Highland offramp.

In June 2011, the CTC authorized relinquishment of right of way in the city of Highland along Route 30 on Victoria Street, consisting of collateral facilities (~ SBD 11.92).

Overall statistics for Route 30, before renumbering as Route 210:

The segment of this route from Route 210 to Route 10 is named the "Foothill" Freeway (although it is not all constructed to freeway standards). It was officially named by Senate Concurrent Resolution 29, Chapter 128, in 1991.

This portion of this route from Route 66 to Route 210 is part of "Historic Highway Route 66", designated by Assembly Concurrent Resolution 6, Chapter 52, in 1991.

The portion of this route from Route 66 to Route 210 is part of the "Arrowhead Trail (Ocean to Ocean Trail)". It was named by Resolution Chapter 369 in 1925.

The portion above was part of the "National Old Trails Road".

The portion above was part of the "New Santa Fe Trail".

The portion above also appears to have been part of the "National Park to Park Highway", and the "Pikes Peak Ocean to Ocean Highway".

HOV lanes are under construction or planned as follows:

The routing that was to be LRN 30 was defined in the 1909 First Bond Issue as running from Oroville to Quincy. This was likely the Oroville-Quincy Highway. In the 1919 Third Bond Issue, the route was abandoned as a state highway and LRN 21 extended to cover the mileage to Quincy.

Tom Fearer notes the following in his Gibblenation Blog entry on LRN 30, California State Route 162 to the Bidwell Bar Bridge (both the 1965 and 1856 variants): The route of LRN 30 east of Oroville used the following route: