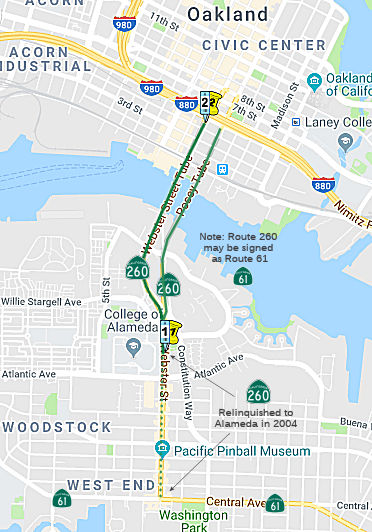 (a) Route 260 is from Route 61 in Alameda to Route 880 in Oakland near Seventh and Harrison Streets.

In 1965, Chapter 1372 created Route 260 via a transfer from Route 61. The definition was: “Route 61 in Alameda to Route 17 in Oakland near Seventh and Harrison Streets”. That same year, Chapter 1371 reiterated the conditions that had accumulated for the previous legislative version of the route, LRN 226:

“361.1 Upon the completion of the additional subterranean tube between the Cities of Oakland and Alameda, in the vicinity of Webster Street, to be used in connection with the Posey Tube, both of which tubes are included in the description of Route 61, the department may by executive order, rule, or regulation, designate both of said tubes, and the approaches leading to or from the nearest state highway or city street, as one-way highways, and thereafter restrict said tubes and approaches to one-way traffic, proceeding in opposite directions as to each other. Upon the placing of signs notifying the public of such restrictions, any person who wilfully fails to observe such sign is guilty of a misdemeanor.”

“361.2 Because of the statewide interest in navigation, the state will hold and save the United States of America free and harmless from liability for damages to the parallel tubes between the Cities of Oakland and Alameda included in the description of Route 61 due to the initial dredging work and subsequent maintenance dredging in an area within 50 feet of said tubes in connection with the deepening of the Oakland Estuary by the Corps of Engineerings of the United States Army and the Director of Finance shall execute an agreement so to do with the proper representatives of the United States of America.”

Based on the new bill, in December 2004 the CTC considered relinquishment of a portion of Route 260 right of way in the City of Alameda, between Atlantic Avenue and Central Avenue, under terms and conditions as stated in the cooperative agreement dated May 21, 2004, determined to be in the best interest of the State. Authorized by Chapter 325, Statutes of 2004, which amended Section 560 of the Streets and Highways Code. This appears to have been the work of the West Alameda Business Association (WABA), as reported in San Francisco Bay Crossings. This article talks about the changes to the street now that the highway designation has been dropped:

As a highway, the street had to be as wide as possible and well lit, leaving darkened narrow sidewalks. Sidewalks are being widened, and sidewalk furniture will be installed along with much-anticipated Acorn Street Lights. The old trees have been removed, and they will soon be replaced by a variety of flowering trees. Putting utilities underground will also improve the look of the street, making it a lovely street for strolling. Buses run regularly along the street, and the ferry is close by.

Although a distinct route from Route 61, this route is signed in its entirety as Route 61.

Tunnel 33-0106R, the tube between Alameda and Oakland that goes beneath the Oakland Estuary, is named the "George A. Posey Tube". It is named for George A. Posey, the engineer who devised its construction. This construction required sinking precast concrete segments into a trench running along the floor of the Oakland Estuary, and includes a ventilation system (designed by Posey) that placed high-powered fans in the portals on either end of the tube. The tube runs beneath the floor of the estuary. Construction started in 1925 and was completed in 1928.
(Image source: Bridgehunter; Oakland LocalWiki)