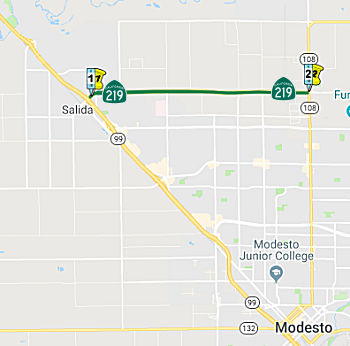 This routing in unchanged from its 1963 definition. 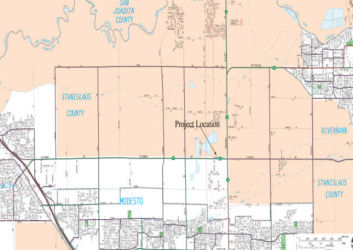 There are currently plans to widen this route in Stanislaus county. [May 2002 CTC Agenda, item 2.1b.(2); July 2002 CTC Agenda item 2.2c.(8)] According to the July and September 2006 agendas, the project, as currently scoped, will widen Route 219 to four lanes from PM STA 0.1 to STA 4.9. In March 2005, an updated cost estimate placed R/W capital at $42 million and Construction capital at $33 million. The increase in R/W was due to the rise in property values, including the right of way needed to accommodate estimated traffic capacity based on an updated traffic analysis. Due to funding constraints, and the result of a Value Analysis Study, the Department of Transportation, StanCOG, and local officials reduced the scope of the project by splitting it into two phases. Phase 1 will extend from PM 0.1 to 2.9 and be fully programmed through construction. The scope of the work for Phase 1 includes acquiring right of way for an ultimate six- lane facility, widening the highway from two to four- lanes, and upgrading intersections with local roads. As part of the intersection improvements, an additional receiving lane and a right-turn lane will be added at the intersection of Route 219 and Sisk Road. Phase 1 will be ready for construction during the Summer of 2007. Phase 2 will extend through the remainder of the original scope, from PM 2.9 to 4.9, and be funded at a later date. In 2007, the Corridor Mobility Improvement Account (CMIA) was recommended to fund $14,760K to widen this route to 4-lanes from Route 99 to Marrow Rd, and $18,813K to widen the route to four lanes from Marrow Rd to Route 108. In June 2008, the CTC approved reducing Regional Improvement Program (RIP) Right of Way Capital funds from $17,000,000 to $14,760,000 ($2,240,000 decrease) and increasing federal Demonstration (Demo) Right of Way Capital funds from $0 to $2,240,000 ($2,240,000 increase). The RIP funds would be programmed and allocated to the Route 219 Expressway, Phase 1A project so that the construction phase can commence. Federal Demo funds, which are programmed for construction of the Route 219 Expressway Phase 1A project but are temporarily unavailable, will be reprogrammed to the Route 219 Expressway Phase 2 project so that it remains fully funded.

In December 2011, the CTC authorized relinquishment of right of way in the county of Stanislaus along Route 219 from Kiernan Court to Dale Road (~ STA 0.28 to STA 1.854), consisting of collateral facilities.

In January 2017, the CTC authorized relinquishment of right of way in the county of Stanislaus along Route 219 on American Avenue, Morton Road, Carver Road, Tully Road, Tunsen Road, and Claribel Road to Route 108 (10-Sta-219 PM 2.35/4.86, roughly between Soddard and American), consisting of collateral facilities. The County, by Board of Supervisors Action No. 2016-535 dated October 25, 2016 agreed to waive the 90-day notice requirement and accept title upon relinquishment by the State.

The SAFETEA-LU act, enacted in August 2005 as the reauthorization of TEA-21, provided the following expenditures on or near this route (although these expenditures seem to be more for Route 108):

The portion of Route 219 between Route 99 and Route 108 in Stanislaus County (i.e., the entire route) is officially designated the "CHP Officer Earl Scott Memorial Highway". It was named in memory of California Highway Patrol Officer Earl Scott. who was tragically shot and killed while making a traffic stop on Route 99 in Stanislaus County on February 17, 2006. Officer Scott was 36 years old and had served with the California Highway Patrol (CHP) for five years. Officer Scott came from a long line of family members who devoted themselves to public service under the auspices of the CHP, including his father and two uncles who retired from the CHP as sergeants, and a cousin who currently serves as a sergeant with the CHP. Officer Scott is remembered as being the first to volunteer for such causes as shaving his head for "Shave the Brave," a fundraiser for cancer victims. Officer Scott also frequently took youth Law Enforcement Explorers on ride-alongs. Officer Scott touched many lives and leaves behind many fellow officers whose friendship with Officer Scott was more akin to being a family. Named by Assembly Concurrent Resolution 31, Resolution Chapter 47, on July 11, 2011.
(Image sources: Modesto Bee; Find a Grave)