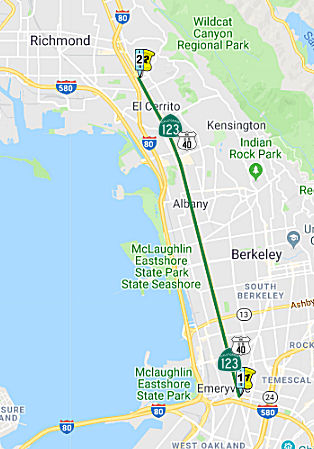 From Route 580 at San Pablo Avenue in Oakland to Route 80 in Richmond at Cutting Boulevard.

In 1963, Route 123 was defined as the route from "Oakland to Route 80 in Richmond at Cutting Boulevard."

In 1990, Chapter 1187 clarified the definition: "Route 580 at San Pablo Avenue in Oakland to Route 80 in Richmond at Cutting Boulevard."

This is the old surface street routing of US 40 along San Pablo Ave. between Peralta Street and Cutting Blvd. It was LRN 14, defined in 1909. This was signed as Business US 40 until 1964. Tom Fearer has a good summary of the history of the US 40 aspects of this route on his Gibblenation blog California State Route 123/San Pablo Avenue; a trip down Old US Route 40 and the US Route terminus points in the Oakland Area. Former US 40 on San Pablo Avenue/LRN 14 apparently was signed as US 40 Business until 1964 after the mainline was moved to the East Shore Highway. By the 1964 State Highway renumbering LRN 14 south of El Cerrito to MacArthur Boulevard was assigned Route 123 while mainline US 40 was co-signed with I-80.

Note that Route 123 doesn't cover all of the older surface street routing of US 40. In particular, N of El Cerrito, former US 40, bypassed in 1958, is not part of the state highway. This is probably because the Eastshore Highway originally fed straight into San Pablo Avenue just south of Cutting Boulevard in El Cerrito (next to the current El Cerrito Del Norte BART station); that intersection was the original northern terminus of the 1940 Business US 40. In 1958, the Interstate 80 bypass north to the Carquinez Bridge was built and signed as I-80/US 40; the orphaned portion of Eastshore Highway south of Cutting Boulevard and San Pablo Avenue became a city street, while Business US 40 was extended to San Pablo Avenue north of Cutting all the way to Crockett and Rodeo. So why wasn't Route 123 designated on all of former Business US 40? This has to do with the legislative numbering history. Before the Crockett bypass portion of the Eastshore Freeway was built, the Eastshore Highway was LRN 69 from Eastshore/San Pablo in El Cerrito south to the Macarthur Maze, and San Pablo Avenue was LRN 14 from Eastshore/San Pablo south to then-US 50 (now I-580), connecting back to US 40 (now I-80) via Macarthur Boulevard and Freeway. North of the original Eastshore/San Pablo split, San Pablo Avenue was all LRN 7 to the Carquinez Bridge. But when the Crockett bypass was built for I-80/US 40, LRN 7 was completely moved over to that new freeway and did not apply to the now-business route. Thus, state maintenance did not carry over on the former alignment and only former LRN 14 (plus Cutting Boulevard, which was never part of the US 40 route and only serves to connect San Pablo Avenue with I-80.) Also orphaned by the construction of the 1958 freeway was a very small segment of the Eastshore Highway from Potrero Avenue (at its interchange with I-80) north to San Pablo Avenue; this had formerly been LRN 69 but LRN 69 was redesignated to apply specifically to the freeway in that area. That segment is now known as Eastshore Boulevard and serves to connect eastbound I-80 with northbound Route 123 past the El Cerrito Del Norte BART station. In 1964, when the great renumbering occured, the portion of Business US 40 which was now no longer covered by LRN 7 became local street; the portion of Business US 40 which was still LRN 14 is now Route 123 (which is signed at least at the Cutting/San Pablo and I-80 junction). 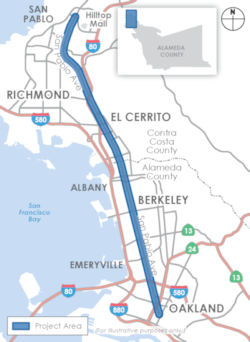 In November 2017, it was reported that a nine-year, $300 million-plus project to accommodate growth on the San Pablo Avenue corridor — covering more than 13 miles from Richmond’s Hilltop neighborhood to downtown Oakland — awaits user input. The project, now in the planning stages, is a partnership of the Alameda County Transportation Commission, the lead agency, and the West Contra Costa Transportation Advisory Committee to develop a vision for the corridor through Richmond, San Pablo and El Cerrito in Contra Costa County, and Oakland, Emeryville, Berkeley and Albany in Alameda County. The planning also includes consideration of new development along San Pablo that would increase foot, motor and bicycle traffic. “Jurisdictions are concentrating growth along the corridor, with several higher-density, mixed use developments recently completed and numerous others under consideration,” notes the project website, www.alamedactc.org/SanPabloAve. Improvements “could include transit priority treatments such as queue jump lanes and signals to bypass congested segments and improve reliability, transit signal priority, signal modernization and coordination, and enhanced bus stops or stations,” as well as measures to enhance bicycle and pedestrian safety. The project timeline envisions scoping (input), planning, engineering and design phases through 2024, with construction from winter 2024 to winter 2026. The estimated cost is $312 million, funded through federal, state and local sources.
(Source: East Bay Times, 11/20/2017)

Historically, this route is close to the original "El Camino Real" (The Kings Road). A portion of this route has officially been designated as part of "El Camino Real by Assembly Bill 1707, Chapter 739, on October 11, 2001.

In 1933, Chapter 767 added two segments to the state highway system:

In 1935, this was added to the highway code as LRN 123, with the following definition:

This route remained unchanged until the 1963 renumbering. It was signed as Route 59.