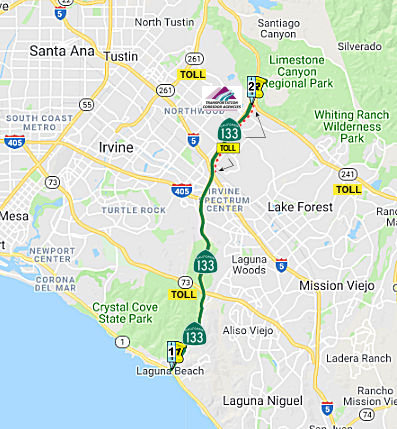 From Route 1 near Laguna Beach to Route 241.

The first segment of the Laguna Freeway opened in 1970.

In 1996, Route 133 brought further changes. Chapter 1154 clarified the origin of Route 261 as “Walnut Avenue in the City of Irvine” (Walnut Avenue and Jamboree) and changed the end to Route 241, reflecting an extension of Route 241 along the what had been Route 231 to Route 91. The portion of Route 231 between Route 241 and I-5 was dropped, and Route 133 was extended to take over the former portion of Route 231 between Laguna Canyon and Route 241 when Chapter 1154 extended Route 133 to terminate at Route 241. This extension came from a transfer of a portion of former Route 231. This likely reflected a decision by Caltrans that a toll and a free road could have the same number (see Route 73), so Route 231 only served to confuse drivers.

In 2020, Chapter 126 authorized the relinquishment to the City of Laguna Beach the portion of Route 133 that is located from Route 1 to El Toro Road by adding section 433.1:

LRN 185 (Route 133) was expanded to expressway standards in 1952. In 1958, the completion of the El Toro Road-Laguna Canyon Road segment of US 101/Santa Ana Freeway was announced.  The relocation of US 101 onto the Santa Ana Freeway in Irvine included relocating the northern two miles of LRN 185 off of Laguna Canyon Road.  The northern two miles of LRN 185 were constructed to expressway standards that could be expanded easily to a divided four lane freeway.
(Source: Gribblenation Blog (Tom Fearer), "California State Route 133", 1/7/2022)

Route 133 was not defined in the initial set of state signed routes in 1934.

The portion of the route between Route 5 and Route 241 is a toll road. This route is the east leg of the Eastern Transportation corridor. It connects the Foothill Transportation Corridor (Route 241) with the Laguna (Route 133) Freeway just south of I-5. 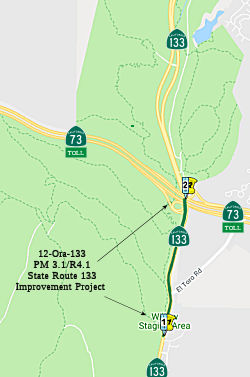 In October 2017, the CTC approved for future consideration of funding a project, located in Orange County (12-Ora-133, PM 3.1/3.6), that proposes to extend the north and southbound acceleration lanes on Route 133 and re-align the El Toro Road westbound turn lane in the city of Laguna Beach. The project is fully funded and programmed in the 2016 SHOPP for $9,991,000. The project is estimated to begin construction in Fiscal Year 202-21. The scope, as described for the preferred alternative, is consistent with the project scope programmed by the Commission in the 2016 SHOPP.
(Source: CTC October 2017 Agenda Item 2.2c.(1))

In December 2018, the CTC approved for future consideration of funding a project located on Route 133 in Laguna Beach in Orange County. The project proposes to improve safety at the Route 133/El Toro intersection and improve drainage flow at the intersection. The project proposes to widen existing shoulders and provide bike lanes. The proposed project is estimated to cost approximately $41.1 million. This project is funded through the State Highway Operations and Protection Program (SHOPP) and the County of Orange and is currently programmed in the 2018 SHOPP for approximately $21.4 million. Construction is estimated to begin in 2021. The scope, as described for the preferred alternative, is consistent with the project scope programmed by the Commission in the 2018 SHOPP.
(Source: December 2018 CTC Minutes, Agenda Item 2.2c(1))

In February 2013, it was reported that during a highway-widening project in California’s Laguna Canyon, scientists identified several new species of early toothed baleen whales. Paleontologist Meredith Rivin of the John D. Cooper Archaeological and Paleontological Center in Fullerton, California, presented the finds at the 2013 annual meeting of AAAS. The Laguna Canyon outcrop, excavated between 2000 and 2005, turned out to be a treasure trove containing hundreds of marine mammals that lived 17 million to 19 million years ago. It included 30 cetacean skulls as well as an abundance of other ocean dwellers such as sharks. Among those finds were four newly identified species of toothed baleen whale—a type of whale that scientists thought had gone extinct 5 million years earlier.
(Source: ScienceNow, 2/17/13)

In January 2011, the CTC relinquished right of way in the city of Irvine along Route 133 at Laguna Canyon Road, consisting of collateral facilities.

In June 2001, the CTC considered a proposal to adopt a routing for Route 133 from ORA 4.1 at Route 73 to ORA 8.1 0.3mi S of I-405. This was part of an eventual project to widen the 2-lane highway to 4-lanes. As part of this project, Route 133 was rerouted in July/August 2004. Caltrans launched the project in January 2003, focusing on a four-mile section between the San Joaquin Hills Toll Road (Route 73) and the San Diego Freeway (I-405). The road, built in the early 1900s, carries 29,000 cars a day. When construction was completed in 2006, the roadway was less curvy, have a new drainage system and have two lanes in each direction. The lanes opened fully in October 2006. The $32 million project on the northern half of the road involved rerouted around two lakes, which will eliminate flooding during the rainy season. It also has wider shoulders and a center median. Crews built four trail and wildlife crossings that will promote wildlife access between open-space areas east and west of the road. Utility lines are now underground, and there is a new bike lane. There are 29,000 cars that use the road each day in 2006; in 2020, that number will swell to 32,000 to 56,000 cars a day. The road was originally a stagecoach route.

In May 2020, the CTC approved for future consideration of funding for the Route 133 Operation Improvements Project (12-Ora-133, PM 8.3/9.3), which will construct a new auxiliary lane on southbound Route 133 in Orange County. (PPNO 4846). The project is located in the City of Irvine in Orange County and proposes to construct a new auxiliary lane on Route 133 from the North Bound (NB) I-405 connector to the South Bound (SB) I-5 connector. This new auxiliary lane will become the second lane on the NB Interstate 405 connector. This project is currently programmed in the SHOPP for $25,102,000, which includes Construction (capital and support) and Right of Way (capital and support). The total estimated project cost is $182,298,000. Construction is estimated to begin 2021-2022. The scope, as described for the preferred alternative, is consistent with the project scope programmed by the Commission in the 2018 SHOPP.
(Source: May 2020 CTC Agenda, Agenda Item 2.2c.(1))

The 2020 Capital Improvement Plan for the TCA includes a study for the potential for a new interchange on the Route 133 Toll Road at Great Park Boulevard (Trabuco Road) (~ ORA 10.869). The intent of this new access is to alleviate traffc demand at the nearby Sand Canyon Avenue/I-5 interchange. Preparation of a PSR-PDS document is underway by Five Points Communities. F/ETCA, as a stakeholder, is coordinating with Five Points Communities and the City of Irvine as the project development process continues. A traffc and revenue study is being conducted by F/ETCA to understand the traffic associated with the proposed interchange and any changes in traffc volumes on The Toll Roads.
(Source: 2020 Fiscal Capital Improvement Plan, 6/13/2019)

The toll-free portions of this route (i.e., from Route 5 to Laguna Beach) is named the "Laguna Freeway". It was named by the State Highway Commission in 1958, extending from Irvine south to the outskirts of Laguna Beach. The first segment of the Laguna Freeway opened in 1970.
(Image source: Mar/Apr 1958 California Highways and Public Works, via Gribblenation Blog "California State Route 133") 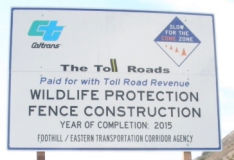 The toll portion of this route is called the East Leg of the Eastern Transportation Corridor.
(Image source: ACEC of California) 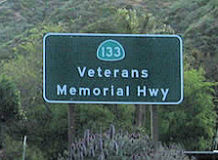 The Laguna Canyon Road portion has been renamed the Veterans Memorial Highway. When this was done is unknown, but there is at least one sign to this effect. It was dedicated to the military veterans of Orange County, who numbered 252,000 at the time of the dedication in 1998.
(Image source: AARoads)

Overall statistics for Route 133 (as of 1995, before the tollway was constructed or defined for the route):