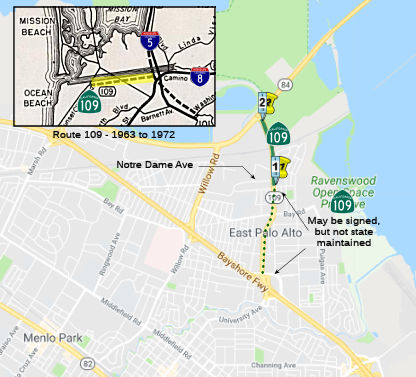 In 1988, Chapter 416 extended the segment from Notre Dame Avenue to US 101, making the definition “Route 84 to Route 101.” The definition explicitly noted that “The department is not responsible for the maintenance or operation of Route 109, except for that segment between Notre Dame Avenue in East Palo Alto and Route 84” (which meant that the extension was signing purposes only).

In 1997, SB 789 (Chapter 277) amended the condition, permitting Caltrans to “maintain and operate the segment of Route 109 within the City of East Palo Alto upon a determination by the department and the city that the segment is in an acceptable state of repair.”

This route is unconstructed from US 101 to 1 mile north. It turns into University Ave in E Palo Alto, and runs from Route 84 to Notre Dame Avenue.

The remainder of the route is unsigned.

There are some that speculate that this routing would provide a southern connector to the Dumbarton Bridge. However, any such planning would need to involve the local community planning agencies, as California Streets and Highway Code section 409 states "no study and analysis of any proposed segment of Route 109 shall be conducted without the involvement of the governing body of any city or county through which the segment would pass as an active participant in the study and analysis."

The present routing is University Avenue between Route 84 and Route 101. This routing was not defined before 1984.

In October 2001, it was reported that a proposal to build a southern extension to the Dumbarton Bridge through the Palo Alto Baylands is once again being met with alarm and disdain by Palo Alto city officials. City officials say a connector to the bridge would also impact traffic on Palo Alto streets that are too congested already. Other ideas being proposed include building a second level to the bridge and special on-ramps for vehicles with two or more passengers. The 84-page conceptual report, however, only commits one page to the Dumbarton Corridor. There are also several maps showing various proposals to decrease traffic on the Dumbarton Bridge. But it is the map showing the extension - which would run from the bridge across portions of East Palo Alto, Palo Alto and the Baylands and finally hooking up with Oregon Expressway -- that has city officials worked up. The council was so worried about these plans they created a policy to deal with the bridge extension. Policy T-53, in the city's Comprehensive Plan, states the city would "participate in seeking a regional solution to improved roadway connection between US 101 and the Dumbarton Bridge without construction of a southern connection across environmentally sensitive baylands." Eakins and Council members Vic Ojakian and Lanie Wheeler, wrote a memo to their colleagues reminding them of the California Streets and Highway Code section 409, which states "no study and analysis of any proposed segment of Route 109 shall be conducted without the involvement of the governing body of any city or county through which the segment would pass as an active participant in the study and analysis." "Notwithstanding this state law, the southern connection has resurfaced in the Bay Crossings with absolutely no consultation with Palo Alto," the memo states. "This is cause for great concern."
(Source: Palo Alto Weekly, 10/5/2001)

In 2002, it was noted that there have been attempts to persuade the city of Palo Alto to relinquish the portion of University Avenue between Notre Dame and US 101 to the state as a continuation of Route 109. However, the city remains reluctant to such a proposal. Further, the city of E Palo Alto has requested the state to terminate the process of determining a traversable local highway for Route 109.

In April 1958, it appears that the designation I-109 was proposed for the route that is now I-280. This was part of the first attempt to assign 3-digit interstates n California. The number was rejected by AASHTO.

In 1933, Chapter 767 defined the route from “[LRN 4] at Modesto Northerly to [LRN 13] between Salida and Riverbank” as part of the state highway system. In 1935, this definition was codified into the highway code as LRN 109.