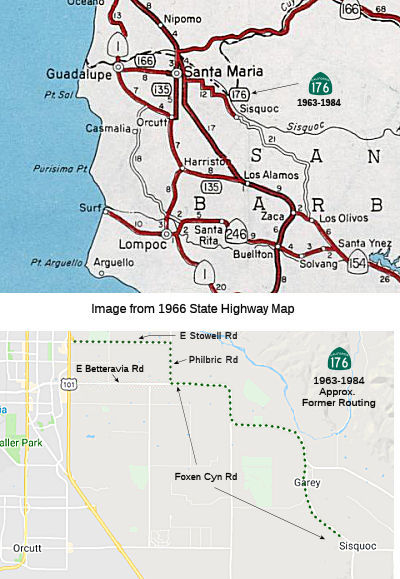 Stowell Road and Foxen Canyon Road are the former routings of this highway. At one point, Route 176 westbound made a right turn on Philbric Road to the town of Rex, and then continued on what was now Main Street to the current south Route 166/US 101 junction.

Some more information on this route was provided on AAroads: The US 101 Santa Maria bypass was completed about a year or so prior to the Great Renumbering of '64; as such, the routings were changed while LRN's were still "the law of the land", so to speak. At that time, Route 166 from Route 1/LRN 56 at Guadalupe east to US 101 was part of LRN 148. When the bypass was completed around the east side of town, LRN 148 was extended east to the bypass, signed as Route 166, which then turned north to multiplex with US 101/LRN 2 to a point north of town, where it turned east on Route 57 toward Maricopa. Prior to then, LRN 148 jogged on Broadway (old US 101, now Business Route 101/Route 135) south to Stowell Road, where it turned east. The segment from Broadway to the bypass was relinquished when LRN 148/Route 166 continued east to the new US 101 freeway. The segment of Stowell Road east of the US 101 freeway, and the rest of former LRN 148 east to Sisquoc, became the new Route 176; it received signage in late 1968 (about the time that most formerly unsigned state-maintained highways in Santa Barbara County, such as Route 135, Route 144, Route 217, Route 224, and Route 225 were signed in the field). The route was eventually relinquished to the county circa 1984, with signage being removed within a couple of years.
(Source: Scott Parker at AAroads, 4/7/2018)

In 1933, the route from "Buena Park-Azuza Road near La Habra to [LRN 43] in Santa Ana Canyon via Brea" was added to the state highway system. In 1935, this route was added to the highway code as LRN 176 with the routing:

This route ran from former Route 42 near Norwalk (before 1959, I-605) to LRN 43 (US 91) in Santa Ana Canyon. This is the eastern portion of Route 90, which was formerly part of Route 42. The original routing, pre-freeway, in Yorba Linda was a bit convoluted: Imperial Highway met Yorba Linda Blvd, and continued E to Ohio Street, then down Ohio to Mountain View, and across Mountain View to Orchard Dr. it then ran down Orchard Dr to Orangethorpe, when it ran concurrent with LRN 175 (Route 14) to LRN 43 (Route 18/US 91) at Imperial Highway. Orchard Drive has since been renamed, and slightly rerouted, as Kellogg Drive.
(Source: Cahwyguy on AAroads, 11/18/2019)

It is now freeway near Yorba Linda.