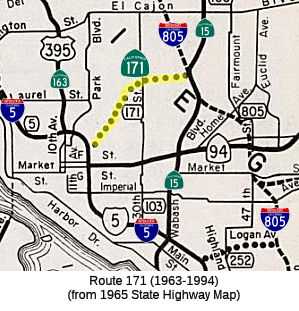 In 1994, the previous routing for Route 171, from Route 5 near San Diego to Route 805 via Switzer Canyon, was deleted per AB 3132, Chapter 1220. This was part of a road system first proposed in 1926. It would have started at I-5 near downtown San Diego, run northeast to connect with I-805 near the I-8 junction, crossing several canyons, residential areas, and the Balboa Park Municipal Golf Course. A remnant of what was to be a freeway-to-freeway connection exists at the I-5 and Pershing Drive/B Street interchange (Exit 15B).

According to Tom Fearer, Switzer Canyon was the subject of numerous proposals by the San Diego City Council to be added to the City Park System beginning in the late 1970s.  This culminated in 1987 when the City of San Diego purchased Switzer Canyon which effectively blocked the planned route of Route 171.
(Source: Tom Fearer, Gribblenation Blog "Paper Highways of San Diego; unbuilt California State Route 157, 171, and 252")

This would have been the Switzer Canyon Freeway.

This route ran from Route 1 near Huntington Beach to Route 39 near Buena Park. Between Route 1 and the US 101 junction, this was Route 39. Between Lincoln Ave and US 101, this was US 91; it ran along Huntington Beach Blvd; Stanton Ave; and Grand Ave.