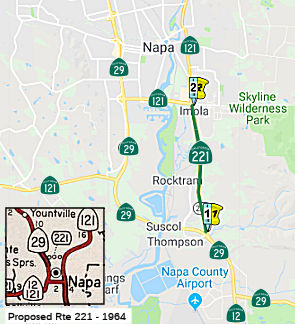 From Route 29 near Soscol Road to Route 121 at Imola Avenue in Napa.

In 1963, Route 221 was defined as "Route 29 to Route 121 near Napa." The 1963 plans for the route (based on what is shown as a proposed routing on the 1963 state highway map) was as a planned freeway bypass N of Napa along either Trancas St or Lincoln Av. This may have been a routing for what was LRN 6.

Note: The routing that was formalized in 1982 (changing the short E/W route between Route 29 and Route 121 N of the E/W portion of Route 121 into a N/S routing from Suscol to Imola) occurred in the field a few years beforehand. Since the original definition was simply a route between Route 29 and Route 121 in the vicinity of Napa, both the original unbuilt northern bypass and the current stretch along South Soscol Ave. fit the definition. The only reason for running the matter by the legislature was to ensure state ownership of the facility after Route 12 and Route 29 were rerouted over the new high-rise Napa River bridge circa 1982 -- necessary for Caltrans to authorize maintenance activities on the highway. As with most matters of the kind, the shift of alignment was buried within the yearly fiscal authorization and essentially "rubber-stamped" by the legislature.
(Source: Scott Parker on AARoads, "Re: CA 221", 9/12/2019)

In 1984, Chapter 409 completely rerouted Route 221, redefining it as "Route 29 near Suscol Road to Route 121 at Imola Avenue in Napa." This change deleted the portion between the original two termini (indicating abandonment of the proposed routing), and the portion from Route 29 near Soscol Road to Route 121 at Imola Avenue was transferred from Route 29. This is a former segment of Route 29 that was bypassed by the Napa River Bridge and the new freeway in the early 1980s. The state wanted to relinquish it; but local authorities didn't want it and it remained in the State Highway System but was renumbered Route 221.

This was part of LRN 8, defined in 1909. It was originally signed as part of Route 29. The segment was previously cosigned as Route 12/Route 29. 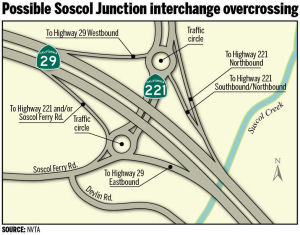 In April 2016, it was reported that the proposed Soscol Junction flyover at Route 29 and Route 221 southeast of the grape crusher statue might become the proposed Soscol Junction roundabouts. Although the $40 million flyover joining southbound Route 221 to southbound Route 29 remains the preferred option to unsnarl the rush-hour backups caused by traffic signal red lights at this key intersection, Caltrans will allow the Napa Valley Transportation Authority and city of Napa to spend a few month exploring whether a double-roundabout design could handle the traffic. The roundabouts would be on either side of Route 29 and serve as the onramps and offramps. They would also allow traffic to take a road passing under or above Route 29 as a link between Route 221 and Soscol Ferry Road. NTVA will spend about $40,000 studying the roundabouts option, with the city of Napa providing the engineering work.
(Source: Napa Valley Register, 4/23/2016)

In August 2018, it was reported that Caltrans and the Napa Valley Transportation Authority were looking for opinions on the particular roundabout approach to take at Soscol Junction. The issue is: one large roundabout or two smaller ones. No roundabouts would be on Route 29 itself. The highway would rise up on an overpass, no longer burdened with the traffic signals that cause long backups. Underneath the overpass is where the roundabout or roundabouts would be. They would control traffic as it enters Route 29 either northbound or southbound or travels between Soscol Ferry Road and Route 221. California created Soscol Junction in 1981 as part of its Southern Crossing project when it opened the nearby Butler Bridge for Route 29. Before that, highway traffic traveled up the east side of the Napa Valley, took Imola Avenue west and then continued on to Sonoma County or Upvalley. The original idea in the 1970s was to have an interchange from the start at Soscol Junction. But money for the project proved tight and transportation officials settled for the cheaper solution of traffic signals. By 2002, Napa County officials were talking about the flyover solution. Now the idea has turned into roundabouts, with the two possible configurations.
(Source: Napa Valley Register, 8/19/2018)

In October 2019, it was reported that a steep rise in the estimated cost for the proposed, congestion-busting Soscol Junction project isn’t sinking building plans. The estimated price has risen from $40 million to $64 million. Napa Valley Transportation Authority Executive Director Kate Miller said the plan is still to break ground in 2021. The longer Soscol Junction is delayed, the more the project will cost, an agency report said. Soscol Junction is the intersection of Route 29 and Route 221/Soscol Ferry Road east of the Butler Bridge and Grapecrusher statue. The plan is to raise Route 29 on an overpass and remove the traffic signals so traffic keeps flowing. Route 221/Soscol Ferry Road beneath the overpass would have two roundabouts to regulate through traffic and traffic entering and leaving Route 29. Route 29 would not have a roundabout. NVTA for several years has listed a price estimate of $35 million to $40 million. A new report pegs it at $64 million, with $50 million needed for construction. The project has been in the environmental phase for years and construction costs rise 3 percent to 6 percent annually. Caltrans recently released the draft environmental document, so that phase is nearing an end. Additionally, competition for construction engineering companies that do this type of work is adding to the estimated cost. The NVTA Board of Directors last week authorized Miller to seek a $20-million advance in regional transportation improvement program money for Soscol Junction. This state money comes to the county in two-year cycles for local transportation projects. The 2020 cycle has $2 million available for new projects. Napa County would tie up several cycles of funding. It would forgo using this money source for other, smaller transportation projects for years to come in exchange for the large, signature Soscol Junction project. Another potential Soscol Junction funding source is regional state bridge toll hikes approved by voters in 2018, though this money is frozen because of a court case challenging the increases. Still another possible source is a grant related to 2017’s Senate Bill 1, which raised state fuel taxes and vehicles fees.
(Source; Napa Valley Register, 10/30/2019, updated 11/6/2019)

In March 2020, the CTC approved for future consideration of funding a project on Route 29 (04-Nap-29, PM R5.6/R6.7) and Route 221 (04-Nap-221, PM 0.0/0.4) in Napa County. Reconfigure an
existing intersection in Napa County. (PPNO 0376). This project is located on Route 29 and Route 221 in Napa County and proposes to reconfigure the existing intersection (Soscol Junction) of Route 29 and Route 221/Soscol Ferry Road in Napa County from a signalized intersection to a full-diamond interchange, with two roundabout intersections on either side of Route 29. This proposed project is to improve traffic operations to alleviate congestion between Napa Valley and towards Interstate I-80 and Route 37. This project is not fully funded; it is currently programmed in the 2018 STIP for $12,819,000 in
regional shares for various components. Construction is estimated to begin in 2022. The scope, as described for the preferred alternative, is consistent with the project scope programmed by the Commission in the 2018 STIP.
(Source: March 2020 CTC Agenda, Agenda Item 2.2c.(1))

In December 2020, it was reported that the CTC approved a $25 million allocation through the Solutions for Congested Corridors program to complete a $64 million funding package and begin construction in 2021 of a double roundabout at the Soscol Junction of Route 29 and Route 221 south of Napa. The improvements will relieve a traffic bottleneck that has long bedeviled residents, workers and tourists to Napa’s famous wine region, and will also deliver important safety and active transportation benefits to the area.
(Source: The Bay Link, 12/3/2020)

In June 2021, the CTC approved amending the STIP to use the funding available through the 2021 Mid-Cycle STIP and share distribution of the federal Coronavirus Response and Relief Supplemental Appropriations Act of 2021 funds (COVID Relief Funds) to increase funding for a project already in the STIP as follows: Route 12/Route 29/Route 221 Soscol Junction Intersection Separation Project (PPNO 0376); program $739K to the CON Support phase in FY 2021-22.
(Source: June 2021 CTC Agenda, Agenda Item 2.1a.(19))

In June 2022, it was reported that the groundbreaking for this project had taken place for the $54 million Soscol Junction construction project at the entrance to Napa Valley. The project will elevate Route 29, and create two roundabouts underneath to regulate Route 221 and Soscol Ferry Road traffic. The roundabouts will control traffic getting on and off the highway. This is similar to what was done for the intersection of I-80 and Route 89 near Truckee. Commuters and drivers over the next two years or so can expect constant change at Soscol Junction. Initial steps include putting a concrete K-rail in the median and shoulders to protect workers and doing stormwater work, according to Ghilotti Construction Co. Following this will be a series of traffic shifts, lane closures, ramp closures and detours as the project winds through five stages with numerous sub-stages. The main thrust of Route 29 traffic should keep moving. But various connections between Route 29, Route 221, and Soscol Ferry Road will be closed at times, often during non-peak traffic hours. Drivers might find themselves going through the nearby business park and airport industrial area. Instead of making a quick turn at the intersection, they’ll take an off-the-beaten-track side trip. Peak delay for extended closures is estimated to be less than 10 minutes. Caltrans will inform the public as each stage and sub-stage brings about specific ramp and lane closures.
(Source: ＄ Napa Valley Register, 6/22/2022; ＄ 9Nc--20C3KbDAuPoHhLkjqYWlB6tDkrOifTG9kqBnScdrY">Napa Valley Register, 7/28/2022)

In June 2020, it was reported that it turns out the county must add a traffic signal on Route 221 when it builds the new jail near the Syar quarry (~ NAP 1.709). The signal is called for in the project environmental impact report. Board of Supervisors Chair Diane Dillon thought she had a better idea for this major south county commute road. She’d like to see a roundabout. Otherwise, traffic on Route 221 would have to stop for a red light when even a single vehicle is leaving the jail main entrance. Public Works Director Steven Lederer said the county has a tight budget for the jail. Taking a step back and trying to turn a planned signal into a roundabout at this point could be problematic.
(Source: ＄ Napa Valley Register, 6/20/2020)

In 1953, Chapter 1836 relaxed the description and extended the route: “A point on [LRN 60] near The Los Angeles International Airport to a point on [LRN 165], the Harbor Freeway, between Santa Barbara Avenue and Florence Slauson Avenues”

This route runs from Route 1 to Route 605, and is most of the proposed/partially constructed Route 90 freeway. A submission of proposed freeways listed LRN 221 as running from the Ocean Freeway (LRN 60) to the San Diego Freeway, and being the Manhattan Freeway, but that doesn't correspond to the 1947 or 1959 routings.