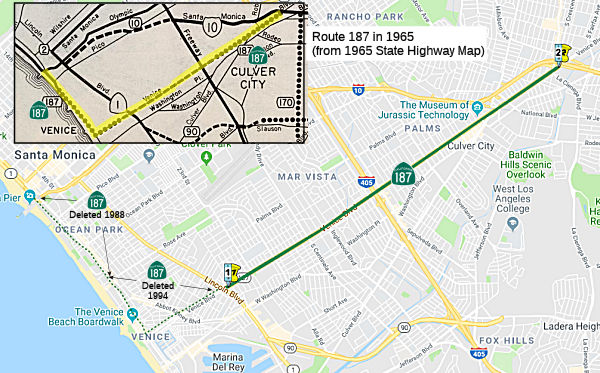 (a) From Lincoln Boulevard to Route 10 via Venice Boulevard.

(b) Upon a determination by the commission that it is in the best interest of the state to do so, the commission may, upon terms and conditions approved by it, relinquish to the City of Los Angeles Route 187 within the city between the route’s western terminus at Lincoln Boulevard (approximately postmile 3.5) and its eastern terminus at Cadillac Avenue near Route 10 (approximately postmile 8.9), if the department and the city enter into an agreement providing for that relinquishment. The following conditions shall apply upon relinquishment:

(2) On and after the effective date of the relinquishment, Route 187 shall cease to be a state highway.

(3) Route 187, as relinquished under this subdivision, shall be ineligible for future adoption under Section 81. 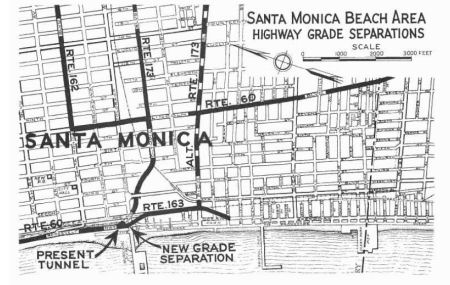 In 1963, Route 187 was defined as the route "Route 1 at a point near Colorado Avenue in Santa Monica to Route 10 via Pacific Avenue and Venice Boulevard; provided that prior to the construction of any portion of this highway the City of Los Angeles shall furnish to the State of California without charge all right-of-way necessary for that portion and the City of Los Angeles and the County of Los Angeles shall enter into a co-operative agreement with the department wherein said city and county agree to pay one-half the cost of plans and construction."

Note that the grade separation here is part of the eastern-most portion of the Santa Monica pier.

In 1988, Chapter 106 deleted the Santa Monica portion of the route, retaining the conditions: "Route 1 at a point near Colorado Avenue in Santa Monica the South city limits of Santa Monica near Dewey Street to Route 10 via Pacific Avenue and Venice Boulevard; provided…"

Note that the bridge log shows a junction with Route 1 at the McClure Tunnel. This dates back to the original 1964 definition of the route, and represents that Santa Monica Pier bridge.

(b) Upon a determination by the commission that it is in the best interest of the state to do so, the commission may, upon terms and conditions approved by it, relinquish to the City of Los Angeles Route 187 within the city between the route’s western terminus at Lincoln Boulevard (approximately postmile 3.5) and its eastern terminus at Cadillac Avenue near Route 10 (approximately postmile 8.9), if the department and the city enter into an agreement providing for that relinquishment. The following conditions shall apply upon relinquishment:

(2) On and after the effective date of the relinquishment, Route 187 shall cease to be a state highway.

(3) Route 187, as relinquished under this subdivision, shall be ineligible for future adoption under Section 81.

Maps based on the 1956 freeway plan show this route as the "Venice Freeway". It was named after the community of Venica, CA, founded by Abbot Kinney in 1904 as part of his Ocean Park tract, envisioning it as an imitation of Venice, Italy. 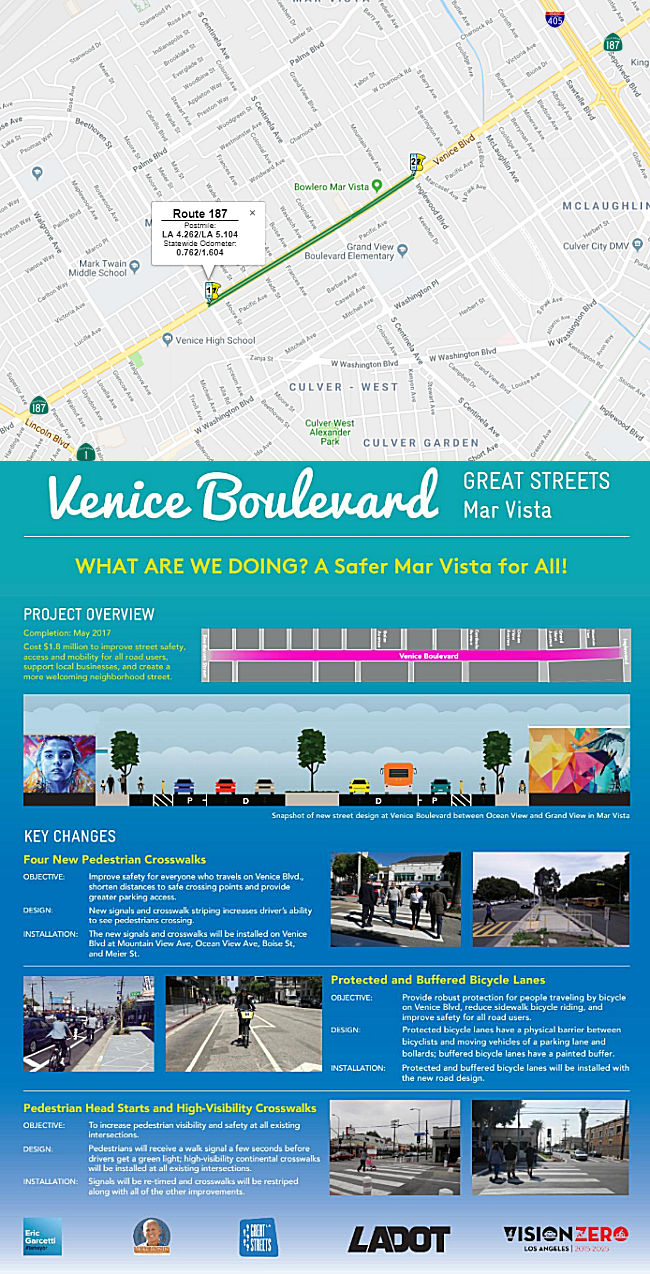 Since 2015 a community outreach process facilitated by Councilmember Mike Bonin and the Great Streets Initiative has culminated in changes focused on making Venice Boulevard safer for people who travel the corridor and supporting local businesses. As part of Los Angeles’s Great Streets initiative, in May 2017 Venice Blvd was reworked to provide four new pedestrian crossings, a safer road design featuring protected and buffered bike lanes, and improvements at existing signalized intersections. This project reconfigured the stretch of road between Beethoven Street and Inglewood Avenue, reducing the number of automobile lanes from three to two in each direction. At the same time, the city’s transportation department added multiple turn lanes, high-visibility crosswalks, and protected bike lanes running the length of the corridor. According to the Great Streets website, the following is a summary of the other changes made (Venice Blvd Fact Sheet):

The changes were first instituted as part of a year-long pilot project aimed at cutting down on deadly crashes. Collision data gathered by the city show that between 2003 and 2016, 360 injuries and five traffic deaths were reported on the 0.8-mile segment of Venice Boulevard. A report on the pilot compiled by transportation consultant Fehr and Peers found that no serious injuries or deaths had occurred during the 12-month trial period. The report was released in December and soon after, the transportation department announced that the project’s lane reconfiguration would become permanent.

According to the Fehr and Peers report, travel times in the eastbound direction increased significantly after the project was implemented, though they came down after a left-turn lane was added at Centinela Avenue. In September, it took roughly 1 minute and 30 seconds longer to travel the eastbound route during peak afternoon hours than it did in 2015. Trip lengths before and after the project were much closer in the westbound lanes. Typical vehicle speeds also haven’t changed much. Drivers heading east traveled 1 mile per hour slower after the changes; those going west went faster by 2 miles per hour.

In March 2019, it was reported that Los Angeles City Council unanimously rejected an appeal Tuesday from critics of a polarizing streetscape project that’s transformed just under one mile of Venice Boulevard in Mar Vista. In the estimation of Councilmember Mike Bonin, who represents the area, the lane reductions and pedestrian safety measures implemented as part of the project have been a success. Opponents of the project see things differently. Mar Vista Community Council member Mary Hruska told the committee that the road reconfiguration had “ignited a feud which has riven our formerly placid and welcoming neighborhood apart.”
(Source: Curbed LA, 3/8/2019)

In December 2013, it was reported that the Santa Monica City Council was looking closely at the impact some of the plans to replace the “structurally deficient” concrete bridge, which connects Colorado Avenue to the historic Santa Monica Pier. There was particular concern that the new bridge allow people of all abilities equal access to the Santa Monica Pier. The future of the Pier Bridge, built in 1939 by the California Department of Highways, has been a topic of discussion for nearly 20 years in Santa Monica. Prior to August 2010, the plan was to rehabilitate the bridge; the decision to replace was made in August 2010. In a 2010 survey, the bridge received a 30.6 sufficiency rating on a 100-point scale. Caltrans says it has inadequate seismic strength, crumbling concrete and cracks in the deck. Also, the sidewalks are too narrow and it has steep curbs and substandard lane widths. The replacement project is eligible for nearly 90 percent federal funding. In the next step, City planners will move forward with environmental impact studies required by both State and national law, a process they said can last from 18 to 24 months.

In January 2018, it was reported that the Santa Monica City Council and Caltrans were holding meetings to discuss the replacement of the Santa Monica Pier bridge. The more than $8 million project comes after the California Department of Transportation deemed the bridge “structurally deficient” and “functionally obsolete.” The City had planned to rehabilitate the the bridge built in 1939, but decided in August 2012 to rebuild the structure after Caltrans said rehabilitation would not be cost-effective and did not qualify for federal funding. The Pier Bridge Replacement Project approved by the Council is eligible for nearly 90 percent federal funding. The project will replace the structure -- which received a 30.6 sufficiency rating on a 100-point scale from Caltrans -- with either a single bridge or two separate bridges. The Environmental Impact Report/Environmental Assessment (EIR/EA) for the proposed project explores the three following options:

To make the current bridge safer, in 2013 the City added a designated walkway that separates pedestrians from bike and vehicle traffic as part of $150,000 in improvements.
(Source: SM Lookout, 1/2/2018)

Later in January, it was reported that City of Santa Monica staff have recommended replacing the current 1939 pier bridge with two separate bridges: one for automobiles, and one for pedestrians and bikes. A new 40-foot bridge would connect pedestrians and bikers to the pier from Colorado Avenue. Emergency vehicles and delivery trucks may use the span during off-peak hours. A lower, second bridge would allow cars to access pier parking from Moss Avenue. The bridge would be span 150 feet over Ocean Front Walk where restaurants currently are located, with two vehicle lanes separated by barriers. The construction would be done in stages, so that the pier would always be accessible. All options would either construct an elevator for handicapped visitors, or a separate ADA walkway cantilevered from the side of the bridge.
(Source: SM Observer, 1/5/2018)

In 1933, Chapter 767 added the following routes to the highway system:

In 1935, these routes were added to the highway code with the following routing:

In 1959, Chapter 1062 extended segment a to "[LRN 43] near Lucern Valley via Monongo Valley", and corrected the spelling of White Water.

Signage on this route was as follows: